Sigh of relief from inside SPC: @bronwyn_powell reports on #SPCsunday 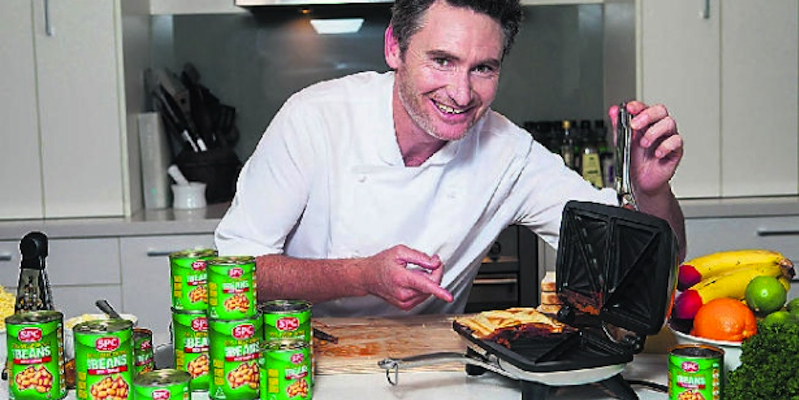 Comedian Dave Hughes participated in an Aussie-made campaign close to his heart.

The story behind SPC is one that has been well told in recent months in the media. The business had been severely damaged by a ‘perfect storm’ of external economic factors: the high Australian dollar, the flood of cheap imported product being sold in Australia below the cost of production here, and the little to no tariffs imposed on imported fruit products from other countries. These are the same countries that impose tariffs of up to 20 per cent on SPC Ardmona products coming into their markets.

But we Aussies love an underdog, and SPC’s fighting spirit, driven by our loyal consumers, ultimately helped put the business back on track and gave us the opportunity to show that SPC is a company that can survive and prosper.

We also have new Goulburn Valley and SPC products set to launch in June.

The social media campaign to save SPC started back in April 2013. A Facebook page, Save SPCA Australian Made and Grown, was set up by Teena Knight, a member of the Goulburn Valley community, from a family of growers in Shepparton spanning over 60 years. Recognising that the fruit industry was in crisis, Teena took to social media, encouraging Aussies to protect the industry that so many peoples’ livelihoods were dependent on.

Teena’s ‘toss a tin in your trolley’ call to action to her audience was direct and simple, as is so often the case in successful people-powered campaigns such as this. The groundswell of consumer support to save SPC had begun.

Fast forward to January 2014. As the federal government remained tight-lipped about whether it was going to support the $25 million funding request from SPC, we wanted to be a part of the save SPC conversation that was snowballing, thanks to a growing audience of consumers which was championing our very survival.

Our first step was to create an SPC Australia Twitter account (@SPCAustralia), which we did to support our Australia Day Baked Beans campaign with comedian, Dave Hughes. Having grown up in regional Victoria, many of Hugheys’ friends and family are employed by Australia’s food industry, so our campaign, encouraging the nation to buy Aussie-grown baked beans, was a cause close to his heart. The overwhelmingly positive support and feedback from everyday Australians during the campaign was extraordinary. They cared deeply about the company and the survival of the Australian farming and manufacturing industries.

Then, just days later on January 30, the federal government declined our request for a $25 million co-investment strategy with SPC’s parent company. The news was a major blow for every SPC employee; from our managing director, Peter Kelly, right the way through to the hundreds of farmers and workers at our processing plants, many of whom have been working for the company for decades.

When Newcastle resident, Linda Drummond, tweeted the simple message: “Guys, to support #SPC let’s have a Twitter Peaches and Icecream night this Sunday Feb 9. Hashtags and Twitpics a-plenty” on February 6 at 9.30pm, I suspect she had no idea about the social movement she was about to start. The consequent creation of the hashtag – #SPCsunday – set off an avalanche of consumer support that was a surprise to everyone, most of all us!

By that weekend, the first #SPCsunday, there had not only been over 7,000 tweets, but most importantly thousands of Aussies were showing support in their shopping trolleys. We saw a 50pc increase in sales on SPC fruit. By February 12 there had been over 10,000 tweets, creating 20 million impressions, and the momentum for #SPCsunday continued, with thousands of consumers sharing recipes, photos and memories of their love for all SPC products. The support for #SPCsunday continues to this day.

To the delight of the thousands of supportive consumers and all of our staff, Coca-Cola Amatil and the Victorian Government announced a $100 million co-investment strategy on February 13, safeguarding the company’s immediate future.

From a personal perspective, it was a huge sigh of relief. Relief because my team and I had for the past 10 months been working hard on some major new SPC product innovations behind the scenes that would bring the company’s offering into the 21st century.

We want to show Australians that we are a company with our eyes on the future, nimbly adapting to their ever changing dietary and lifestyle needs. These needs range from more convenient packaging to enable consumption of our products on the go, to better for you benefits through reducing or removing salt and sugar content.

Our first major innovation is a new fruit soft-serve frozen treat made with 100pc Aussie Fruit called Perfect Fruit. This snack option is all natural, with no artificial flavours or colours, is dairy and fat free, made from 100pc Australian grown fruit and contains less calories than a small apple. It’s enjoying a successful trial currently with a handful of retail partners, including 7-Eleven.

Next up, and just hitting Woolworths’ shelves this month, is a new range of ‘Fruit & Chia’ spreads called Henry Jones & Co. Boasting 50pc fruit, 4pc Aussie-grown ‘superfood’ Chia seeds and available in three delicious flavours – raspberry, mango passionfruit and blood orange – the Henry Jones & Co. ‘Fruit & Chia’ range contains 45pc less sugar than standard jams. It’s a highly versatile product that can not only be spread on toast, but used in smoothies, with cheese plates, or stirred into porridge or yoghurt.

We also have new Goulburn Valley and SPC products set to launch in June. A new Goulburn Valley Coconut Water range offers the health benefits of Australian fruit with a refreshing twist of coconut water. And personal favourites of mine, as I have young kids, is SPC Sneaky Veg, which makes it easier for mums to get vegetables into their childrens’ diets with between 1 and 3 serves of vegetables (pumpkin, zucchini, carrot and potato) in each serve, while reducing salt and sugar by 25pc. Also, SPC My Daily Fruit, which provides 100pc of the recommended daily fruit intake for 2- to 4-year-old kids.

This is just a taste of what is to come from the newly energised, consumer lifestyle-needs focussed, SPC.

With the co-investment strategy in place and new innovation already hitting the market, the future is looking bright for SPC. But we’re all conscious that ultimately it is the consumer who decides what the future holds for SPC, every time they fill their shopping trolley.