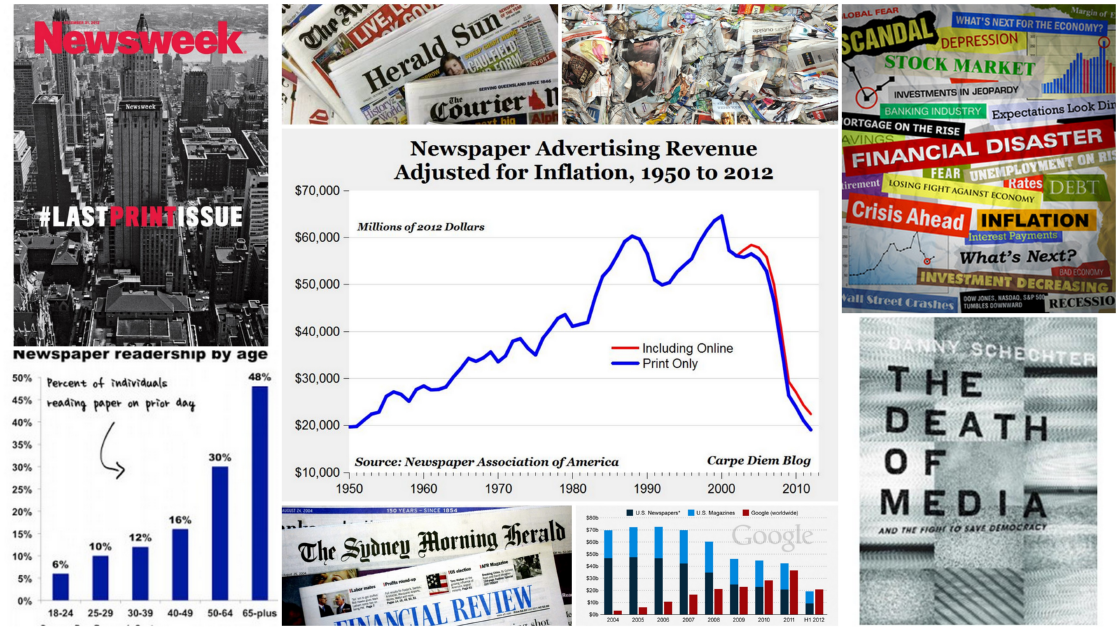 For every pompous hack filing his or her daily lecture to the nation, there are countless others trying to do more and more every day with less and less.

At the same time, if they’re smart, they’re trying to get a handle on the shape of the future. Which way, Journalism? And, not unimportantly, will it pay?

And will it be worth the constant nit-picking and sometimes outright abuse on social media that seems to go with the job these days?

Is the good ship of the traditional publisher going down or is it just shifting course?

And what, in the future, will distinguish a professional journalist from the many competent amateurs already out there with their blogs and their wonky charts?

Journalism academic Jay Rosen recently identified five distinct power shifts between writers and publishers which may give a hint of the way forward.

Not all of us can be technology bloggers Kara Swisher and Walt Mossberg (the subjects of his article), but their story highlights how niche journalism is developing well beyond the traditional specialist publication model.

Rosen observes correctly that modern readers simply have less of a need for publishers. Traditionally, news was bundled together into a single package which tried to include something for everyone.

And there’s the rub. As consumers we are no longer prepared to wade through all the bits we’re not interested in to get to the few stories we do want and the telly listings.

An exchange on Twitter between Australian blogger Greg Jericho (Grog’s Gamut) and Marcus Priest of the Australian Financial Review encapsulates Rosen’s point, and the dire predicament of traditional publishing.

Jericho commented to fellow blogger Paula Mathewson (Dragonista’s Blog) that he’d like to see the AFR return to a pay-per-view model so he could read just its political coverage.

You can read the full exchange here  (thanks to Matthew Lee for Storifying it).

Priest’s defence of the traditional bundle is robust but can’t alter the fact that a growing segment of news consumers – like Jericho, like me – no longer want it.

Encouragingly perhaps, Rosen thinks that puts writers in the ascendant.

As he sees it, it’s simple economics. People will pay for something which is scarce. And that’s no longer ‘news’ which, we all know, is with us 24/7 in a bewildering array of formats, nor the ability to distribute it.

What’s scarce is good journalism which serves its community.

And there are readers – like Jericho, like me – who will pay for it. Just find out how we want it, and give it to us just that way, as I’ve said before (Does journalism die not with a thunderclap but a tweet).

In the Netherlands there’s now an app for that. It’s called DNP and its readers subscribe to specific journalists who edit and market themselves. Seed money included around E25,000 raised through crowdfunding.

According to DNP managing director Jan-Jaap Heij, the journalists don’t have to invest anything, not even a start-up fee and revenue is split at around 50 per cent each between journalist and host.

Heij says the venture started out with 11 people and now has about 200 lined up to join. More details at Journalism.co.uk (and thanks to Margo Kingston for the link).

In Australia independent journalists, like Kingston, are also seeking a paid model online, primarily through subscriptions and donations to cooperative websites.

It’s a model which readers seem to be growing ever more comfortable with, but will it be enough to allow good journalism to survive?

Returning to the scarcity principle, it won’t survive on opinion alone (everyone’s got one, remember) and the trouble with good journalism is that it’s expensive.

In the past the burden of cost was borne by the publisher, who could count on the squillions of dollars coming in from the long-dried up rivers of advertising gold.

Priest was right, if out of date. The publishing bundle supported the writers who attracted people like me and Jericho, invested in training their successors and shouldered the burden of costs when eager journalists fell foul of the law.

Will reader contributions ever be able to cover those sorts of costs?

To quote Kingston, who is building Australians for Honest Politics on a crowdfunding model, “Time will tell…”

And what about access? New Model Journalists are demonstrating their worth in good old fashioned research of publicly available information. But research raises questions and good journalists need to be able to ask them.

Crikey’s Matthew Knott touched on this problem when he reported the office squeeze being felt by the Canberra press gallery, as it struggles to accommodate the smaller online players like The Hoopla (another example of New Model Journalism). His full article (I don’t think it’s behind the Crikey paywall) here:

Politically homeless: Where will the press gallery hacks go?

As Fairfax photographer and gallery committee member Andrew Meares told Knott, sticking with the status quo won’t be an option.

“The change in the future is there’ll be more sole operators rather than people working for big mastheads. As the media landscape changes, the press gallery will have to change.”

Who gets accreditation for the Olympics in the coming brave new world, for example? Who slogs for years on the crime beat or turns up day after day to the magistrates’ courts?

And who supports and defends an independent journalist from intimidation and legal threats, a common response from the rich and powerful?

If good journalism is to survive, these structural questions will need to be addressed but at the moment they’re hardly being asked.

The wheel is still very much in spin. And, to quote Bobby Dylan, there’s no telling who that it’s naming.

In the meantime, we can take some comfort from Rosen and Heij. If they’re right, the winners will be good, old-fashioned journalists.

And readers, of course. Let’s not forget the readers.