Politicians, media and feminists beware: Our youth are paying attention 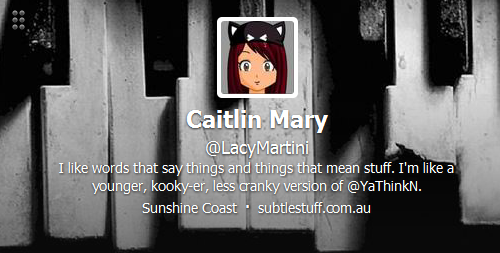 My daughter Caitlin ( @LacyMartini ) had her first foray into public activism yesterday and I have to say I was both thrilled and scared for her.  I was thrilled that as a young person she was entering the political fray with an opinion, taking a stand against sexism and advocating for respect of office.  On the other hand I was terrified that she would cop a lot of flak and that Twitter, being an older more politically aware audience, might prove her assertions right in a hurtful way that ‘adults’ really are not interested in the opinions of youth.

So far, the feedback on her “Cleavage 101: My natural response to #ConvoyofCleavage” video has in general been really positive.  What has really surprised me is how many have congratulated me.  Don’t get me wrong, I am very proud of my daughter, I am proud she has a social conscience and proud of her jumping out of her comfort zone to do it and put herself ‘out there’. But her awesome video has nothing to do with me.  Caitlin is her own person with her own opinions and her own thoughts, interests, worries, reasoning and concerns.  That is probably what I am most proud of.

Many watched her video, though I am not sure that they read what she wrote under the video.  Not only was Caitie offended by the disrespect the Prime Minister has received, most of it sexist, she was also cranky about the flak that people like Jennifer Wilson ( @NoPlaceforSheep ) had received for starting the #ConvoyofCleavage from more famous feminists like Helen Razer.

Being younger this whole, ‘you are not a real feminist…’ academic quibbling and downright nastiness was offensive.  Jennifer’s call to arms captivated my daughter.  It was an inclusive call. You didn’t have to take a photo of your boobs. You could take a photo of your ear lobes or any other body part the Prime Minister had been pilloried over in the media, all to show how ridiculous this attention to our Prime Minister’s physical form was.

Traditional feminists beware. Women like Caitlin are the feminists of the future. They look upon feminism differently. They face different discrimination than we have, they think differently to us.  In fact, I would go so far to say that the likes of Cait are more ‘humanists’ than feminists, not quite comprehending why they need to fight to be equal, why any group of the humans race need to fight to be equal.  If Feminists want to truly help their fellow women they need to embrace all women, young and old, not alienate them…

Media also be aware.  Media need to have good hard think about themselves too. You base of older readers will not last not forever and you will need to pick up your act if you wish to replace them with younger generations.  If the likes of a teenager who is part of the reality TV generation can smell bias and hyperbole, and know when she is being bamboozled with bullshit, you have a very serious problem going forward.

I hope you take the time to watch Caitlin’s video, or, at the very least, read what she had to say and consider :)

Firstly I just wanted to apologise for the bad quality of this video. I didn’t realise I was going to get so riled up about this and I probably should have made 2 or 3 videos about this but nothing is as clear as hindsight right?

Also, if I don’t sound very articulate or educated, that’s on purpose. The convoy of cleavage movement on twitter got some backlash from self proclaimed feminists calling it frivolous and such. For a lot of the people participating though, that was probably one of the very few times they would have experienced or participated in any form of feminist/sexist movement.

I think ‘professional feminists’ need to take a step back sometimes and look through the eyes of the passionate and naive, as opposed to their highly educated and academic selves.

Not all of us can be scholars. So that’s why I tried to do as little research as possible and made a video on my gut feelings and my total natural response to the Convoy of Cleavage.

*Follow me on Twitter if you want to say hi or tell me how much you disagree with me*-https://twitter.com/LacyMartini (@LacyMartini)

Politicians, Media & Feminists beware, our Youth pay more attention than you think, alienate them at your peril

I hope you appreciate my daughters efforts, who would have thought that nearly 19 years ago when that scrawny little thing arrived that she would turn into the intelligent, social justice advocate, musical loving, well read young lady she is today :)