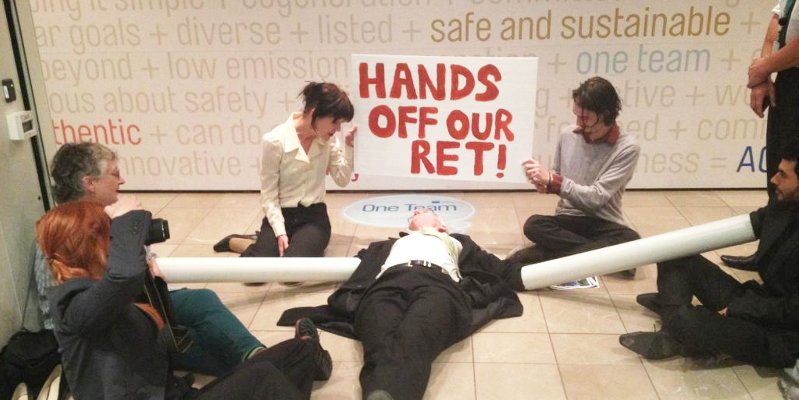 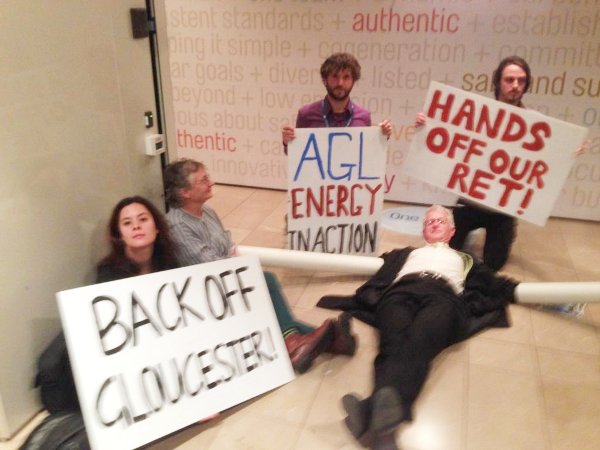 Over 60 people occupied the AGL Energy head office in Melbourne this morning siting down on the 23rd floor offices of this energy producer and retailer. Several people locked themselves together on the 23rd floor. A number of climate guardian angels locked on to the front doors at street level. Why were they there?

AGL Energy, once regarded as a relatively green and environmentally friendly electricity producer, has in recent years bought and accumulated assets in black and brown coal generation and coal seam gas exploration. It is now a major source and polluter of carbon emissions.

Here is a description by Giles Parkinson from Reneweconomy on AGL Energy from June 2014:

“Once the greenest of Australia’s biggest retailers, AGL Energy has changed its priorities since taking advantage of knock down prices to buy the Loy yang A brown coal generator in Victoria (Australia’s largest emitter), and seeking to buy the 4.6GW Macquarie black coal generators in NSW.

“AGL now says that the large scale target of 41,000GWh will be impossible to meet – a claim rejected by renewable developers and big international equipment providers such as GE and Vestas – although it does not say by how much the target should be diluted. “AGL Energy, however, does call for the removal of the rooftop solar component of the RET.

“Household solar PV now no longer requires subsidies to be an attractive proposition for households.”

60+ Australians concerned about #climate change have occupied the headquarters of AGL to peacefully protest polluters. #FloodPolluters

AGL invests in #climate chaos. Phase out investments in #fossilfuels or these protests will continue. #FloodPolluters pic.twitter.com/NJsm6sD2k0

Protestors speak about why they are sitting-in at #AGL headquarters: https://t.co/wwckCoDdwN #FloodPolluters Doesn't Pay to Be a Polluter!

Police Search and Rescue have arrived to deal with locked on protestors #floodpolluters @AGLEnergy pic.twitter.com/HmnwvKcshb

Catherine is here because its urgent. "We need large corporations to stop fossil fuel use NOW" #floodpolluters pic.twitter.com/fSwAuXN8xh

We have been kicked out of @aglenergy as search and rescue prepare to cut our 7 lockons off #floodpolluters pic.twitter.com/CsXDLve489

Climate Angels got AGL covered out front as SES cut off those locked on upstairs incl a WACA member #FloodPolluters pic.twitter.com/dqjBSdxtKb

All 6 from the 23rd floor have been taken downstairs now. Weeew! Awsum job for the climate & our future! #floodpolluters #auspol

More videos of why the protest occurred

Climate Guardian: “If the government won’t listen to scientists, then maybe they’ll listen to angels. What we are saying to them is, it isn’t your place to put our children’s future in jeopardy.”

AGL – you're adding to the problem when you could be part of the solution… #floodpolluters #government-inaction http://t.co/snh8bwlUpU

Why do we still burn fossil fuels when there's a better way that will afford our kids a future??? #floodpolluters http://t.co/JXdkZawVtx

Media reports from Greenleft Weekly, the Herald Sun and RenewEconomy