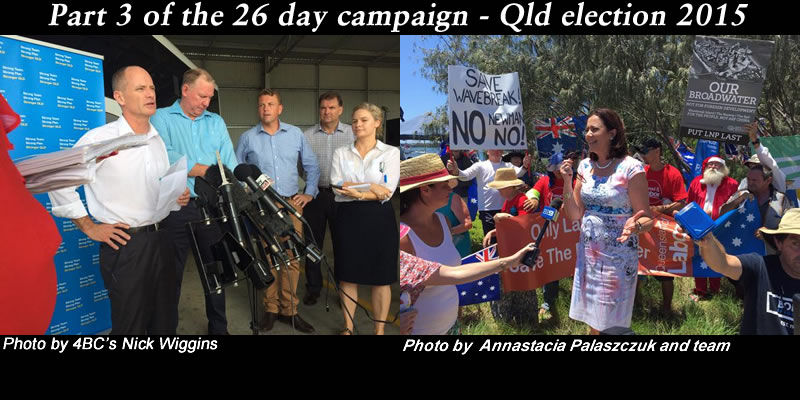 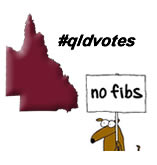 Welcome to part three of the Queensland election coverage. The below entries cover the period from January 22 onwards. To follow the Twitter stream, see #qldvotes.

ABC News Qld: Vote Compass: What are the top election issues for 2015?

7 News Brisbane: An outlaw motorcycle gang member has revealed he has donated money to the LNP as Campbell Newman pushes ahead with claims the ALP is being funded by bikies.

ABC News Qld: #qldvotes ‘This is what I hear’: Newman asked for connection between unions and bikies.

ETU says this is the last word on the matter. @abcnews #qldvotes #qldpol pic.twitter.com/Zc7OJ4Tlav

Asked about proof of bikie/union/ @QLDLabor links, @theqldpremier says it's the public that raises the issue with him. @abcnews #qldvotes

Given all the "excitement' the ETU has issued a followup for ur perusal http://t.co/IFMNWNi3va #qldvotes #qldpol pic.twitter.com/3V5wiPGqYz

Only @QLDLabor will stand up and save the Broadwater, one of the Gold Coast's unique assets. #qldvotes #qldpol pic.twitter.com/bTC2yQy0D6

Off to the Claim the Broadwater rally with @PennyTolandALP. Lovely day to be out on the water. #qldvotes #qldpol pic.twitter.com/z0hnyCRF3I

Warning, Labor candidates may be unionists

Tim Nicholls on promises only for elected candidates

Archive of  The Courier Mail’s frontpages

Campaigning in an electorate the size of Spain

Mackay – For a “Stonger” Mirani

In Mackay a 2nd @theqldpremier news conference on a day when too much democracy is barely enough. #qldvotes @abcnews pic.twitter.com/7MBwDhrdum

#qldvotes Gang fight… The CM was watching something else . pic.twitter.com/7nOefOsfWT

Is this a Chaser joke? Who is this, seen campaigning for all four candidates in Bris Central?! http://t.co/WoywFiv0ND pic.twitter.com/Sb3Giuzxkf

Goodbye campaign jet. For a while there I knew what it was like to be a Rolling Stone. Just a little pic.twitter.com/mdIi5HNve8

@Qldaah Closed in shoes, pants, sunscreen. Everything else can make do

No seat win, no election promise

#qldvotes Election calculator on Morgan poll:
It's Labor with the magic 45 and a 12.6% swing.http://t.co/tqrbpH2ek8 pic.twitter.com/Ty50ZMqCT5

Registered gay relationships might have fallen under the LNP, but gun licenses are up, via @rosannebarrett #qldvotes http://t.co/gd85uRF94X

9 News Brisbane: Peter Beattie looks back at week 3 of the campaign

Top of the #Qldvotes Pops this Friday, goes to: The jingle for the ALP candidate for #Gregory: https://t.co/V5kqTqMrfu. Seen better? Share!

7 News Brisbane: Campbell Newman refers journalists to their lawyers when asked if they will be sued for repeating Alan Jones comments.

9 News Brisbane: Lawsuit funded by LNP: Newman says Alan Jones will have to justify his claims in court

9 News Brisbane: Newman built upon rubbish of Labor: Alan Jones reveals he is being sued by Newman & Seeney.

Alan Jones has my full support for telling the truth about @theqldpremier. I offer him financial support to fight any legal action #qldvotes

HT @BowlerBarrister #qldvotes Newman & another V Jones & another. Don't you worry about that, journos. pic.twitter.com/XPyrDHS3Ef

Hooley Dooley! One of these linen bags just fell from above. As @theqldpremier and journos walked under. @abcnews pic.twitter.com/v88uW9vJgE

LNP Member for Whitsunday Jason Costigan has called #qldvotes "the grubbiest ever". More at: http://t.co/7TQ8ItuNWJ pic.twitter.com/ipjZwu94jc