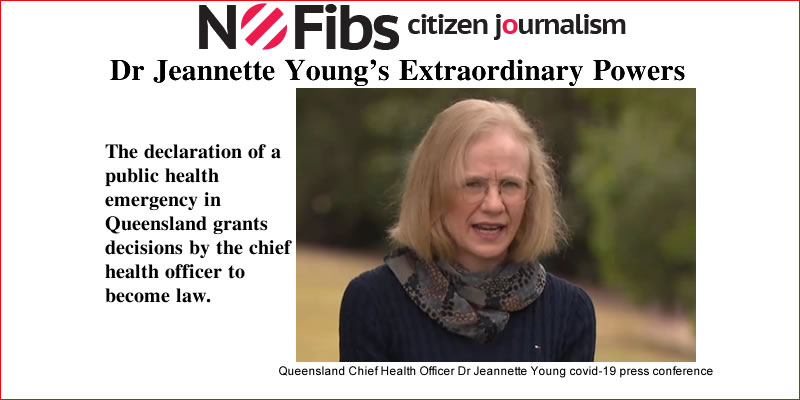 The Australian Medical Association Queensland President Dr Chris Perry addressed the media on the threats and explained how the CHO’s directions are law and how they differ to a jurisdiction like Victoria.

Unfortunately, this explanation didn’t filter through to a September 13, 2020 ABC Insiders episode in which ABC Radio National presenter Fran Kelly turned on the Queensland premier. Not understanding either, the Australian Financial Review’s Phillip Coorey piled on.

As Professor of IP & Innovation Law at Queensland University of Technology, Dr Matthew Rimmer, explained later under section 362b of the Public Health Act 2005, Qld CHO Dr Jeanette Young is granted directions pursuant to such powers.

In an article by Paul Bongiorno entitled, Crass border politics blows up on Prime Minister, Law of Politics at the University of Queensland, Professor Graeme Orr, confirmed that under the state’s legislation, “only a public health officer can let someone out of quarantine to go to a funeral” adding further that “it would be highly inappropriate for a minister to intervene”.

Hotel quarantine in Queensland is directed by Dr Young and is managed by Qld Health staff and Qld Police.

Strategy against covid-19 has always been suppression

As Queensland Deputy Police Commissioner Steve Gollschewski explained, any health direction given by the Qld CHO are lawful.

Dr Young has confidence in Queenslanders

New South Wales Health Minister Brad Hazzard was another who hadn’t come to terms with the Queensland public health orders accusing the government of politics over health but refusing to say what evidence he had of that in an ABC radio interview.

Columnist for The Australian Janet Albrechtsen didn’t understand the Queensland health declarations either. In a piece entitled, “Cruel and unusual, with a whiff of fascism” she accused Dr Young of, We will look with horror at the hysterical health fascism unfolding across this country.

Matters were not helped when ABC 730 presenter Leigh Sales joined the fascism accusation.

Queensland based columnist Madonna King writing about Premier Annastacia Palaszczuk’s luck soon to run out, made the same mistake of not acknowledging the public health declaration that empowers Dr Young, accusing her of being a pseudo-premier. Handing the decision making over to chief health officer Dr Jeannette Young (who is really the state’s pseudo-premier at the moment) also meant she was largely protected from any unpopular edicts.

While it hasn’t been officially announced yet, the next Qld CHO is tipped to be Dr Krispin Hajkowicz from the Royal Brisbane and Women’s Hospital.