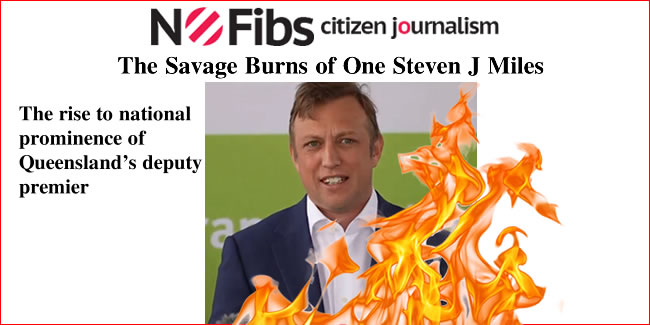 Two major events were underway in Queensland 2020. The covid-19 pandemic hit Queensland and Premier Annastacia Palaszczuk was facing an October state election. She had taken the advice of Chief Health Officer Dr Jeannette Young to close the border to New South Wales. A little over a hundred years earlier, Queensland had also closed the border during the 1919 influenza pandemic. Queensland was quick to close its borders on January 29, 1919, establishing quarantine camps along its southern boundary.

Peter Dutton had one job

Shortly before the state election, federal coalition minister Peter Dutton began gunning for Premier Palaszczuk accusing her of not basing the border closure decision on health advice but doing it for election purposes. What Minister Dutton hadn’t counted on was a furious response from Dr Miles.

“Peter Dutton has one job and that’s keeping our borders safe and he has consistently failed. He’s failed on cruise ships, he’s failed on hotel quarantine. He’s one of the few people to have actually, personally brought covid-19 into Queensland.”

Minister Dutton didn’t like the broadside at all demanding the health advice be released. Of course, Queensland Chief Health Officer Dr Jeannette Young was in attendance at the daily press conferences to give that.

Minister Dutton then tried to blame Queensland for allowing actor Tom Hanks into Australia but it was his own department that had given the approval. Peter Dutton’s department provided federal approvals for Tom Hanks and 11 other family, staff, cast and crew to enter Australia, despite the home affairs minister accusing the Queensland government of rolling out the red carpet for the Hollywood star.

With the Palaszczuk government was returned to office, the long face of Peter Dutton emerging from a sad election night revealed that his attacks had utterly failed.

Yet, Minister Dutton continued to rail against his own state demeaning the health measures implemented to suppress subsequent covid-19 outbreaks in 2021.

Dr Miles responded by saying the federal government was desperate to distract from a range of problems including their treatment of women.

Minister Dutton retreated to his old mate Ray Hadley at 2GB for support. With Dutton sniggering in the background, Hadley ridiculed Dr Miles as a “doctor of unions” and called him a “wanker” on-air. (Steven Miles has a doctorate in philosophy).

In the pre-covid-19 vaccination era, Scott Morrison used a doona analogy to describe states like Queensland who were hiding.

The doona analogy was later rehashed by the Queensland LNP’s David Crisafulli.

PM constantly giving out incorrect information on the number of vaccines Queensland is receiving.

PM needs to spend more time on his duties rather than attacking states.

Queensland’s border restrictions were never supported by the Qld LNP or the Federal Coalition but there’s never any mention of other states with such restrictions.

Three blokes in the Coalition not known for their compassion are piling on the premier.

Hotspot definitions were never allowed to be considered by the PM at National Cabinet.

Still no response from the PM to construct a national quarantine facility in Queensland.

Queensland has since taken up the offer by the Wagner family to build a quarantine facility at Wellcamp Airport.

The PM wished the Queensland success in their quarantine build.

Queensland not accepting the covid-19 Delta virus that Scott Morrison wants to re-gift from NSW.

Queensland and Western Australia continue to be singled out over border closures despite other states such as Tasmania declaring they would take a cautious approach on re-opening.

Scott Morrison, the master of distraction. He has a plethora of international problems but he’s instructing what should happen in Queensland while sitting in the US.

Treasurer Josh Frydenberg got scorched when he claimed the Australian Defence Force (ADF) wasn’t being removed from assisting on Queensland’s border checkpoints for state election reasons.

Peter Dutton tried to help out but ended up overturning the beans on 2GB that the Coalition didn’t support his home state’s border stance.

Treasurer Frydenberg also hit the airways to declare the ADF removal was nothing to do with the Queensland election.

Documents then emerged from the Queensland Deputy Police Commissioner showing the request for the ADF to remain on the border.

Treasurer Frydenberg giggled as he turned the attack back on Dr Miles as a ‘stumbling, bumbling lightweight that no one’s ever heard of’. Of course, the best way to raise a person’s national importance is to mention them on national television.

Not a good day to be a Liberal in NSW

Channel 9 celebrity journalist Tim Arvier copped a blast when he decided to have a go at the Queensland Ambulance Service. Dr Miles noted the two cameras in place before Arvier handed over the piece of paper he was reading from.

The Qantas boss also copped a blast when he attacked states over their border situations.

Dr Miles suggested the Qantas boss concentrate on ways to get Australians home.

On September 6, 2021 Ray Hadley interviewed Greg Hunt on 2GB and put it to him that Queenslanders were laggers on the vaccination program. “And I know Queensland today, published in the Courier Mail, are lagging behind everyone else. And their own reasons for that, the advice from Dr Young and the reluctance of Annastacia Palaszczuk to push the issue,” Hadley said.

Dr Miles exposes the problem with so many people entering and exiting Australia when the international border is supposed to be closed.

Home Affairs Minister Karen Andrews didn’t like that at all launching an attack on the premier and the Olympics.

However, media got their in the end with Minister Andrews admitting the Australian Border Force is the data source to use on Australian returnees. The ABS has now ceased publishing the data.

Queensland Parliament reassured that George Christensen is not a horse

Outgoing federal MP for Dawson, George Christensen, indicated he was dabbling with ivermectin as a treatment for covid-19.

Deputy Premier Miles responded in the Queensland parliament to Prime Minister Morrison over his failure to combat anti-vaxx groups.

Storm in a Brisbane coffee mug

Prime Minister Morrison recently appeared to support anti-vaxxers singling out Brisbane. “They should be able to go and get a cup of coffee in Brisbane when you’re over 80 per cent, regardless of whether you’ve had the vaccines or not.” Qld hits back at PM’s ‘reckless’ coffee comment as MPs stray from state line.

Deputy Premier Miles explained that even the PM has covid-19 vaccination rules for journalists attending his press conferences.