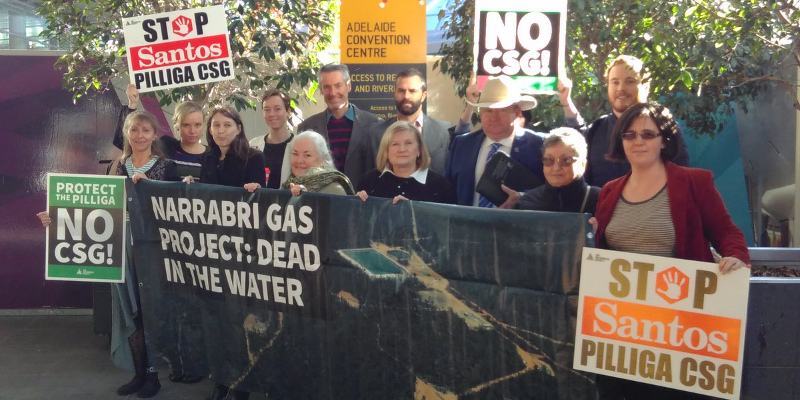 It was revealed at Santos AGM in Adelaide on 4 May 2017 by Chairman Peter Coates that the company business plan is based upon a 4 degrees temperature rise scenario from climate change. This is at odds with commitments outlined in a statement on climate risk disclosure in April to investors.

Santos Chairman Peter Coates replies to a question on climate scenarios for Santos business plan at Santos AGM in Adelaide (Listen to the audio at Market Forces):

Investors failed to pass a resolution calling for more disclosure from Santos over the risks climate change poses to its business. Here is the text of the resolution:

“Resolution 2 – Strategic Resilience for 2035 and Beyond That in order to address our interest in the longer term success of the company, given the recognised risks and opportunities associated with climate change, we as shareholders of the company request that routine annual reporting includes further information describing: (a) Governance: the roles of the board and management in the oversight, assessment and management of climate-related risks; (b) Strategy: the climate related risks and opportunities and asset portfolio resilience of the company’s businesses, operational strategy and financial planning to various climate scenarios, including both 1.5°C and 2°C pathways; (c) Risk Management: how climate-related risks are incorporated into the company’s risk management framework; (d)Metrics and Targets: the targets used by the company to manage climate-related risks and performance against those targets; (e) Public Policy: the company’s public policy positions related to climate change, including those of industry bodies of which it is a member.”

Santos had issued a statement on climate change disclosure a fortnight ago, which seemed to reassure investors, however with this latest statement that Santos business model is aligned with dangerous climate change of 4 degrees Celsius and not in keeping with Paris Agreement climate commitments, maybe investors need to understand the whitewash going on by the Santos board with the statement.

“As a global stakeholder in the energy business we recognise our social and environmental responsibility to pursue strategies that address the issue of climate change. We are responding to t.his challenge in variety of ways….”

“Informed by science: we recognise the global two degree Celsius target and the scale of the global transition required. We recognise the consensus from international climate scientists that the global climate is changing and that human activity contributes significantly to this trend. In Paris, all countries agreed to limit temperature increases to well below 2 degrees (and pursue efforts to limit temperature increases to 1.5 degrees) and achieve net zero greenhouse gas emissions in the second half of this century”

“Somehow, their climate change statement, which contained no new commitments on climate risk disclosure won over investors, which include AustralianSuper and many other major superannuation funds, directed by the Australian Council of Superannuation Investors.

“We wonder how they feel now. Conned? Mystified? We hope so, because whether or not they have been taken for a ride by Santos, or just strong-armed into backing down, their credibility on supporting climate risk disclosure has just evaporated.”

The Guardian asked Climate Council and ANU emeritus professor Will Steffen for his reaction:

“absolutely appalling. [A 4C pathway] really is a worst-case scenario. This is not some minor climatic blip we need to deal with. It’s a completely different climate system.”

Indeed, Superannuation Funds like Australian Super who remain invested in fossil fuel companies to engage with the company hoping to direct them to more sustainable business models, should take note of how Santos treated investors in this instance.

Australian Super did not act in the long term interests of their superannuation clients in voting against Resolution 2 which demanded greater climate risk transparency from the company.

Chairman Peter Coates told investors that the solution for the gas crisis is increased access to unconventional gas. He also told investors that “anything to do with the expansion of the gas industry will address global warming.”, according to Market Forces.

A number of other questions were not answered:

.@SantosLtd chairman Peter Coates dodges question from @Wilderness_Aus about lack of information about location of wellpads in Pilliga

.@SantosLtd chairman Peter Coates claims they disclose political donations in accordance with the law – just not in their annual report!

Worth noting there were precisely *zero* mentions of climate, emissions or disclosure in opening addresses of @SantosLtd chairman & CEO

While Santos says everything they do in exploitation of gas as a transition fuel to replace coal and diesel, assists in reducing climate change, an AGL Energy senior executive outlined earlier this week that there is no longer a place for baseload gas power generation in the Australian electricity generation market, although peaking gas will still be useful in short to medium time frames. Solar plus wind with storage (battery and pumped hydro) are now cheaper than gas, so gas as a major transition fuel can be ruled out.

“The energy transition we have all been anticipating will skip ‘big baseload gas’ as a major component of the NEM’s base-load generation and instead largely be a case of moving from ‘big coal’ to ‘big renewables’,” AGL CFO Brett Redman says in a presentation to the Macquarie Australia Conference in Sydney on Tuesday, according to a RenewEconomy report.

It was also revealed that the Australian National University appears to have re-invested in Santos. In October 2014 ANU announced divestment in seven fossil fuel dominant companies including Santos. They came in for vitriolic attacks from the government for this divestment decision at the time, yet a year later it was assessed that the divestment decision saved the university endowment a futune.

In April 2016 Fossil Free ANU presented to ANU Council a Staff Open Letter of over 450 signatures in support of divestment from the fossil fuel industry.

Re-investment with Santos is bound to increase agitation from staff and students to pressure ANU to further divest it’s endowment from fossil fuel companies.

There was a pointed question from ANU student Bella Himmelreich to ANU vice-chancellor Brian Schmidt on divestment on May 1st on the ABC Program QandA. Maybe the university needs to reassess their investment policy again?

The AGM comes as Chinese equity company Hony Group bought shares to increase their stake in Santos up to over 15 per cent of shareholding on Wednesday.

Meanwhile the grassroots campaign by farmers and landowners continues against Santos Coal Seam Gas and fracking projects. Not only is the Santos business predicated on warming the planet by 4 degrees but fracking and coal seam gas will also likely to cause contamination of aquifers and agricultural land and threaten health of rural communities.

A small group of landowners under threat from coal seam gas and fracking protested outside the AGM.

Australia was part of the UN climate change conference at Paris in December 2015 that formulated the landmark Paris Agreement that set a target of limiting global warming to well below 2 degrees Celsius and strive to meet a 1.5 degrees target. Australia formerly ratified the agreement in November 2016 during the UN climate conference in Morocco.