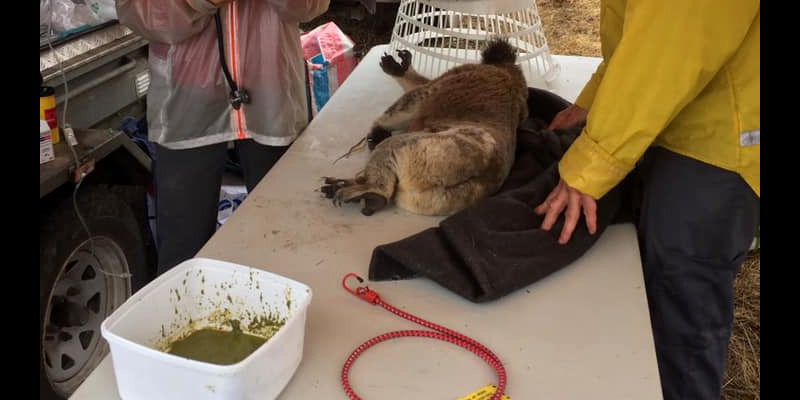 Since No Fibs published the first news story on the Portland Koala Massacre, the number of dead, injured, starving and trapped koalas on the Victorian blue gum timber plantation near Cape Bridgewater is no clearer.

According to a Rob Hadler, spokesperson for South West Fibre (SWF) – the company who carried out an approved timber harvest at the site in late 2019 – when the property was handed back to the owner there were “about 76 koalas all in good health”.

The ABC published a count of around 80 rescued and 40 euthanised koalas.

Helen Oakley, who brought our attention to what was happening on the property, told No Fibs:

The numbers just called through tonight (Monday) to me by a lady in the animal group, she said the department of environment has said around 200 koalas. If you do the maths you’ll get more than that.

Oakley estimated a count of around 250.

Until authorities complete their search of the property the number of koalas trapped inside the property after SWF handed it back to the owner will not be known.

Oakley also raised concerns about the quality of habitat trees left for the koala population after harvesting.

Apparently they logged the better sections because the other trees up the front, which are all little, didn’t grow very well. They were all windswept and miniature.

Friends of the Earth claims at least 500 koalas were killed once authorities count koala carcasses that were bulldozed into slash piles.

On Monday The Project reported the property had been declared a crime scene and fines could be levelled against anyone found guilty. This news came after Victorian Environment Minister Lily D’Ambrosio described the koala deaths as “a crime”, and ABC Radio host Virginia Trioli interviewed Premier Daniel Andrews on the issue.

The man accused of a “massacre” of dozens of koalas in the state’s south-west says he will accept the legal consequences of his actions, but that the incident, which has caused a global outcry online, has been blown out of proportion by activists.

SBS reported the landowner is horrified by what has occurred.

There are also inconsistencies in reports about the size of land cleared.

The Sydney Morning Herald reported the property is “60 hectare”, but when No Fibs spoke to SWF spokesperson Rob Hadler, he said: “I think it was about 22 hectares in size and we left about 12 hectares”.

The Office of Conservation Regulator is investigating and reports on Monday showed police were positioned around the property.

It takes a brave person to speak out publicly about the ills of an industry in a rural area reliant on that industry.

She took the photos that Friends of the Earth published on their website.

The first thing Oakley told me – so I reckon she wants it on the public record – is that she had nothing to do with Friends of the Earth website statement. According to her, the organisation lifted her photos from Facebook, that’s all.

While the scale of the alleged crime is still coming to light, speculation about the wildlife management permissions logging companies rely on has circulated on social media.

A Queensland wildlife carer posted a passionate video to Facebook claiming Australian Bluegum Plantations (ABP) – a former owner of the Victorian logging site at the centre of the koala massacre, according to Friends of the Earth – had been given permission to hunt, take or destroy wildlife.

ABP have received authorisation to disturb koalas under Section 28A (1A) of the Wildlife Act and implemented an approved Koala Management Plan.

No Fibs has found this may not be the case. The key principle is an approved Koala Management Plan.

The wildlife carer misinterpreted the location of Section 28A (1A) in the Act reading from the text below (page 62):

The correct location is (page 64):

Authorisation to disturb koalas under Section 28A (1A) of the Wildlife Act with an approved Koala Management Plan is likely a standard feature on timber plantations with koalas.

No Fibs: The press release stated the company abided by the Koala Management Plan, are you going to make that publicly available? Could I get a copy of it please?

I think I could do that, when I get home I’ll see if I can get a copy of it and send it to you. We use the management plan to manage our statutory obligations.

No Fibs: Did you have authorisation under Section 28A (1A) of the Wildlife Act?

No Fibs: How many trees were actually left on the property?

I think it was about 22 hectares in size and we left about 12 hectares.

No Fibs: Any idea how many trees that is?

Significant questions remain about this incident.

Do the claims of the landowner about large numbers of starving koalas prior to the land clearing operations on his property last week stack up?

Did South West Fibre grossly underestimate the number of animals left on the property?

What responsibilities, if any, did the landowner have about the care of the koalas left inside the property after it had been handed back for him?

No Fibs will continue to seek answers.

No Fibs was the first news site to report on this incident. Here’s a wrap of the way things unfolded in the mainstream media…

The office of Victorian Minister for Energy, Environment and Climate Change Lily D’Ambrosio has not yet responded to No Fibs.

No Fibs is still waiting for South West Fibre to forward the Koala Management Action Plan.