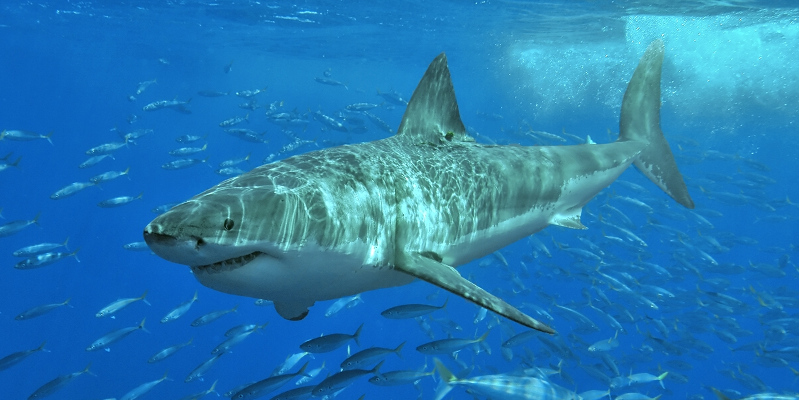 John Englart published this article on The Great White shark, climate change and ocean carbon cycles on his climate blog.

The latest media ‘hysteria’ about shark attack arises from a tragic fatal bite incident when WA teenager Laeticia Brouwer was mauled by a shark at the popular surf break – Kelp Beds – near Esperance (south coast of Western Australia) just before 4pm on Easter Monday (2017).

The paramedic who was first on the scene said the teenager suffered tremendous blood loss and couldn’t be saved despite quickly receiving first aid.

While sharks are relatively common in coastal waters, attacks are exceptional given the overwhelming presence and numbers of people in the surf zone. You are more likely to be killed in a road accident, riding a horse or a vending machine, than by a shark.

Federal Environment Minister Josh Frydenberg says WA isn’t doing enough to protect people from sharks urging shark culls and drum lines, according to the West Australian. “In light of the recent shark attack, the Commonwealth would welcome any proposal to protect human life first and foremost,” he said. “This could include the newest drum-line technology, shark exclusion nets, culling or other measures which WA sees fit.”

WA Fisheries Minister Dave Kelly has ruled out the idea of a shark cull in response, according to the ABC. “We’re not going down the path of a cull because there’s no evidence that it actually makes our beaches safer,” he said, “…no evidence that that actually reduces the likelihood of future attacks,” Kelly said.

Like on climate change, we are seeing the issue of shark conservation or culling being politicised for short term ideological battle rather than long term concern for public safety, public education and options for shark incident mitigation.

Our Federal Environment and Climate Change Minister Josh Frydenberg should know better. The environment and climate change is his portfolio after all. The oceans are the domain of sharks and they have an important role to play as apex predators as part of the ocean carbon cycle.

When we swim in the oceans we need to be mindful of the risks involved, including utilising the latest in public shark warning and repellent devices.

Mindless culling of sharks will not actually reduce the risk of shark attack without doing great harm to the ocean ecosystem trophic structure. It is as apex ocean predators that sharks do us the greatest service in maintaining the ocean carbon cycle and help keep carbon sequestered in coastal sea areas (Blue Carbon) to help us mitigate climate change.

Climate change and warming sea surface temperatures (SSTs) are one factor which might be affecting shark behaviour and shark bite incidents. I examined this issue in an article that looked at Sea surface temperatures unusually warm around Australia in 2013. I updated this article on 9 January 2014 with a section on Sharks and warming waters. The evidence is still very poor in linking frequency or number of shark attacks to climate change factors. But we do know climate change is affecting ocean systems a number of ways.

“Climate change is affecting the open ocean through an interaction of warming, stratification, deoxygenation and acidification, with subsequent effects on a wide range of top predators.” says a February 2015 article in Deep Sea Research II: Topical Studies in Oceanography. (Hobday et al 2015)

Sydney Morning Herald environment journalist Peter Hannam has written a major feature article over the 2017 summer: Shark alert, in which he argues that many of the shark bite incidents on the east coast of Australia appear to be just taste testing with an initial bite incident that often is not followed through with any subsequent attack. The fatal nature of some of the incidents mostly results from the extent of blood loss involved rather than damage to major organs.

Senior CSIRO scientist and shark researcher Barry Bruce was quoted in the article that he is doubtful the evidence is there to support any links between shark bite incidents and changes in water temperature. “They have been some upwelling events in the past when there’ve been no shark attacks,” he says.

Hannam followed up his first article on the human/shark conflict with an article on the race to find a reliable shark repellent. In the third article in the series, by Emma Young, the failed Western Australian hazard reduction policy of baited drum lines and culling is looked at in depth, as well as a vox pop of beach goers on the issue.

Whether this North Atlantic pelagic shark behaviour of association with SST fronts, including by White Sharks, can also be assumed for Australia’s white shark populations, is a relevant question. Are Sea Surface temperature gradients changing and moving due to climate change? and how may this affect shark presence and behaviour?

We know that Juvenile white sharks (Carcharodon carcharias) use estuarine environments in south-eastern Australia such as Port Stephens (NSW) and Corner Inlet (Victoria). They are shark nurseries. It is thought birthing takes place in Bass Strait with the pups initially spending time at Corner Inlet nursery before migrating up to the Port Stephens nursery, according to this 2013 interview (youtube audio) with Barry Bruce. Similar nurseries in South Australia or Western Australia are yet to be found.

The presence of sharks in coastal waters is normal behaviour, according to the CSIRO. Many of the smaller white sharks (up to 3 metres in length) we see are juveniles which prey upon mostly fish. The adult sharks, often 4-5 metre in length, are seldom seen close to shore. The CSIRO argue there are far more instances of smaller white sharks in the vicinity of people with no aggressive behaviour. The presence of white sharks is not always a good indicator of attack risk.

“Most of the time when sharks and people are in the same proximity with each other, sharks don’t bite people. And this is one of the real challenges in understanding shark attack, because we’re looking at the exception rather than what normally happens. There will be a relationship between the number of attacks and the numbers of sharks, but it’s not a straightforward relationship. You can have areas where there are a lot of sharks and no attacks. You can have areas where there are very few sharks and an attack.”

Ocean ecosystems are warming and changing and this is likely affecting shark behaviour in a number of subtle ways including predator-prey behaviour resulting from changes in prey abundance due to human impacts on oceans through pollution, fishing.

Sharks perform a vital role as apex ocean predators, and this has the effect of keeping carbon stored in sediment on the ocean floor. Research published September 2015 by a Deakin University team with Dr Peter Macreadie from the Blue Carbon Lab outlines the importance of preserving sharks. From a media release:

“For a long time we’ve known that changes to the structure of food webs – particularly due to loss of top predators such as sharks – can alter ecosystem function,” Dr Macreadie said.

“In science, the consequence is what is known as a trophic meltdown. With the loss of around 90 per cent of the ocean’s top predators from around the globe, the occurrences of trophic meltdowns are now widespread.”

“In our article, we report the trickle down effects on the capacity of the oceans to trap and store carbon. There are multiple ecosystems by which this can occur, but the most profound examples occur in the coastal zone, within seagrass, saltmarsh, and mangrove ecosystems – commonly known as ‘blue carbon’ ecosystems.”

“In the case of sharks and turtles, sharks eat turtles, which in turn eat seagrasses. But when sharks disappear, the turtles have a tendency to run wild and the seagrass ecosystems cannot sustain the turtle populations. The turtles overgraze, and, as a consequence, we’re seeing large reductions in seagrass carbon stocks.”

As an example, Dr Macreadie described how hunting of sharks had reduced their numbers in Shark Bay, Western Australia, which had led to carbon storage rates less than half the amount in areas which were abundant with sharks.

“At the extreme level, we see turtles without predation pressure eating themselves out of house and home and destabilising carbon stocks that have been locked away for millennia,” he said.

The loss of sharks and other top predators from the ocean through hunting, culling and bycatch interferes with the ocean’s carbon cycle and can accelerate global warming, Macreadie warned.

“Stronger conservation efforts and stricter fishing regulations are needed to reinstate the important role that predators play in the ocean’s carbon cycle,” he said. “It’s about restoring balance so that we have, for example, healthy and natural numbers of both sea turtles and sharks.”

Predators continue to be harvested unsustainably throughout most of the Earth’s ecosystems. Recent research demonstrates that the functional loss of predators could have far-reaching consequences on carbon cycling and, by implication, our ability to ameliorate climate change impacts. Yet the influence of predators on carbon accumulation and preservation in vegetated coastal habitats (that is, salt marshes, seagrass meadows and mangroves) is poorly understood, despite these being some of the Earth’s most vulnerable and carbon-rich ecosystems. Here we discuss potential pathways by which trophic downgrading affects carbon capture, accumulation and preservation in vegetated coastal habitats. We identify an urgent need for further research on the influence of predators on carbon cycling in vegetated coastal habitats, and ultimately the role that these systems play in climate change mitigation. There is, however, sufficient evidence to suggest that intact predator populations are critical to maintaining or growing reserves of ‘blue carbon’ (carbon stored in coastal or marine ecosystems), and policy and management need to be improved to reflect these realities.

Human tragedies will inevitably continue to occurr if humans continue to play and enjoy the marine environment. That is a fact of life. Survivors, and victim families and friends need to be socially supported.

We have a natural response of horror of the threat of being bitten and potentially eaten alive by a shark, even though the threat is statistically very very small. The media’s maligning sharks for their fearsome capacity as an apex predator and continued framing the issue in highly emotional and anthropocentric weighted criminalising language does not assist the acceptance of the risk process.

Media reports often use sensationalism and emotive language such as ‘rogue shark’, ‘lurking’, ‘stalking’, or ‘menacing’ and other words borrowed directly from human criminology, to describe shark behaviour. This is wrong and a projection of human behaviour falsely onto sharks. Adrian Peace, a Social anthropologist from the School of Social Sciences at The University of Queensland asks a pertinent question at The Conversation on language and Why do we treat sharks like criminals?. Perhaps some of our journalists reporting on shark bite incidents need to read this, repeatedly.

We must keep in mind when we swim in the ocean we are entering the shark’s domain with all the risk that may entail. In terms of perspective, Professor Culum Brown, an associate professor at Macquarie University, said in Hannam’s article, “You’re more likely to get killed by bees or by horses than by sharks.”