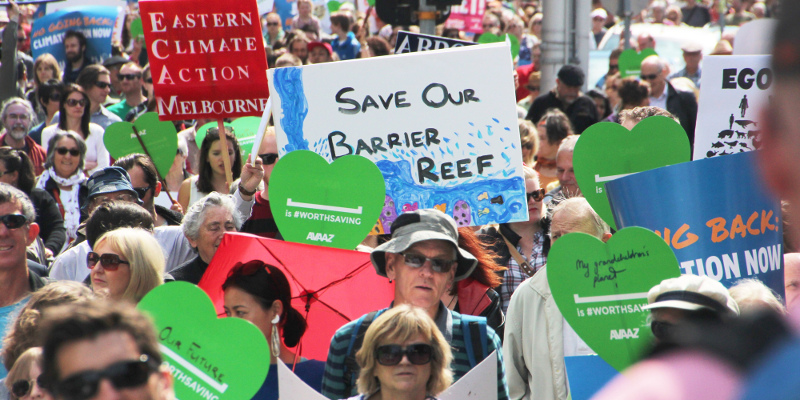 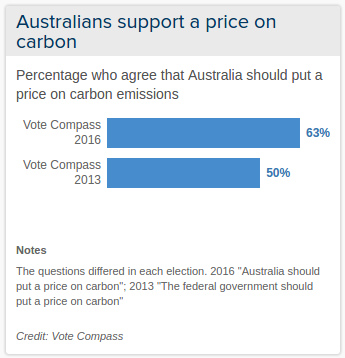 Support for carbon pricing has increased from 50 percent at the Vote Compass survey in 2013 to 63 percent in 2016.

For the question on more action on climate change the results also incresed by 13 percent from 61 percent in 2013 to 74 percent in 2016.

It was clear back in 2013 that climate change was not a key determinant of how most people voted but the disunity in the Labor Government and a very tight attack campaign led by Tony Abbott. People voted out the Gillard/Rudd Government rather than giving a mandate to Abbott. 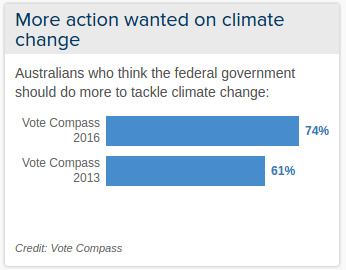 John Hewson, a former parliamentary leader of the Liberal Party, told the ABC that the electorate had long been ahead of the government on climate policy.

“I know the party feels they won the last election on the carbon tax but the bottom line to me is they won the election as a vote against the Rudd-Gillard-Rudd government,” said Mr Hewson.

“Abbott just ran a massive scare campaign on the carbon tax and he was helped in that … [Labor] never tried to counteract that at all, they never tried to market why they were doing it and linking it with the science and trying to educate the electorate.” Hewson said.

Votecompass also noted that there was substantial support at 70 percent of people in rural communities that wanted to see the government take more action on climate change. Rural support for carbon pricing was at 57 percent.

Centre of Excellence for Climate Science director Andy Pitman highlighted that traditionally rural and regional voters have been very sceptical on climate change, but that extreme events such as heatwaves, drought and floods have really confronted people.

Information such as long term changes in stream flow as exemplified in this chart of Perth’s rainfall tweeted by climate scientists:

I think the crossbench got it wrong that the Abbott government had a mandate to abolish carbon pricing based upon the ‘axe the tax’ slogan, when all opinion polls and the votecompass survey showed people consistently wanted greater action on climate change while only a minority of 36 percent opposed carbon pricing.

During the years of the Abbott/Turnbull Government the community feeling has, if anything, increased as emissions have risen.

In 2014 there were consistent polls showing Climate leadership demanded of Australian Government. People are putting 2 and 2 together and have the expectation that extreme weather events will get worse, and that this trend is linked to climate change.

The Abbott Government rolled back the Renewable Energy Target despite 50 per cent of Australians saying that the Federal Government should prioritise support for the renewable energy industry over the coal industry. Ony 6 per cent favoured priotising coal industry, and 28 per cent thought both industries should be treated equally. 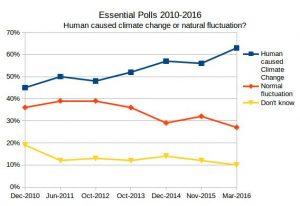 Just before the Paris UN climate conference a Lowy opinion poll conducted in October-November 2015 found that over half of Australia’s population believes that climate change is “a serious and pressing problem. We should begin taking steps now even if this involves significant costs”.

Professor Peter Christoff identified in September 2015 that if Turnbull turned back the years and adopted the policies when he was the opposition leader he would likely carry the election. “As the contradictions mount, ditching rather than defending weak climate policies seems a much wiser political option for Turnbull, and better for the nation too.” said Christoff.

Turnbull had the opportunity to really shine as a world leader at the first day of the UN climate change talks, but there were no new initiatives or major changes announced. He was the master of style over substance, and a great disappointment after his stance as opposition leader in 2008 and his frank opinions on climate change from 2010 and 2011 where he accused Tony Abbott’s climate policy as ‘bullshit’.

So why are the votecompass survey results important? Participation is self selecting by people visiting the website. But this is balanced by the enormous numbers of people that have participated in the Votecompass survey.

Normal poll samples are around 1000 people with a margin for error of 2-3{17ac88c265afb328fa89088ab635a2a63864fdefdd7caa0964376053e8ea14b3}. Over half a million people have logged in to Votecompass during this election. Not everyone answers every queestion, but the numbers are still significant. The interim findings published by the ABC website are based on 252,309 respondents to the carbon pricing question, and 20,703 respondents to the climate change question, from people who participated in Vote Compass from May 8 to May 31, 2016. Like in traditional polling, the data has been weighted to ensure the sample reflects the Australian population.

An essential poll conducted in March 2016 found that 57 per cent of voting aged people think Australia is not doing enough to address climate change.

A further essential poll in May 2016 found that climate change a vote changer with 57 per cent of voting age people approving of the Labor Party’s higher 45 percent climate targets and ETS that more closely match the science and carbon emissions.

The government’s budget failed to even mention climate change and the necessity for transition to a zero carbon economy. It could have easily have formed a part of the jobs and growth plan, but didn’t.

This year’s bleaching of 93 percent of the Great Barrier Reef, and the poor coral reef prognosis without substantial and rapid climate action, is almost certainly an important consideration for many Australians even if they have never visited the reef in person. The censorship of the UNESCO report into tourism and world heritage sites was also not a positive reflection on this government.

The Government is standing by it’s low 26-28 percent target by 2030. It’s Emissions Reduction Fund has bought offsets for just 7 percent needed to meet the target. Even though it is clear that after the election it will need something like a baseline and credit emissions trading scheme, similar to Labor’s electricity ETS, it has refused to divulge it’s plans (See Lenore Taylor on this: Greg Hunt plays the long game on his glaringly obvious emissions trading scheme).

Labor has released a comprehensive climate policy emphasising a 50 percent renewable target, an emissions reduction target of 45 percent by 2030, and a just transition away from coal fired power for Australia. The policy has areas of silence such as failing to mention export coal or phaseout of fossil fuel subsidies, and cleaning up political donations.

The Greens have a 90 percent renewable target by 2030 and emphasize rapid transition of Australian coal fired power and a carbon tax to be applied to export coal. 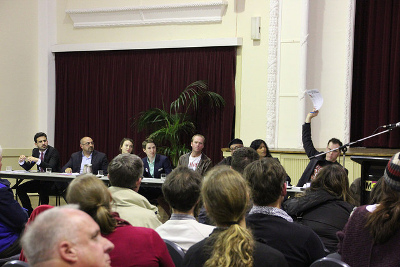 Wills2016 climate debate with 8 of 9 candidates. Hands up which party has a negative emissions policy Photo: John Englart

It is clear that negative emissions technologies will need to be researched and developed at scale and applied before the middle of the century if we are to meet the well below 2 degree target enshrined in the Paris Agreement. At a candidates debate for the seat of Wills a question was asked of candidates if their party has a policy on negative emissions. Only the Socialist Alliance candidate Zane Alcorn put up his hand.

Clearly, there is much more policy work to be done by all the major parties, including the Greens, in transitioning to a zero carbon economy to meet our international obligations that Greg Hunt signed Australia up for on April 22, 2016 in New York