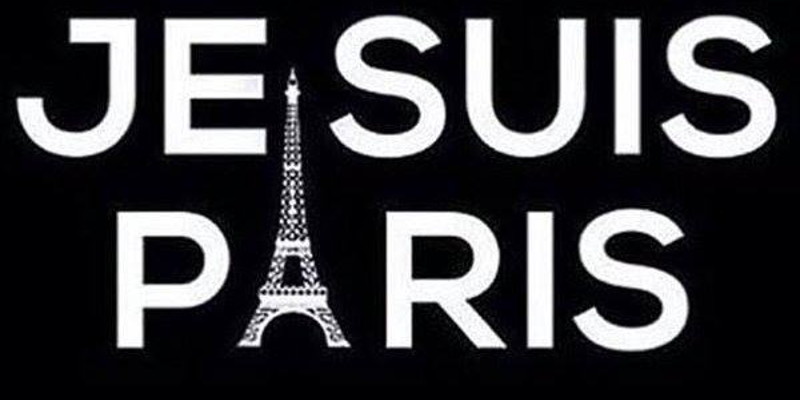 People around the world will have woken this morning to news of the horrific terrorism attacks in Paris on a Friday night. Over 120 dead, more than 200 injured, many seriously, at six sites. Seven of the eight attackers blew themselves up with strapped on suicide vests and an eighth attacker was shot by police during a storming of a concert theatre. Some of the attackers are feared to be still at large.

President Francois Hollande declared a State of Emergency for France and closed the borders. Parisians have been told to stay at home. Paris, the city of lights, went metaphorically dark as the lights and sparkle on the Eiffel tower were turned off.

Today in Paris public places are closed as the nation observes three days of mourning with the nation’s security at its highest level.

A deep insight by Manu Saadia writing for Fusion.net: The Paris attackers hit the city’s young, progressive core. He argues the terrorists in Paris attacked the progressive and youth heart of Paris. They didn’t go for tourist sites, or for the French political heart, but for places young and progressive Parisians hang out on a Friday night: the national stadium which is an ethnic uniting force, restaurants and bars in trendy working class neighborhoods, and a concert venue.

It seems this was a co-ordinated attack on social gatherings of people to maximise terror. It shows all the hallmarks of an AlQuaeda/ISIS attack. In fact ISIL has now issued a statement officially claiming responsibility for the attacks (Skynews article).

My opinion is that the people who initiated this reign of terror are motivated by hate and deep fundamentalism and abhorrence for civil society, human rights or life.

On the same day as the Paris attacks people of Lebanon also suffered from terrorism. There were two deadly Beirut explosions which killed 43 people with ISIL claiming responsibility. This hasn’t featured prominently. Just read this heartbraking story of a father preventing an even greater loss of life in Beirut at the cost of his own life. This is true heroism. The Beirut bombings were just as clearly an attack on civil society values and ordinary people. The barbarity of ISIL is what is causing people to flee Syria and Iraq, to seek relative safety as refugees.

My friends and colleagues know I am in France, but most were unaware of my location. I can assure them I am currently safe.

Friday evening I attended a local climate meeting in Nantes on ‘Global Warming: who profits’. I had to turn off my phone during the meeting as I was getting a sim card error. After rebooting the phone after the meeting I saw I had a text message from my daughter asking when I would be home. I replied twice, but the text messages failed to be delivered. This would have been 30-45 minutes after the initial attacks. Perhaps a telecoms security clamp down? Possibly. I eventually was able to call her to say I was on the way home.

When I got back to our apartment I heard the news about the terrible massacre taking place once I accessed my twitter feed.

When we passed through Paris on 30 October – 1 November armed gendarmes were around major public places. There was a heightened security alert then.

Even in such a horrific situation as Paris last night, peoples humanity opened up. Reports of Paris Taxi drivers turning off meters to drive people home to safety. The hashtag ‘PorteOuverte’ was quickly used by Parisians to advertise safe places: open doors. But the hashtag quickly was promoted, retweetted to a level of providing less usefulness to those actually seeking shelter.

Al Gore’s 24 hours of climate reality was being broadcast live from beneath the Eiffel Tower. In two tweets the broadcast was suspended “Out of solidarity with the French people and the City of Paris, we have decided to suspend our broadcast. Our thoughts and prayers are with all those who have been affected by today’s events”.

Christina Figueres, the executive secretary of the UNFCCC tweeted “In deep pain. Standing in solidarity with Paris and the whole of France”.

If the United Nations climate conference doesn’t go ahead, then the terrorists will have won a victory through fear.

Will COP21 continue? Last night I said I didn’t know. But if it doesn’t go ahead, then the terrorists have won a victory through fear. That is not something that anyone wants to see. So I think the conference will proceed. There will be substantial gendarme and army presence on the streets of Paris. And lots more security.

But as with the response to the Charlie Hegbo attack and murders earlier in the year, it is important to stand against fear and intimidation. Just as Parisians united as #jesuischarlie, it is time for us to unite as #jesuisparis.

I stand with Paris.

#JeSuisParis Compassion without borders, to the innocent victims in Paris but also of course to those in past days in Beirut, Baghdad,Sinai

Hulot: Canceling COP21 because of the attacks would be a capitulation

Nicolas Hulot, special envoy of President Francois Hollande for the protection of the planet in an interview with Arnaud Gonzaga, was adamant that the climate conference should proceed despite the attacks and threat of terrorism.

“We must understand that the issue of global warming is not just an environmental issue: it is very directly related to the issues of international security and terrorism. So yes, we must maintain the COP21, precisely because of attacks! When millions of people flee their lands because of drought, floods or typhoons, it exacerbates inequality and exclusion in countries where terrorism is paramount. The battles for access to resources and energy are the seeds of tomorrow’s wars, in both East and West.”

To the question, ‘So more than ever, the climate remains a central issue?’ he responded:
“Yes, we must use these tragic events to forget our petty differences and to focus on the essentials. The main thing is the future of humanity. Look at the war in Syria: we know that the climate issue has contributed although it does not explain everything, of course. Fleeing desert land caused ​​by droughts between 2007 and 2011, partly explain the tensions in the populations of northern Syria in the Syrian conflict.”

Foreign Minister Laurent Fabius released a statement (fr) from Vienna where he is discussing international terrorism, Daech, Syria and Iraq. He confirmed that the climate talks will go ahead.

As Paris goes dark, the world lights up in solidarity

The Age: Paris attacks: Melbourne to light up red, white and blue in support of Paris terror victims

#Sydney Opera House comes out in solidarity with #Parisattacks pic.twitter.com/sPOsIEJB0y

One of our iconic landmarks in Australia(Adelaide)showing it's?n support 4 Paris in these terrible times #respect ?✌ pic.twitter.com/YYxaOdn5IX

Canberra is in #solidarity with #Paris tonight. pic.twitter.com/bWCaNGQQt6