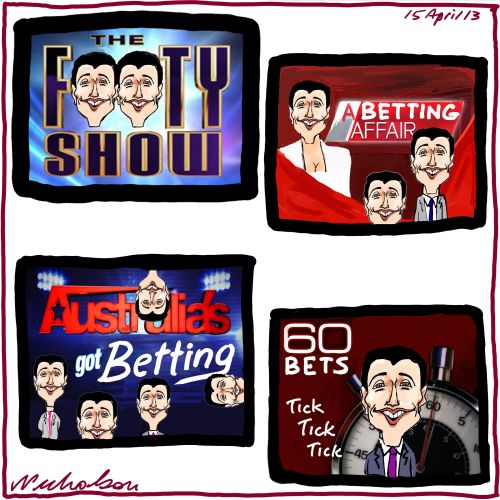 Cartoon by Nicholson from “The Australian” newspaper: www.nicholsoncartoons.com.au

There’s a script floating around Canberra, called the “Gambling Action Response” script. It’s a succinct little document that gets dusted off and put into action every time someone has the temerity to suggest that maybe, just maybe, we need to do something about the widespread incursion of gambling into every corner of our lives.

Remember poker machines? They used to be THE hot gambling topic not so long ago. There was strong public support for changes to the poker machine industry and the pokies themselves, and the cause was led by a couple of politicians who championed their cause as hard as they could.

Both major parties fell over themselves agreeing that something needed to be done. Committees were formed and hearings held around the country. Commitments were made, only to be weakened, diluted and finally broken altogether. What was offered up in the end was little more than a shadow of the original intent, and even that looks unlikely to come into effect.

And the poker machine industry? They howled and campaigned and agitated, then went very quiet. And now almost everyone has forgotten about them, and moved on to the next story.

That’s the “Gambling Action Response” script at work. It goes like this:

Now the hot gambling topic is sports betting advertising. It’s everywhere, and the public is (for the most part) sick of it. Much of the outrage is directed at Tom Waterhouse but he’s merely the most aggressive, most recognisable face of an industry that is buying advertising space at a rate never seen before. TV. Radio. Newspapers. Trains. Trams. Billboards. Football jerseys. Sporting stadiums. Scoreboards. Train stations. Sporting associations. It’s a relentless onslaught with no end in sight.

The public backlash has been strong and savage, and has not gone unnoticed. All sides of politics have expressed their dismay at the state of affairs and have promised action. Sadly, that promise of action has dwindled to a token attack on the promotion of “live odds”, and has mostly ignored everything else. The Government and the Opposition have both made a lot of noise about banning live odds, and the industry Code of Practice is also being modified to reflect this… but the rest of the sports betting advertising deluge, more than 90{17ac88c265afb328fa89088ab635a2a63864fdefdd7caa0964376053e8ea14b3} of the advertising in fact, will be unaffected.

Not every politician is playing this game. Greens Senator Richard Di Natale has a bill before the Senate proposing a ban on all gambling ads before 9pm, and a blanket ban on the promotion of live odds. Labor MP Stephen Jones will soon put a motion before caucus proposing a similar bill which he hopes will get formal government backing. Both men have been publicly praised for their endeavours… but Di Natale’s bill drew criticism and condemnation in the Senate, with Liberal and Labor Senators joining forces to oppose it (see details below). It will be another month before it is discussed again but the prospects are bleak.

As for Jones, it is unlikely that caucus will support his proposal, given that Communications Minister Stephen Conroy reportedly drafted the guidelines for the industry Code of Practice updates, to allow bookmakers to keep advertising live odds in sports broadcasts.

Once again, the “Gambling Action Response” script has been brought into play. What started out as a real, effective response to an uncontrolled surge in advertising is petering out to a limp, ineffective token effort which will ultimately achieve nothing.

Of course we should be legislating to restrict the promotion of live odds, especially during sporting broadcasts. But live odds are merely the tip of the sports betting advertising iceberg; the bulk of the problem remains untouched. The sports loving public (to continue the iceberg analogy) is stuck on the Titanic. And the government is cutting loose the lifeboats.

Are you sick of sports betting ads? Hate the sight of Tom Waterhouse’s grinning face? Find it impossible to hear “Those Magic Moments” without thinking of those suckers at the TAB?

Well, get used to it. If the attitudes of our politicians are any indication, things won’t be changing for a long, long time… if at all.

Last week, on Wednesday May 15, Greens Senator Richard Di Natale introduced a bill to the Senate. It called for amendments to the broadcasting act, banning the promotion of live odds, and all sports betting advertising before 9pm. I wrote about it here, and I think it’s a brilliant idea.

The bill was debated on Thursday 16 May; in a rare display of bi-partisanship, Labor and Liberal Senators were united in opposing the proposed amendments.

Senator Gary Humphries dismissed the bill by saying “It seems to be the case with the Australian Greens that there is no social problem too big or too small that is not capable of being remedied or cured with a healthy dose of regulation.”

Senator Chris Back, a member of the senate committee on gambling reform, said “We are not going to wipe out this risk to children by totally banning—certainly until nine o’clock at night—the advertising of sports betting services on television and radio.”

Senator Back went on to speak of his own experiences: “I spent a good deal of my early life in the goldfields area of WA where two-up was a tradition… and there has not been an epidemic of gambling as a result of children growing up in families where their parents may have tossed pennies.”

Senator Ursula Stephens made the leap to banning gambling altogether, saying “Do we seek to legislate for good behaviour? Do we seek to regulate the industry? Do we seek to ban gambling, driving it underground and back to the good old days of SP bookmakers? Technology will beat us every time if that is the approach we take.”

Senator Mark Furner stated that “the government’s preference… is for action to be taken through a co-regulatory framework for broadcasting regulation.” Mind you, now that Stephen Conroy’s involvement in the Free TV code of practice amendments has come to light, you have to wonder just how “co-regulatory” this is.

Senator Furner seemed more interested in talking about State of Origin than sports betting… which is ironic in its own special way.

And finally, Senator Alex Gallacher made the statement of the day.

“The argument is that there is a barrage of ads, disturbing evidence that kids can identify sports betting agencies and that the consciousness of children is being altered or informed. Well, that is just a very successful advertising campaign. That happens with breakfast cereals and with Coca-Cola, and it happens with everything. So I do not think you can say that sports betting is the cause of their altered consciousness; it is advertising that does it.”

If this is the prevailing attitude in Canberra… then it’s hard to see how this situation can ever change.

And if Labor Senators are united in their opposition to a Greens bill seeking to restrict gambling ads until after 9pm, then it will be interesting to see what they make of a similar proposal from within their own ranks. Stephen Jones will be asking caucus to back his bill banning gambling ads from PG timeslots; I’m waiting with anticipation to see what will happen next.