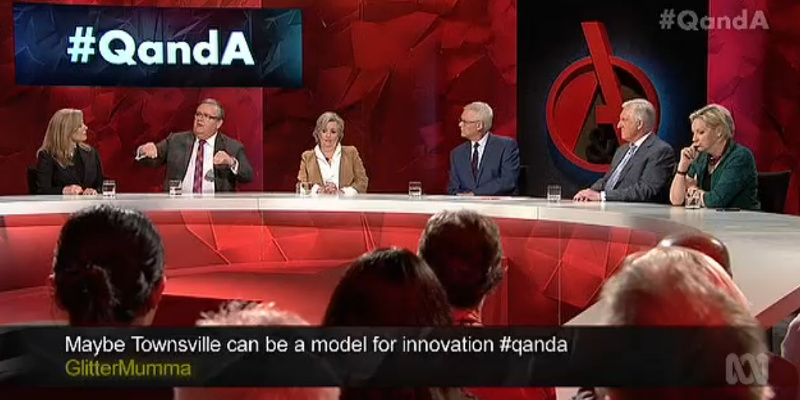 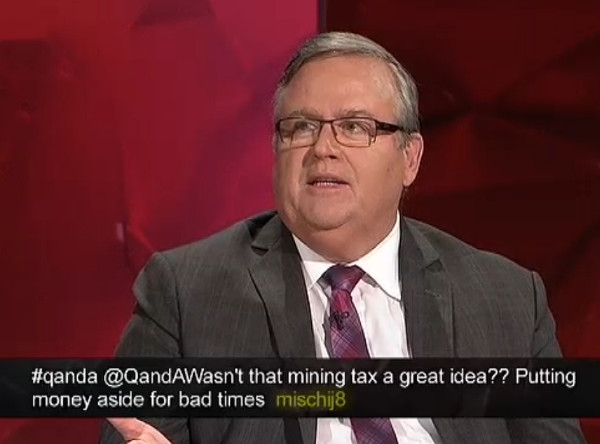 Ewen Jones is the Liberal Party Federal MP from the Townsville based north Queensland electorate of Herbert. He stated on the ABC QandA program on Monday night, “We have just had the Carmichael mine approved and I think that is a good thing for us.”

Both the Liberal National Party Federal Government and the Labor Queensland State Government have approved for development the huge Adani Carmichael coal mine in the Galilee basin in Queensland. But the coal mine is widely seen as a major climate carbon bomb that would make achieving the under 2 Degree C temperature target adopted in Paris as impossible.

At current coal prices and with the coal export market to India and China tanking, development of the mine is seen as simply un-economic in current circumstances without massive government subsidies. And that is exactly what Liberal MP Ewen Jones proposed on ABC QandA program on Monday night.

“The two things you need to develop the north of Australia and Queensland is energy and water. The one thing we can’t do in Queensland is to develop our industrial base because the cost of power is just so huge. So the Carmichael mine is a big mine and will need some kind of power generation. If through using Direct Action and the Clean Energy Finance Corporation and private money we can develop a power plant or power station of 1.2GW and make it a super-efficient or ultra-efficient, or ultra-critical power plant. We can then bring the $5 billion concessional loan facility on developing the north of Australia that can build the poles and wires that will be a saleable asset to bring that power to the national energy market. That will be the catylitic event to open up the renewable energy precinct throughout the Kennedy electorate…”

Ewen Jones support for the Carmichael coal mine and a new coal plant comes fast on the heals of reports that the Great Barrier reef has experienced it’s worst coral bleaching event from climate change. Many of Ewen Jones constituents in Townsville are employed in the tourism industry which will suffer directly from reduced tourism resulting from the destruction of the reef. Adding a new mine and coal power station is like a fire fighter pouring petrol on a large conflagration.

The Carmichael coal mine is a major climate carbon bomb. Jones ignores that any new coal plants, including the latest ultra-efficient and ultra-critical plants, would have us commit to dangerous levels of climate change. A report out titled Boom and Bust 2016 Tracking the Global Coal plant pipeline (PDF) details that “Even with no further building of coal plants, emissions from current coal plants will still be 150 percent higher than what is consistent with scenarios limiting warming to 2°C—meaning that most operating and new coal-fired plants will have to be phased out well before the end of their planned lifetime.”

The report demolishes the claim that the latest more efficient coal plants would resolve the problem, “even adding so-called efficient plants is counterproductive because it locks in large, long-lived carbon emitters, interfering with the need to fully decarbonize the power sector by 2040 in order to limit warming to 2°C.”

As to opening up renewable energy resources, there is already a great opportunity to support developing a 1,300MW capacity hydrid solar and wind power station, which I reported on in July 2015: Battle of coal vs renewables in Northern Queensland. Maybe we should also be investigating development of Export solar not coal, a 21st century Australian infrastructure project

.@EwenJonesMP: What is the long term vision to regenerate industry & employment in Nth Qld? #QandA https://t.co/2E9wWnuDY6

Former Liberal Opposition leader John Hewson, currently an Economics Professor at the Australian National University, responded on the same program immediately after: “I think the Adani Carmichael coal mine is a massive mistake for this country. From the point of view of climate change the numbers state that about 75 per cent of known coal reserves today can never be mined if we are to meet net zero emissions by 2050. To comtemplate openning a large new mine simply for the goal of exporting that coal to India bogels my mind.”

Hewson hit the nail on the head with regard to the Adani Carmichael mine and received huge applause from the studio audience. He has shown there are more rational conservative voices on climate change. Unfortunately most of them appear to be not in the parliamentary party.

His statement roughly concurrs with the economic and scientific review of coal resources conducted by McGlade and Ekins (2015) in the prestiguous journal Nature: The geographical distribution of fossil fuels unused when limiting global warming to 2 °C.

This paper says that 95 per cent of Australian coal, and 88 per cent of global coal, needs to remain in the ground, unburnt, if Carbon Capture and Storage is unavailable. See my January 2015 article: 88 percent of Global Fossil Fuel reserves need to remain unburned – Implications for Queensland

John Hewson went on to articulate that biomass power generation as a by-product of the sugar cane industry is a valuable renewable energy resource. The Mackay Sugar cogeneration plant, opened in March 2013, was developed with finance partially from Australia’s carbon pricing scheme which the Abbott Government abolished in July 2014.

As a double dissolution election has been confirmed as likely by Prime Minister Malcolm Turnbull for July 2nd, it will be interesting to see whether Ewen Jones retains his seat of Herbert in parliament. He is defending a margin of 2.2 per cent from the Labor Party. (See Tallyroom – Herbert – Australia 2013)