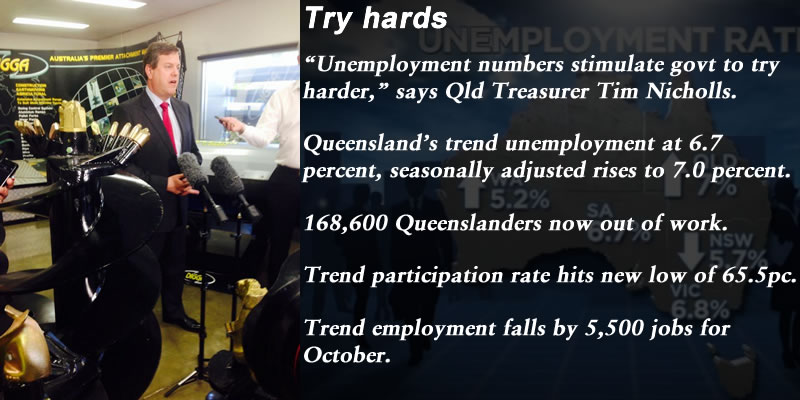 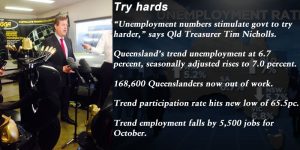 Ten News Qld: 35,800 more people are unemployed under the LNP.

Queensland’s trend unemployment remained at 6.7 percent for October with 3,800 full-time jobs and 1,700 part time jobs disappearing for a total loss of 5,500 jobs. The jobless rate for September was also revised upward by Treasury from 6.4pc to 6.7pc. A total of 168,600 people are now unemployed in Queensland, up from 137,700 in March of 2012 when the LNP took office.

In seasonally adjusted terms, unemployment rose from 6.3pc to 7.0pc. September’s data was also revised to 6.3pc after no data had been supplied from Treasury.

A flummoxed Queensland Treasurer Tim Nicholls struggled to explain Queensland’s deteriorating jobless figures but assured the media that the ‘unemployment numbers stimulate govt to try harder’ and the plan to lease assets after the next election would improve the numbers.

“We also know that Queensland’s economy is expected to grow at six per cent next year, which means thousands of new jobs and new income for Queenslanders,” he said. 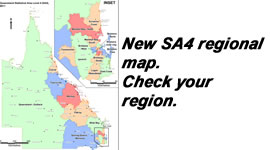 “The resources sector has taken a hit. The world coal price has been pushed down,” he said.

In 2012, the LNP pledged to deliver 4pc unemployment within six years of taking office but in a speech in February of 2014 to the CEDA economic and political overview, Nicholls changed this to a “stretch target”.

Premier Campbell Newman was his usual upbeat self, promising ten thousand jobs from a new coal mine next year.

“The Adani Galilee coal project will see, will see ten thousand jobs being created in Queensland,” he said, once again placing Queensland’s future in the hopes of the resources sector.

Opposition Treasurer Curtis Pitt revealed that 35,800 (seasonally adjusted) more people were now unemployed than when the LNP came to power.

“The worst unemployment rate anywhere in Australia. It is the worst rate since 2003 whether it’s on seasonally adjusted or on trend terms,” he said.

The Queensland Council of of Unions has vowed to campaign in government MP’s electorates using a report from the “Small Area Labour Market” to break down unemployment to electorate.

“Alarm bells should be ringing in places like Bundaberg, Townsville and Stanthorpe. Privatising assets is going to cut even more jobs,” he said.

The to further woes for Queensland, Brisbane shipbuilding company Aluminium Boats Australia announced it would be cutting 160 jobs in the wake of a fire at its’ facilities which destroyed the navy vessel HMAS Bundaberg earlier in the year.

All regional data comes from ‘Regional labour force’ from Queensland Treasury and Trade.

Seasonally adjusted there were 11,800 FTE jobs for October but a loss of 20,600 PTE for a net loss of 8,800 jobs. (There was no data supplied for September job creation). 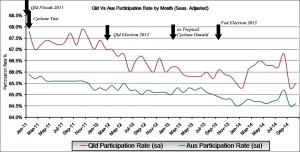 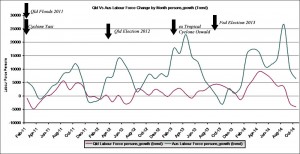 In terms of trend Labour force Australia rose by 6,400 persons but Queensland fell by 4,000 persons. 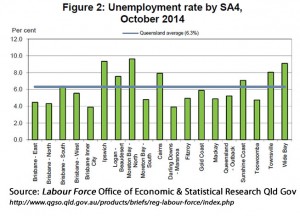 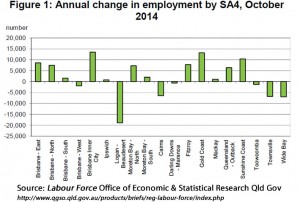