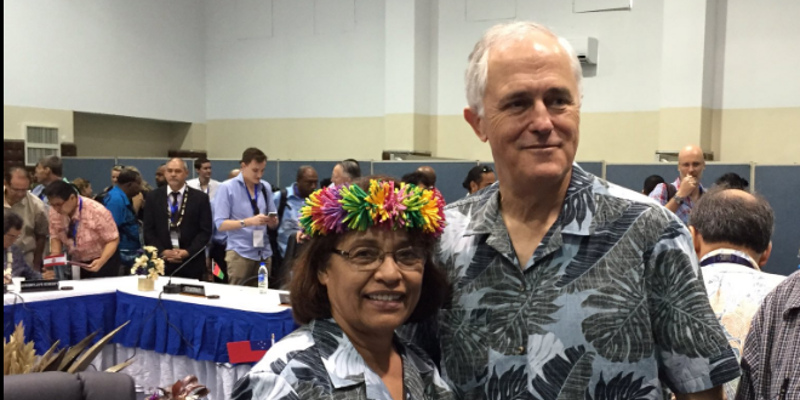 Australia’s Prime Minister Malcolm Turnbull attended the Pacific Leaders’ meeting forum, and announced a small increase in climate related aid for the region. But this comes after the Abbott Government slashed Australia’s foreign aid budget to extremely low levels in 2014.

Related: Pacific pariah: how Australia’s love of coal has left it out in the diplomatic cold | Pacific Island nations lead in ratification of Paris Agreement on climate change

Turnbull outlined a new additional Australian support package to manage climate change and improve resilience in the Pacific. Here is his statement:

“Over the next four years we’ll provide $300 million to Pacific Island countries including $75 million for disaster preparedness. This is an additional $80 million on the current levels. These investments will be based on Pacific National priorities. We’ll engage closely with you on what is most critical now to your countries and will be supported by our overall ODA programs that are increasingly climate-smart. We will also continue to work to secure a substantial share of Green Climate Fund resources for the Pacific, Australia as you know has committed $200 million to the Green Climate Fund over four years and co-chairs the Green Climate Fund board in 2016.” said Turnbull.

Oxfam climate change adviser Dr Simon Bradshaw said in a statement the Prime Minister’s announcement was an encouraging sign for improving cooperation with its island neighbours, but fell well short of what is required for Australia’s fair share.

“But it’s clear that Australia can do far more to increase the scale and accessibility of funding for the region and must substantially increase its pollution reduction targets,” Dr Bradshaw said. “Australia’s current targets are woefully inadequate and risk a future of increasing hardship for the Pacific.” 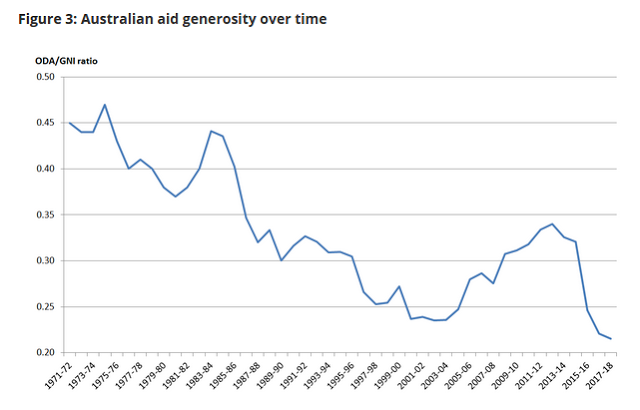 On Saturday at a doorstop interview Turnbull was asked if other parties at the forum had argued that Australia should make deeper greenhouse gas emissions.

Here is Mr Turnbull’s response which effectively did not answer the question and avoided debating what Australia’s ‘fair share’ climate targets and emissions reduction goals should be.

“There is no doubt the world needs to significantly reduce its global emissions. The good thing for now, is that at least we have a global agreement. The mitigation – if you think about the climate challenge in two parts, there are many facets to it but let’s look at two. In terms of reducing greenhouse gas emissions, everyone has to play their part and that has to be done globally, it has to be a global effort. The good thing is we do have a global agreement. Australia has a commitment, as you know, which we are sticking to, which we’ll meet. I imagine those commitments will be increased over time. If they are, as part of the global community, we will meet them. So that’s one side.”

On the other side, the adaptation and resilience is very much a local issue. You’ve got to be able to make sure that a particular island, a particular location, a particular city is protected against the consequences of more storms, higher sea levels and higher temperatures and so forth.” Turnbull concluded.

The global agreement will not, by itself, reduce emissions. It is clear Australia is not playing it’s part as assessed by independent analysis. Current country climate plans have the world heading for 2.7 to 3.5C by the end of the century. Australia’s climate targets as part of it’s contributed INDC plan are rated by Climate Tracker as “inadequate” and more in line with 3-4 degrees C by 2100. Our commitments are far below what our independently assessed fair share is.

“All other industrial countries, except Canada and New Zealand, have proposed 2025 or 2030 goals significantly below 1990 levels. The “inadequate” rating indicates that Australia’s commitment is not in line with most interpretations of a “fair” approach to reach a 2°C pathway: if most other countries followed the Australian approach, global warming would exceed 3–4°C.” says the Climate Tracker assessment.

This graph, published by Professors Hamilton and Karoly in the Minority report of the Climate Change Authority, shows Australia’s present 26-28 percent by 2030 target, and the CCA’s recommended ‘fair share’ target in their first report of between 40 and 60 percent emissions reduction by 2030. 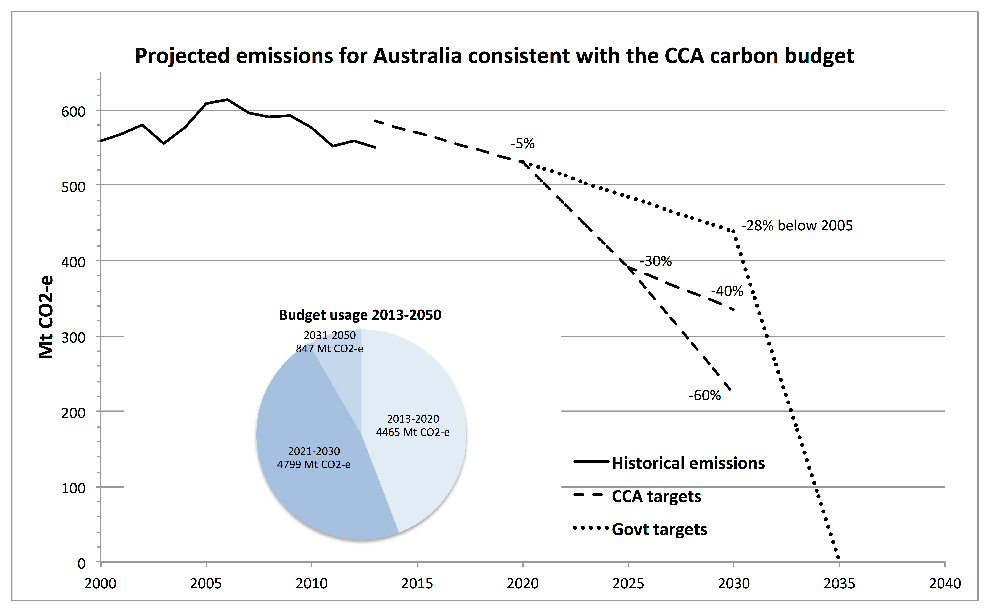 “The basis of our disagreement with the majority report is its failure to recognise the importance of the constraint put on all future emission reduction targets and policies by Australia’s carbon budget. The final report of the Special Review should, but does not, address the relationship between its recommendations, the global carbon budget consistent with the Paris Agreement, and Australia’s carbon budget consistent with a fair and equitable national contribution to the global budget.” say Karoly and Hamilton.

The authors go on to be highly critical of the Government’s climate targets and the CCA majority report. When the Prime Minister and Environment Minister say our targets are ambituous, this is a patently false statement.

Australia remains silent on Copenhagen Accord increased targets for 2020

Of course, if Malcolm Turnbull wants to talk about meeting Australia’s commitments, lets look at the formal commitment Australia made through Prime Minister Rudd with the Copenhagen Accord in 2009 and confirmed at Cancun in 2010. This was for a range of emissions reduction from 5 per cent to 25 per cent conditional on certain circumstances, with the lower end being unconditional.

Our commitment range for the Copenhagen Accord has never been rescinded and remains on the table as part of Australia’s climate commitment to other nations in the UNFCCC.

By 2014 the Climate Change Authority had assessed many of the conditions had been met for increasing our 2020 target to 19 per cent reduction by 2020. Their recommendation was met with silence. Since then COP21 has ocurred bringing about the Paris Agreement and crossing another major condition for our 2020 targets.

Yet there has been silence by both the ALP and Liberals during the election on this commitment made under the Copenhagen Accord. The Government and Malcolm Turnbull remain silent on increasing Australia’s 2020 target from the very low 5 percent, abrogating our obligations to raise our targets once the conditions have been met.

It is clear Turnbull is aware of the urgency of climate action from his days as Opposition leader when he negotiated with Kevin Rudd for the CPRS scheme. See some of his comments in 2009 and 2010 when he was outspoken on climate action and climate leadership. But it was clear in February 2015 he had sold his soul to the climate denialist right wing of the Liberal party for a chance to be Prime Minister and depose Tony Abbott. At COP21 leaders meeting Turnbull was all style, little substance.

The message from the Australian government was much more controlled in 2016 in comparison to the gaffe by Immigration Minister Peter Dutton who made a joke about sea level rise innundating Pacific nations after attending the Pacific Leaders meeting in 2015. There were also concerns raised about Dutton’s sincerety after he apologised for the insult.

Australia has commenced the ratification process for the Paris Agreement with the tabling of the agreement in the Australian parliament last week, just before the G20 meeting and ratification by the United States and China. The process of ratification for Australia is likely to be completed before the end of the year.