What’s it all about, the Coalition no show for disability, no to MP to care for sick baby? 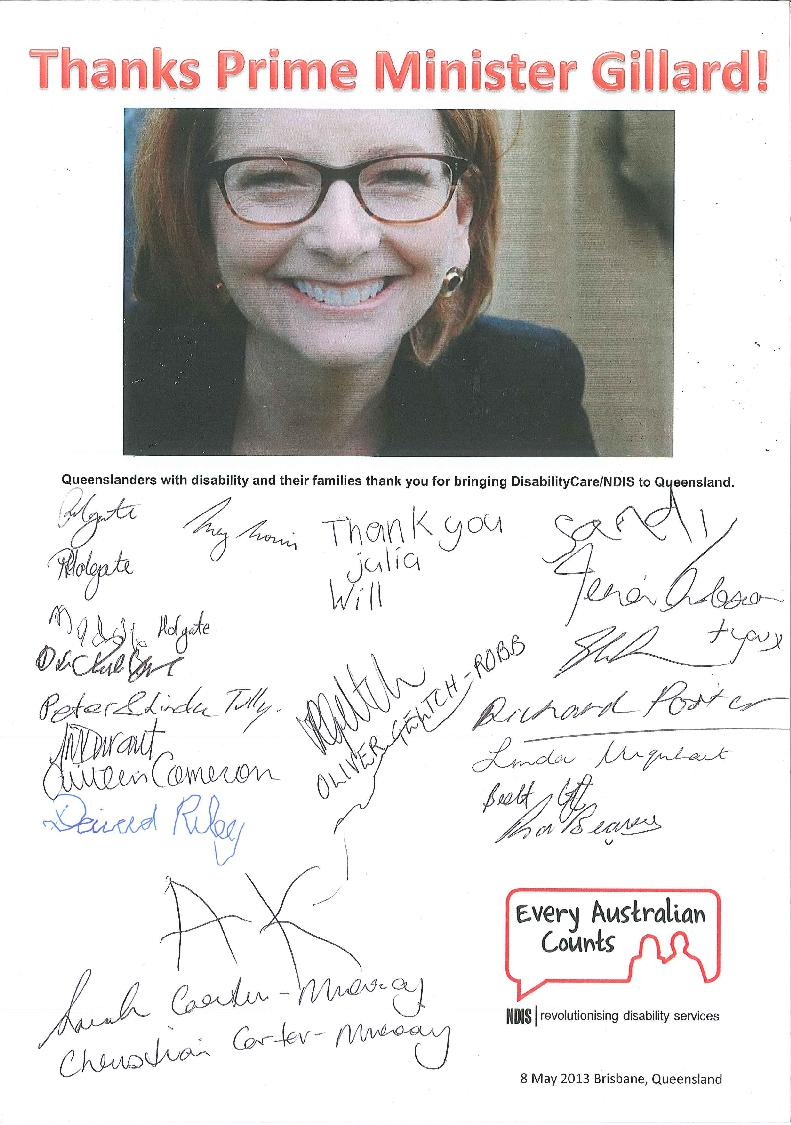 If you missed it, see last night’s awe inspiring rant by Mr Richard Chirgwin about the Coalition not bothering to turn up for the introduction of the DisabilityCare Bill. I had hoped that our media would report this lack of respect this morning, but no.

Did you know that Mr Abbott’s reply speech to the budget is more important than a mother taking time off work to care for her sick baby?  It is. The Coalition did not grant ALP MP Michelle Rowland ‘a pair’ so she could fly home to care for 14 month old baby: Opposition blocks bid to be with sick baby.

So let’s re-cap.  In one 24 hour period, our Coalition Opposition and soon to be our Rulers as the Australian media keep telling me (personally I would prefer to actually vote first) have insulted every disabled person in this country by not bothering to attend the Bill’s introduction.  I am sure the Coalition will backtrack on Ms Rowland’s dilemma, and there will be excuses of “Not being aware of the seriousness of the pairing request blah blah.

What the Coalition cannot backtrack on is their non-attendance in Parliament yesterday.  Yes a budget is important, but it happens every year. This historic Bill is a one-off.  It should have been a day of celebration for the disabled, their families and their friends, and a celebration of our nation shared by all!

I could give many more examples.  The very least the Coalition could have done was attend this sitting to show that they supported these people.

It has been suggested this morning that the ‘No-Show’ is not really that big a deal, as  it has already been made clear that they would support it. I am sorry, but I disagree.  Our MP’s are employed to represent US, the Australian people, in the electorates where they were priveledged enough to receive a vote of confidence from us that they would represent their interests to the best of their ability.  Unless all these members that did not bother turning up for Parliament do not have any disabled in their electorates, I fail to see how that is representing your electorate?

Mr Abbott will have nothing to offer in his Budget reply except to say ‘This is a bad Government, ‘This Government can’t be trusted’ blah blah.  You can guarantee that all of the Coalition have bums on seats to cheer Mr Abbott on.

The media are already setting the stage for Mr Abbott’s wonderful reply speech, as it will be – just ask them.  It has been the lead story on all the TV stations.  Not one whimper about the total lack of respect afforded the disabled community yesterday, barely a mention of the pairing rejection. though anyone want to take odds when they invariably backflip on that there will be plenty of airtime given to it.  The producers of these News shows that decided the lack of support for this bill and blatant disrespect shown to the Disabled by the Coalition was NOT News should be thoroughly ashamed of themselves.

If this is the state of our Nation, where our elected members of Parliament are allowed to behave in this manner and the media (except for Fairfax photographer Andrew Meares) just shrug off as a political ‘tactic’ then it is not a Nation I want to be part of.  I have discussed on this blog in the past my feelings about the lack of empathy that Mr Abbott has shown in the past and the attitude displayed in the past 24 hours has not changed my opinion.

The disabled I have spoken to were hurt and disappointed when they have discovered the no-show. Worse, they are now worried that by not bothering to turn up, the Coalition in fact plan to wind back the NDIS as they don’t really support it.  This is not the sort of worry that these people need, they have enough worry in their lives as it is.  Politics and political gamesmanship should NEVER be more important than PEOPLE.  No segment of our society should ever be disrespected the way they were yesterday in Parliament.  No mother should ever have to stay away from their sick child to satisfy a political game.

It is time for the media to scrutinise Mr Abbott.  It is time for the media to show the sheer ambition and lengths that Mr Abbott will go to to gain power in this country.  It is time for the media to let the Australian public know exactly how much Mr Abbott values them, as obviously his political ambition is more important than we, the public, are.  After working in very large companies, I fully comprehend that the ‘tone’ & ‘attitude’ of a company filters from that of the CEO at the top.  Therefore this attitude can only be coming from Mr Abbott. Having said that, it does not excuse the fact that the other Coalition members blithely followed instructions to not attend.  You should all be ashamed of yourselves!

PS. If you would like to see Kiera’s wonderful graphic, here it is:

IMPORTANT:  11.00am: I guess I am psychic. It’s all over TV how generous the Opposition is in allowing Ms Michelle Rowland to be paired. Mr Pyne waffled with rubbish saying “Did not know Ms Rowland’s child was sick…”  Sadly it seems that a copy of the letter somehow attained by Mr Chris Murphy (dated 15 May) doesn’t quite gel with Mr Pyne’s PR line.  Just click on the letter graphic to the right here to see in full.