A baptism of sea and sky – The Qld Weekly #qldpol: @Qldaah 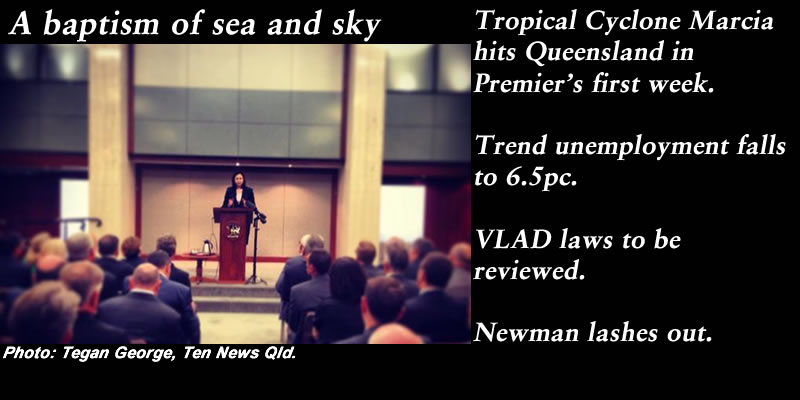 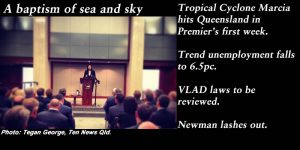 A busy first week for new Queensland Premier Annastacia Palaszczuk. She saw the swearing in of her 14 member cabinet which included 8 women, the highest proportion in Queensland’s political history. She met with both business and union leaders in an effort to encourage the two groups to work together to reduce Queensland’s high trend unemployment rate of 6.5 percent. (For more statistical analysis of the jobless rate, see our No Fibs coverage, “January 2015 Qld trend unemployment falls to 6.5pc”.)

A quick tour of one of the hospitals was her last engagement before Tropical Cyclone Marcia took hold and she found herself suddenly transformed into former Premier Anna Bligh.

Liberal National Party Opposition Leader Lawrence Springborg and team spent the first week in opposition complaining and warning against the reduced government ministry size from nineteen to fourteen. They argued that ministers would not be able to handle multiple portfolios such as Kate Jones, who has been sworn in as Minister for Education, Tourism, Major Events and Small Business and the Commonwealth Games. However, due to parliamentary rules, the LNP would only be paid for a 14 strong shadow cabinet to match. According to the “Legislative assembly of Queensland – Members’ remuneration handbook”, the salary for “Opposition Spokesperson” is an extra $57,578 on top of the standard MP pay of $148,848. If they kept their nineteen member team from the Newman Government, it would mean five members would miss out on the additional salary. As the cyclone raged on the Queensland coast, they eventually decided to supply fourteen paid shadow ministers and five volunteers, perhaps hopeful of a failure in the Palaszczuk administration that would see additional ministers needing to be sworn in.

Premier @AnnastaciaMP "It is horrific what these people have gone through.. We now need the Army's help." @tennewsqld pic.twitter.com/U74kqiUocf

Despite all the rain, drought continues

“@organiclambman: Dam has just gone dry. Moved cattle to water. If only the cyclone came to the West. #drought pic.twitter.com/skw55RyfC9”

ABC News 24: 700 Australian Defence personnel will be dispatched to aid in clean-up from TC Marcia.

Lawrence Springborg took advantage of the wet weather to announce his shadow cabinet. As the Palaszczuk ministry will only contain 14 members, the opposition can only be paid for 14 “Opposition Spokespersons”.

A happy ending! Vicki & Faye have been rescued! They were in tears. Before chugging down a glass of white @tennewsqld pic.twitter.com/IESD1i1Yw8

Newman blames everyone but himself

Victoria may need to compensate QIC

Women in power? What next?

No monkeys for Pirates of the Caribbean 5

Union leaders on their way into Parliament House for meeting with Premier @AnnastaciaMP #qldpol pic.twitter.com/VsVEjpeMf0

Who is more experienced? 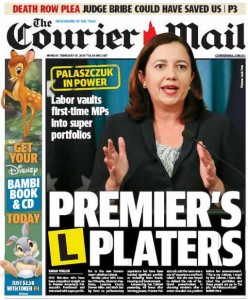 Up to old tricks, The Courier Mail began the first working day of the Palaszczuk administration by accusing it of having a lack of ministerial experience and plasting “Premier’s L Platers” on the front page. However, as Noely Neate quickly pointed out, Labor has more executive experience in 2015 than the LNP did when it took government in 2012; Palaszczuk’s 145 months compared with Newman’s 4. Data was supplied to My Sunshine Coast online news; “ALP Executive/Ministerial experience upon taking Office 2015”.

7 News Brisbane: Anzac Square will be refurbished in time for the centenary of the Gallipoli landing.