Australia and coal at Bonn Climate conference #COP23 by @takvera 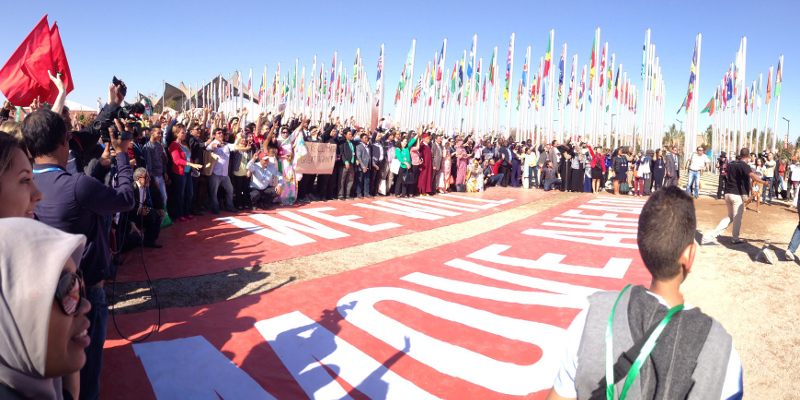 Determination to move ahead at COP22

On an international level, the politics around climate action have moved substantially since 2015 and the signing of the Paris Agreement. I was at the UN climate change conference in Paris – COP21 – and it was a significant moment.

But the politics in Australia is still heavily mired in the past, and the vested interests that make up our energy and mining sector. The Federal climate and energy policy of the Abbott/Turnbull government, including the National Energy Guarantee (NEG) is all built around prolonging coal use, impeding the growth of renewables and the energy transition, and doing as little as possible to meet Australia’s already ‘insufficient’ climate targets, let alone more ambituous targets needed for our fair share of global action.

It should come as no surprise that Australia’s emissions are rising not falling, according to a Briefing note by the Australia Institute.

I attended the following UN Climate Conference in 2016 in Marrakech – COP22 – which occurred at the same time as the US presidential election where Donald Trump rose to power. There was steely determination during and at the end of that conference to proceed with implementing the Paris Agreement.

The climate science continues to emphasise the massive impacts already occurring on populations. From the succession of hurricanes that devastated the US and Caribbean nations this year, to the extensive heatwave named ‘Lucifer’ across Europe this past summer.

The United Nations Environment Program have just published their Emissions Gap Report for 2017 which shows a substantial gap between action and targets.

The report highlights that the Paris pledges are only a third of what is needed to avoid worst impacts of climate change. But the good news is that adopting new technologies in key sectors, at investment of under US$100/tonne, could reduce emissions by up to 36 gigatonnes per year by 2030, more than sufficient to bridge the gap. Also the Kigali Amendment to Montreal Protocol, action on short-lived climate pollutants, and increased pre-2020 G20 ambition on Cancun pledges can also help minimize climate impacts.

“One year after the Paris Agreement entered into force, we still find ourselves in a situation where we are not doing nearly enough to save hundreds of millions of people from a miserable future,” said Erik Solheim, head of UN Environment in a media statement.

“This is unacceptable. If we invest in the right technologies, ensuring that the private sector is involved, we can still meet the promise we made to our children to protect their future. But we have to get on the case now.”

Significantly, the report also includes a section on a detailed assessment of global developments in the coal sector, including examining the options and barriers for a gradual coal phase-out.

So in a week’s time the latest UN climate conference – COP23 – gets under way in Bonn, Germany. The presidency of these conferences, and also usually the location, is rotated around the different regions of the world. This year Fiji has the presidency but the logistics of hosting a major conference prevented Fiji from holding the conference in the Pacific.

Holding the Presidency, Fiji and other Pacific nations will have some power to place issues on the agenda and to steer aspects of the conference.

One of the important issues will be on Loss and Damage. “Loss and damage” is characterised as the worst impacts of climate change beyond what it is possible to adapt to. The Warsaw International Mechanism (WIM) was set up in 2013 to address loss and damage, but so far has been essentially just framing the conversation on this topic.

Pacific island nations are already feeling the effects of rising sea levels and enhanced impacts of tropical cyclones. Civil Society and Pacific Nations will be pushing for strengthened results on Loss and Damage out of the Bonn conference. In particular Loss and Damage Finance needs to be mobilized.

The Paris Agreement was a framework agreement, so much of the Marrakech and Bonn meetings are tied up with formulating the details of each section, the so called rulebook. This is important work to ensure transparency and accountability is enshrined within the processes of the Agreement. The aim is to complete the rulebook for adoption at the COP conference in Poland in 2018.

Next year is also crucial as all countries need to review their national climate plans. Working out the process for this facilitative dialogue will be important at Bonn.

Through the year and at COP24 there will be a “facilitative talanoa dialogue” between countries. This is where each country has an opportunity to openly question any other country about their climate action plans.

‘Talanoa’ is a Pacific word meaning story telling. According to the Fiji Times in 2008 Dr Winston Halapua, a leading sociologist, said talanoa was “engaging in dialogue with, or telling stories to each other absent concealment of the inner feelings and experiences that resonate in our hearts and minds.”

The Paris Agreement has proved its resilience following the Trump administration announcing its intention to withdraw the US from the Agreement in June. But we also know that current commitments are far from sufficient for meeting the “well below 2 degrees and strive for 1.5 degrees” target. It is clear all countries need to step up their ambition and climate plans.

Canada and the UK recently announced an alliance to push for the phaseout of coal. While this is not part of the official negotiations, it will form part of the more informal Action Agenda of the Bonn COP23.

It is in stark contrast to Australia’s position of supporting the Adani Carmichael coal mine, the largest coal mine in the southern hemisphere, and the first from the Galilee Basin. Australia’s climate negotiators will be fighting a rear guard battle to keep coal off the official agenda, but it will be in everyone’s minds.

In recent UN conferences Australia has often received Fossil of the Day awards associated with support for the fossil fuel sector and for hindering progress in negotiations. I was present in Paris when Foreign Minister Julie Bishop gave an endorsement of coal and received a Fossil award.

At Marrakech, Australia’s climate policies were under the spotlight at COP22. Julie Bishop also signed the Second Because the Ocean Declaration, and Australia received two Fossil of the Day awards. As an Australian present I had the opportunity to accept an award for Australia.

Most Fossil awards are given for activities at the conference blocking or hindering the negotiations, but countries doing a particularly bad job at implementing the agreement can also be nominated for a Fossil award by CAN members. The reasons for nominating a country must be verifiable and have taken place shortly before the nomination.

I shall also keep an eye on Australia’s negotiating positions, as much as I am able. I am one of a small number of accredited Climate Action Network Australia delegates attending this conference.

Kermit might need to go on a diet in Germany as new research has shown that the insect population in Germany has plummeted over recent decades. It is an ominous sign of a mass extinction event already under way largely caused by human related factors. For more on the implications read conservation biologist Professor Cory Bradshaw’s blog: You know you’re screwed when the insects disappear.

Note: John Englart has been writing on climate change science, climate policy, and climate protest events since 2004. He is currently Convenor of Climate Action Moreland in Melbourne’s northern suburbs. He attended as an NGO accredited delegate the UN Climate Change Conferences in Paris in 2015, Marrakech in 2016, and now in Bonn in 2017.