Marrakech: we will move ahead on #climate – @takvera on week 2 of COP22 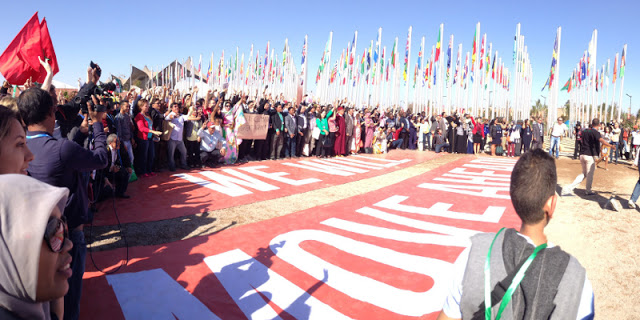 On the last day of the UN climate conference, COP22 in Marrakech, Greenpeace organised a photo shoot outside the entrance to the COP22 conference venue with a huge banner saying: We will move ahead. It was advertised to delegates as the largest photo shoot of the UNFCCC ‘family’. Party delegates and observers, media and members of the secretariat gathered for the photo.

After the emotional rollercoaster ride of the US presidential election and considerable chatter about what a Trump Presidency would mean for climate action, the event was a fitting summary of the resolve of people at the conference. To forge ahead despite a climate denialist being elected President of the USA.

Despite all the differences, Resolve is here at #COP22 on #climateaction #WeWillMoveAhead #Go100RE #1o5C pic.twitter.com/Bma0iyfL0W

While the election affected the mood of the conference, it didn’t impact the will to continue the momentum of the negotiations. In fact, additional sessions were added, a sign the US elections may have had an opposite effect of increasing the determination of negotiatiors.

The Paris Agreement is a Framework agreement, which means that lots of the fine details still need to be formulated, negotiated and agreed to. COP22 started on these details and mandated that the permanent bodies SBSTI and SBI report back with the rulebook in 2018 (COP24). The Paris Agreement also mandated that a facilitative dialog between the parties will take place in 2018. So 2018 is shaping up as the next key year in negotiations, with a progress review in 2017.

The COP Presidency for 2017 will pass to Fiji, but before you get your bathing suits and observer accreditation applications ready for a South Pacific rendezvous, the conference will be held in the German city of Bonn, the headquarters of the UNFCCC secretariat. Fiji is not up to the task of hosting 30,000 conference participants. Will this be a smaller COP?, and be used as an excuse to limit observer organisation representatives? Let us hope not. Observer organisations are important for providing transparency to the UNFCCC process and play a critical role.

In 2018 COP24 will return to Poland, which will make the coal lobby happy. The UN climate conference, COP19, was held in Warsaw, Poland in 2013. Australia did particularly well in the Fossil Awards that year.

The second week in Marrakech started with an open letter from over 400 NGO’s calling for no new fossil fuel production and phased closure of existing production facilities.

The latest report from Climate Analytics titled: Implications of the Paris Agreement for Coal Use in the Power Sector, finds that the temperature targets agreed to in Paris requires a rapid decarbonisation of the global power sector.

“Current coal plans worldwide are inconsistent with the Paris Agreement and point to a large risk that economies and societies are running if they were to implement current plans.”

Emissions from the existing coal fired power stations and those presently under construction will already exceed the emissions budget in line with the Paris Agreement. And if any of the 1082 new (permitted or pre-permitted) coal-fired power plants with combined capacity of around 596GW get built, this will lock in high carbon intensity for 40 years.

“To achieve the Paris Agreement temperature goal, countries will have to implement early retirement of power plants, reduce their utilization rate, and refrain from building new capacity.” argues the report.

Nigerian environmental activist, Nnimmo Bassey, a former chair of Friends of the Earth International who now runs the Health of Mother Earth Foundation, was particularly scathing in a very poetic way. “We thought it was oil. But it was our blood. We denounce the fossil fuel industry. We are here to denounce the COP.” Watch his speech on Youtube.

David Turnbull from Oil Price International was also extremely articulate on the need to stop digging for more fossil fuels. Watch on Youtube.

There is increasing resistance to fossil fuels development in Africa. 100 percent Renewables are Africa’s future, and an action on the second last day of COP highlighted this in a very musical way. “”It’s time to show the power of African resistance to fossil fuels, and our energy for renewable energy at this COP. We need to call on our African leaders to deliver renewables, not fossils. We need to show the world that Africans are rising up to fight for climate justice.” proclaimed the advertising for the event.

Fossil of the Day Awards

From day one I volunteered with the Climate Action Network to do videography and assist with the social media for the Fossil of the Day Awards (Facebook). Something was definitely amiss after 7 days of COP with 3 days without any nominations. Either CAN daily wasn’t getting it’s usual Intel or negotiators were getting their heads down and doing the hard work. I would like to think it was the latter.

Australia won it’s first Fossil award of the COP on Wednesday for Josh Frydenberg using the negotiations to complain about activists campaigning against coal. I got to collect the award in lieu of Josh. The next day, we shared another award as one of the countries expanding fossil fuel activities incongruent with the Paris Agreement targets. See my writeup at Climate Action Moreland.

Here is the citation:

“Our first Fossil of the Day award goes to…Australia for making ugly complaints about dirty baggage. We don’t mean to gossip, but today the Australian Energy and Environment Minister Josh Frydenberg was caught complaining to US Energy Secretary Ernest Moniz about American charities standing in solidarity with Australian communities who are fighting to prevent the construction of the largest ever coal mine down under – Adani’s Carmichael mine. Australia ratified the Paris Agreement last Friday, so lobbying for coal expansion at the United Nations climate negotiations is an ugly, ugly thing to be doing. Shape up, Australia.”

The Fossil awards seemed to end strongly with Russia scoring the Colossal fossil award of the year. The Climate Vulnerable Forum won a Ray of the COP for their leadership and vision on going 100 per cent renewables.

The second week also marked a series of ministerial presentations and events, and substantial protocol and the ministerial decision level meetings of the COP.

I was able to listen live and watch from the overflow Casablanca Plenary of Australian Foreign Minister Julie Bishop delivering Australia’s ministerial statement. Some fine rhetoric. Read the statement attached to this photo. I was also able to catch Ms Bishop at a signing of the Second Because the Ocean event on Monday night. I explain how the rhetoric in her speech is incongruent with Australia’s policies of opening new coal mines to expand coal export and the Paris Agreement.

On the second Tuesday a High-level event on 100 percent Renewable Energy for 1.5°C, co-hosted by the COP Presidency & Climate Vulnerable Forum (CVF). This is the first time that the movement for 100 per cent renewables has attracted such endorsement at a COP. It underscores the important policy and groundwork that the Climate Action Network has been doing.

Marshall Islander poet Kathy Jetnil-Kijiner openned the session, which then included speeches from a variety of leaders and negotiators, followed by a wide range of stakeholders sharing their expertise, perspective and analysis to strengthen ambition towards 100 percent renewables.

Shane Rattenbury was there representing the ACT government and their efforts to reach 100 per cent renewables by 2020.

Barry Parkin from Mars Global told the event that the company realised that “we had to do our part”, along with going 100 percent renewables being just good business. Read my storify: Support at #COP22 for Renewables #Go100RE for #1o5C

The Climate Vulnerable Forum (CVF) increased its membership from 43 to 47 nations and set the agenda for the final day of the COP in a high level meeting announcing they would all update their NDCs as early as possible before 2020, prepare mid-century, long-term low GHG development strategies as early as possible, and strive to meet 100 per cent domestic renewable energy production as rapidly as possible.

These nations are leading by example and set the tone for the ending of the conference. Read my Storify: Climate Vulnerable Forum sets the example of #climateaction for #1o5C

Host country Morocco developed the Marrakech Action Proclamation which was read out and adopted to the full Plenary on Thursday 17 November 2016. The one page statement articulates the urgency of climate change, and the unstoppable global momentum on climate action and sustainable development action by governments, businesses, investors, sub-regional government and cities.

The conference, as usual, went into overtime staying late Friday night and concluding in the early hours of Saturday morning. Staying to watch the final proceedings was beyond my capacity, grappling with a head cold for the last 3 days of the conference. I was happy to go back to my hotel room after I had videoed, uploaded, and posted the last Fossil of the Day Award Ceremony of COP22.

The list of decisions of the decision making bodies COP22/CMP12/CMA1 is available at the UNFCCC site.

So how will this COP be viewed? Luke Kemp at the Conversation argues that Marrakech climate talks produced defiance towards Trump, but little else. I think this assessment is too harsh. COP22 was always going to have a focus on Paris Agreement implementation and the start of developing the rulebook. Progress was slow, but what emerged from the distraction of the US election was more determination to make Paris Agreement a success.

The real crunch time will come will come at the COP in 2018 when the Facilitative dialog between countries needs to occur, and the rulebook needs to be ready. And we also need to see an increase in pre-2020 ambition for any chance of staying well below the 2C temperature target that Paris Agreement stipulates. We have a mear 4 years to reverse the global greenhouse gas emissions trends to stay within our carbon budget. 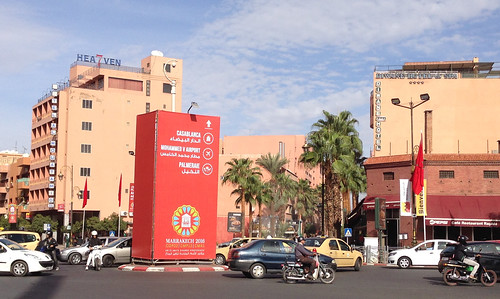