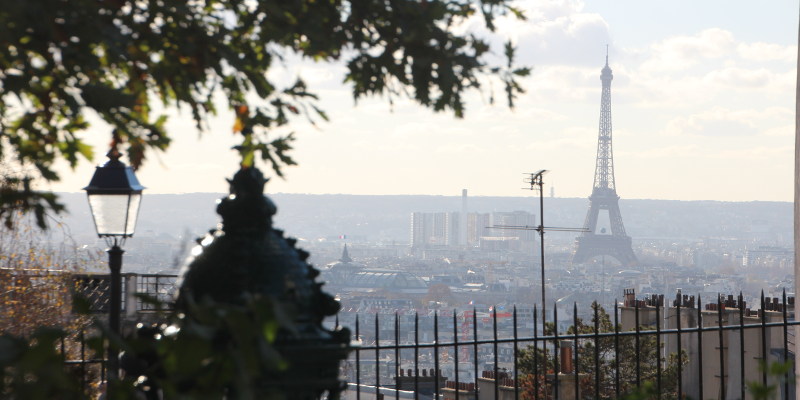 It seems that Australia has flexibility in negotiating for a global climate agreement in Paris. Minister Hunt even expressed that there is some room for Australia to lift it’s targets, after a review, through purchase of carbon credits. But it appears there is no extra funding to the Green Climate Fund on the table.

Australia as a mid-level power carries some influence at sensitive negotiations such as the United Nations Framework Convention on Climate Change (UNFCCC) annual summit, called the Conference of Parties or simply COP. This year in Paris is the 21st year of negotiations, hence COP21.

Tom Arup in The Age has a good summary of the Australian political negotiating position on climate, writing that Australia’s “team now has a negotiating mandate approved by cabinet. It is understood to be flexible and allows Australia to sign up to a strong agreement, including one with lofty language about the long-term ambition of the agreement.”

Earlier this month at the Pre-COP meeting while Environment Minister Greg Hunt received applause for Australia’s perceived more conciliatory stance on climate action, Foreign Minister Julie Bishop was telling a Coalition party room meeting in Canberra that no additional money and no part of the government’s climate policy would change as a result of COP21.

It was Bishop’s understanding that Australia’s primary role at the Paris climate conference is to assist with “rules and transparency”, according to Nine News.

Even though our emissions are projected to keep rising by 2020, Environment Minister Hunt may use the UN conference to announce that Australia has already met our 5 per cent reduction target by 2020. Leonore Taylor explains this in detail at The Guardian how we can meet our very low 5 per cent target with rising emissions. It is all part of using the rules of carbon accounting.

Our ambassador for the Environment Peter Woolcott, who will be one of Australia’s lead diplomatic negotiators, gave a thorough rundown of Australia’s position and the state of negotiations in a speech to the Queensland Global Change Institute. Graham Readfearn reported the speech for The Guardian. It is worthwhile reading in full.

Woolcott argues that three issues are of primary importance. Firstly that all countries commit to mitigation efforts that are nationally determined but also meet minimum-quality criteria for mitigation. Secondly, that accountability and transparency in how states are meeting their commitments is important for tracking purposes for building greater ambition. Thirdly, that a durable process or review and upscaling is put into place to build action over time.

Peter Woolcott argues that the terrorist attacks in Paris will, if anything, increase France’s desire for a strong climate deal out of COP21. The issue in France, however, is that the bans placed on major street protest with the state of emergency has disempowered a major avenue for civil society and public voice on the negotiations, while business lobby groups have not been affected in the same way. Activist groups have vowed to mobilise at the climate summit despite the ban.

Giles Parkinson at RenewEconomy reports “Australia remains open to including an option to tighten the global climate target to a maximum 1.5°C warming above pre-industrial levels, and may also support a long-term goal for the world to be “carbon neutral” by 2050.”

More than 100 countries have joined the call for worldwide support to limit global warming to 1.5 degrees Celsius (See #1o5C campaign www.1o5C.org). As Giles Parkinson discusses, Australia’s official line is that it supports the 2°C target, but there is considerable pressure from the Climate Vulnerable Forum Group and others for the adoption of a 1.5°C target to avoid the risks implicit with the 2 degrees C target that only leaves a 50-50 chance of avoiding the impact of runaway climate change and would inundate or devastate many tropical and small island nations.

The Climate Vulnerable Forum met in the Philippines from 9-11 November and issued the Manila Communique which called for an ambitious, universal, legally-binding, dynamic and durable international agreement at COP21, which enshrines a goal of below 1.5 degrees C, successive 5-year review cycle, scaled up climate mitigation and adaptation finance, and confirmation of a loss and damage mechanism as part of the agreement.

The 1.5 degree C target remains in the text to be negotiated at Paris, with many parties, particularly small island nations and most African states, wanting it to stay there, or even be the principal target.

Is a 1.5 degree target achievable? Scientists say that it is, but barely, and would require rapid escalation of renewables, energy efficiency and programs to cut emissions, as well as research and development into carbon negative technologies and processes.

Kiribati says a moratorium on new coal is important 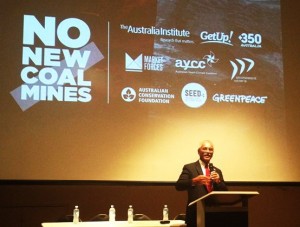 President Anote Tong had a public meeting in Melbourne on his way to Paris, where he urged the Australian Government not to approve any new coal mines or coal mine extensions. This comes after Greg Hunt recent second approval for the Adani Carmichael Coal mine in the Galilee basin. A Recent study by McGlade & Paul Ekins (2015) which I reported on says that over 80 per cent of coal needs to remain in the ground unburnt if we are to limit global warming to acceptable levels.

The Australian Government and the Labor opposition have so far ignored Kiribati’s pleas for no new coal mines or coal mine extensions, according to Tom Arup in the Sydney Morning Herald: Kiribati President’s challenge to Australians: do you care?.

Tong recognised that coal production could not just be shut down overnight, as it was essential to many countries, but that a moratorium on new producing mines should be agreed to. He argued strongly that a decision by countries to open new mines is not moral, that it amounted to eco-terrorism, and was equivalent to mass destruction.

The repercussions of continued coal mining and burning are devastating for his nation with global warming causing rising sea levels. It was simply not possible for his people to move inland to higher ground as there was no inland to move to. His people are already preparing to abandon their nation. As part of this preparation many were studying at a skilled tertiary level so that when they eventually leave, they would be productive, contributing members to whichever society they came to: Australia being a preferred nation.

“I challenge people, leaders in Australia to face the reality. Or let them say ‘I don’t care’ and then go to church next Sunday.” he told the meeting.

He pointed out the huge human costs of climate change, and that it was not about a profit/loss balance sheet in a company statement. Renewable energy is the only long term option he explained.

To his nation and many other Pacific nations Australia is regarded a friend, a “big brother”, that assists the “small brothers” in the Pacific. He reminded the audience that just a few years ago Australia sought the support of the Pacific Nations in order to win a seat on the Security Council, and that support was freely given. Now Pacific nations need Australia’s and the world’s help in addressing climate change.

Turnbull brings a change in emphasis

So there is a change in emphasis with the Turnbull Government, even though our targets, funding and government instruments of climate action haven’t as yet changed.

This stands in stark contrast to the past two conferences where Australia has been seen as more obstructive to the process, than constructive. At COP19 in Warsaw the Abbott Government didn’t even deign to send ministerial representation, while at COP20 in Lima we were represented by Foreign Minister Julie Bishop who was chaperoned by neo-liberalist Trade Minister Andrew Robb.

At Lima, Julie Bishop announced Australia would contribute $200 million to the Green Climate Fund, over the objections of Tony Abbott, from a substantially reduced Foreign Affairs budget. At the same time Andrew Robb was cosying up to Bjorn Lomborg, possibly setting up that $4million sweet deal for a university based Lomborg Conensus Centre.

Australia’s climate targets are widely seen as inadequate according to the science and not comparable in effort on an international level. The Climate Change Authority assessed that our 2020 target of 5 percent emissions reduction on 2000 levels was inadequate and recommended to be increased to 19 per cent by 2020 to place Australia at a comparable international level of effort in the middle of the pack. Our Post-2020 target also comes down at the bottom of the international climate league target worse than the US, and on par with Russia, Japan and New Zealand.

The leadership change in September brought moderate conservative Malcolm Turnbull to the Prime Ministership. Turnbull is aware of the scientific imperative on climate change and was negotiating an emissions trading scheme as Leader of the opposition with the Rudd Government in 2009 when he was deposed by Abbott. But early indications are that Turnbull’s leadership will be a change in emphasis and style, rather than make major changes on climate policy to assuage the climate denialist right wing of the Liberal Party.

At the Bonn talks in June Australia came under intense questioning by other countries on our climate targets, and instruments to realize those targets.

Malcolm Turnbull will be at the leaders meeting on the first day of the conference on November 30, with about 100 other heads of state. Then Environment Minister Greg Hunt will lead the delegation for the first week of negotiations, following by Foreign Minister Julie Bishop for the final week.

The current voluntary commitments contained in the INDC statements, at their best, will reduce warming to 2.7 to 3 degrees. Still not enough to meet the 2 degree guardrail. And even more will need to be done to not surpass 1.5 degrees which a growing number of Island and African states support as a goal. Indeed, it is likely that some island nations such as the Marshall Islands, Maldives and Kiribati will vanish due to rising seas if we continue on the 2 degree path.

Issues such as scaling up climate finance, loss and damage mechanism, the legal nature of an agreement, whether 1.5 degrees is retained as a goal, are all contentious in these negotiations.

Australia will be walking a fine line in these negotiations, but in the Pre-COP has already suggested that regular reviews will be important, at 5 year intervals.

Already the public messaging is that any agreement signed in Paris is just a waystop on delivering action. More promises and kicking the can down the road when nature is already starting to give us a real thumping with extreme weather.

If you want to read a more humorous (and darker, more pessimistic) account of Australia’s role in climate negotiations over the last 30 years, I suggest you take the 5 minutes to read PhD student Marc Hudson’s amusing blog article in the form of a FAQ: Learning Curve: Australia and the Climate Negotiations Paris.

So what is the weather like in Paris at the moment? Early November was exceptionally warm with a heatwave across Europe in the first two weeks of November, breaking numerous monthly temperature records. But the temperatures have finally tumbled in Paris after a record warm November start, down to a chilly temperature range of -1 to 6C.

“We reaffirmed our commitment to secure a legally binding climate change agreement applicable to all parties at COP21 in Paris. It must establish a durable platform for limiting global temperature rise to below 2°C, including through a long-term goal, accountability and transparency of contributions, and allowing for strengthening of ambition over time.”