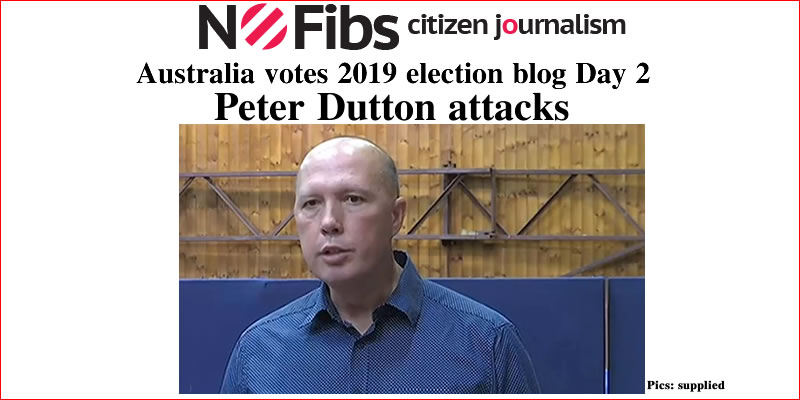 The youth vote in the seat of Griffith

Tony Abbott is back with another altered position on climate change. Nick Baker reports that Mr Abbott said, “The so-called settled science is not quite as settled as people say and that’s my position.” Tony Abbott not convinced by ‘so-called’ climate science.

Echoes from the late former prime minister, Malcolm Fraser, who drew attention to the extent to which Tony Abbott changes his mind on important policy.

“The climate change policy was one of them. If he’s changed it once, he can presumably change it again,” he told ABC’s Q&A program in 2010.

“I think Tony Abbott would do what he felt he needed to do to get into power or have power.”

The youth vote in the seat of Griffith

Jan Bowman has an update from the Queensland seat of Griffith. The incumbent is Terri Butler. “On March 15 this year an estimated 10,000 Queensland students defied the prime minister and the state premier and took the day off school to protest about what they see is a concerning lack of action on climate change. They were joined by parents, unionists, and a host of activist organisations.” Putting the voice of youth first.

Prime Minister Scott Morrison launched a tax attack on Labor’s policies claiming that treasury had conducted an evaluation as part of normal ‘tried and true’ process.

However, Treasury secretary Phil Gaetjens released a statement saying they were not asked to cost the party’s policies. David Crowe reported, “Labor has escalated a political fight over claims of a $387 billion tax burden under its election policies, prompting Treasury secretary Phil Gaetjens to say the government’s economic officials did not cost Labor policies.” ‘Morrison caught lying’: Bowen demands answers from Treasury over $387 billion tax costing.

In an effort to discredit his opponent for not living in the electorate of Dickson, Peter Dutton has attacked Labor candidate Ali France over her disability. Ms France uses a wheelchair when at home and a prosthetic when she’s out campaigning. She currently lives two kilometres outside of the electorate and has so far been unable to find accommodation within Dickson.

Mr Dutton lashed out accusing her of, “using her disability as an excuse for not moving into our electorate.”

Bevan Shields wrote, “It was only last Friday that Scott Morrison stood in his private courtyard at Parliament House and declared Australia had to lift its game in its treatment of people with disabilities.” Both sides expect the election to be dirty but few thought Peter Dutton would stoop so low so quickly.

Prime Minister Scott Morrison didn’t want to answer questions on the incident except to say he didn’t believe Mr Dutton had used disability as a political attack.

Mr Dutton began this line of attack earlier in the week. On Tuesday, he was asked if he expected to lose his seat.

Peak organisation, People With Disability Australia, responded with a statement expressing concern over Mr Dutton’s comments and called on the government to address the issue of housing.

Standing next to Ms France, deputy opposition leader, Tanya Plibersek, responded to the comments labelling Mr Dutton a hypocrite and a politician who is inaccessible to his constituents.

Through a spokeswoman, Mr Dutton pointed the finger at his constituents. Rohan Smith reported, “Minister Dutton was repeating the views and concerns about the Labor candidate, raised with him by constituents — that is, that she doesn’t live in the electorate and has told people locally that even if she wins the seat she won’t move into the electorate.” Peter Dutton claims Labor candidate using disability as ‘an excuse’ as battle turns bitter.

Ms France she was disappointed with the comment but not surrprised given the way the National Disability Insurance Scheme had been handled by the Coaltion.