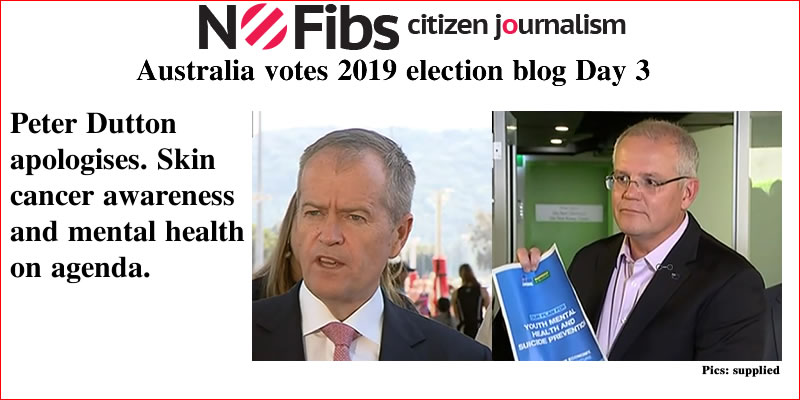 Election campaign posters disappear in Wentworth but not for Liberal candidate

Tony Abbott has been out and about in Warringah with The Daily Telegraph’s, Piers Akerman.

He’s also given Bill Shorten the mantle of Prime Minister.

Election campaign posters disappear in Wentworth but not for Liberal candidate

In a similar case of poster theft during the 2015 Queensland state election, a woman was captured on camera loading posters into a car belonging to candidate for Kallangur Shane King. The court found Jennifer Cochrane guilty and sentenced her to a 12-month $500 good behaviour bond. She turned out to be a media adviser to Peter Dutton. Media adviser for Immigration Minister Peter Dutton found guilty of stealing election sign of Labor candidate for Kallangur Shane King in January State election campaign.

Paul Karp reported, “On Saturday, the opposition will add a further $8.6m to work with Cancer Council Australia to relaunch a sun protection awareness campaign.” Coalition vows to ‘break the curse of youth suicide’ with mental health package.

Matt Coughlan reported, “Scott Morrison has declared funding mental health a top priority as he campaigns for the coalition to win re-election. The prime minister is hitting the hustings in Sydney on Saturday, targeting the Liberal-held seat of Reid after announcing a $42.1 million funding boost for mental health services for young and indigenous people.” Morrison pledges $42m mental health boost.

Just on those Labor policy cost allegations, Jane Norman put it to the prime minister that the $387 billion figure had not been provided by Treasury.

It appeared Peter Dutton wasn’t going to apologise to Ali France for his comments over her disability. Late yesterday Michael McKenna reported, “Peter Dutton is resisting Bill Shorten’s demands he apologise over his accusation that the Labor candidate in his marginal seat of Dickson was using her disability ‘as an excuse’ for not moving into the electorate.” Peter Dutton resists Bill Shorten’s demands to apologise to Dickson Labor candidate Ali France.

Labor Senator Kristina Keneally today took issue with Mr Dutton’s lack of response describing him as a “thug, mean and despicable”. She called on Prime Minister Scott Morrison to contact Mr Dutton and highlighted the PM’s call last week for a “new culture of respect” for people with disabilities.

At about the same time she was giving the press conference, Mr Dutton published a tweet with an apology.