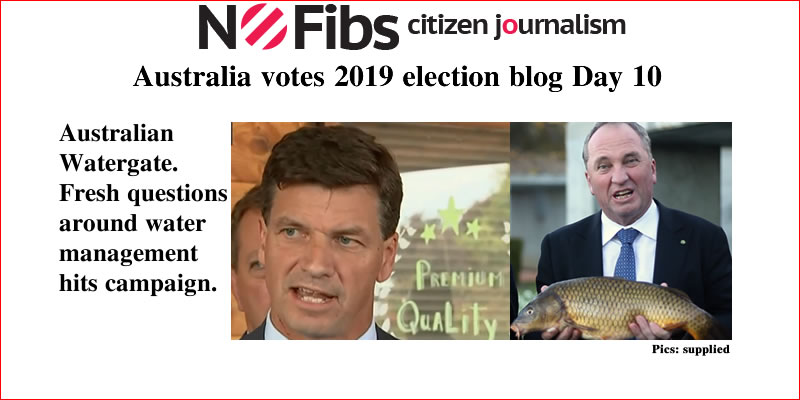 .Penalty rates to be restored under a Labor government

Wayne Jansson reports on the response in Farrer to the Australian Watergate scandal, “Farmers are ‘angry’ over allegations aired on The Project that record prices were paid by former Minister for Agriculture and Water Resources Barnaby Joyce under the buy-back scheme to a company founded by current Energy Minister Angus Taylor.” Farmers outraged over water ‘piracy’.

For a fourth day, journalist Jonathan Lea and Bill Shorten have debated the cost of and the cost of not tackling climate change.

Professor Kate Auty writes, “If you only watch the mass media you could still miss some big stories about the Murray-Darling Basin.” Feds failing to act on river reports.

Energy Minister Angus Taylor has threatened journalists with legal action after a series of Tweets by Ronni Salt was reposted by them. Lawyers acting for Mr Taylor stated that the allegations were “defamatory” and had “no basis in fact”.

Lane Sainty reported, “Lawyers acting for Taylor sent letters dated April 12 to journalists Margo Kingston and Michael West, placing them on notice that the federal minister for energy may sue and seek damages and costs.” Angus Taylor has threatened to sue journalists for sharing a Twitter thread.

NoFibs editor Margo Kingston was initially confused by the correspondence. She could not recall retweeting the thread but later realised her automated Twitter add-on, “Tweeted Times”, had reposted it.

Mr West confirmed to Ms Sainty that he had also received a letter from Mr Taylor’s lawyers and told her, “I’ve been exploring the claims and there’s an issue of public interest here that needs to be addressed.” Angus Taylor has threatened to sue journalists for sharing a Twitter thread.

While not accusing anyone of impropriety, on Wednesday Anne Davies wrote about Mr Taylor’s previous consultancy with a company called Eastern Australia Agriculture (EAA). She also noted there were outstanding questions around former Agriculture and Water Minister Barnaby Joyce and water buy-backs.

“Despite questions in the Senate, calls for papers and freedom of information requests, mystery still surrounds the reason the former agriculture minister Barnaby Joyce chose the companies he did for almost $200m of water buybacks in 2017,” she wrote. Questions over companies chosen for $200m of Murray-Darling water buybacks.

The same day, Mr Taylor responded to the article saying there was no basis to some of the claims circulating in the media.

“Are corporations profiteering from water licences with the help of politicians? Academic researcher, Triskele, continues the investigation into why scientific evidence was ignored in the #MurrayDarling catastrophe. In this instalment, Triskele focusses on Barnaby Joyce’s role as Water Minister in demonising open tender water buybacks while overseeing controversial ‘strategic purchases’ from Big Cotton, Tandou being a case in point.” Tandou Can Do: double standards in water purchases in the Murray-Darling Basin.

Assisted by journalists Laura Binnie, Tim Lamacraft and Michael West, Hamish Macdonald went to air for Thursday’s edition of The Project with a further exploration of the water buy-back issue and the transfer of money to offshore tax havens.

The report piqued the interest of other mainstream journalists.

Yesterday, Mr Macdonald released a statement from a spokesperson for Mr Taylor. The minister concluded all his activities relating to EAA prior to entering parliament. They also highlighted the difference between “having an interest” in a company and “being paid as a consultant”.

Greens Senator Sarah Hanson-Young today announced she was writing to the federal Auditor-General about the matters raised in the media and renewed her call for a Royal Commission into the overall water management system.

Mr West is expecting to publish an update on the case later today.

Opposition leader Bill Shorten has today commented on the Watergate issue saying if the prime minister is not 100 per cent certain over probity then he should agree to an audit or commission of inquiry.

Prime Minister Scott Morrison has this afternoon responded to the 2017 $80 million water buyback by saying it was initiated by the Queensland government and there was a high level of transparency.

Mr Joyce has now responded to the issue.

Based on the news, incumbent for the seat of Wentworth, Professor Kerryn Phelps, expressed her backing for the establishment of a national integrity and anti-corruption commission in the new parliament.