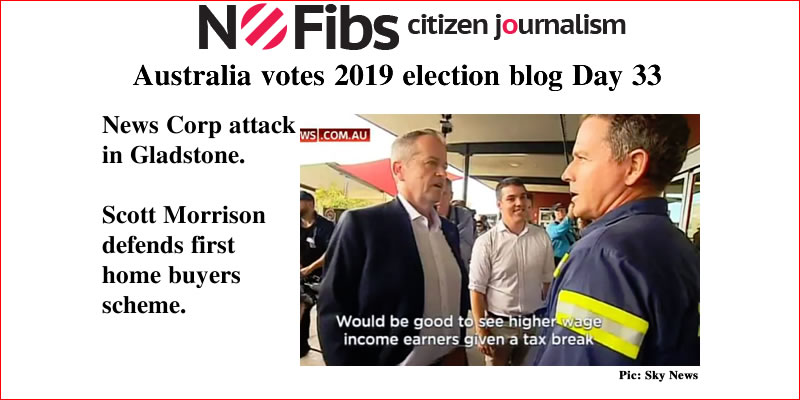 Ray Kingston closes in on the nation’s safest seat

Pastor Yodie Batzke holds Clive Palmer’s third spot on the Queensland senate ticket behind himself and his nephew, Martin Brewster.

Christopher Knaus reported, “A prominent Clive Palmer candidate posted pictures of a heavily pregnant woman with a noose around her belly and a warning that abortion rates were “Australia’s great shame. The post, and another comparing anti-abortionists to gun control campaigners, appears to have been scrubbed from the Facebook page of Yodie Batzke, a Queensland pastor and United Australia party Senate candidate for Queensland. They were posted in late January and February, before Batzke announced her candidacy in April.” Clive Palmer candidate posts anti-abortion picture of pregnant woman with noose.

Now it seems the adjunct lecturer may not be that at all.

Labor candidate for Dawson, Belinda Hassan, has endured an attempted arson attack on her car which was parked outside her home.

Mr Christensen has declined to engage with Ms Hassan over Twitter in the past.

Ray Kingston closes in on the nation’s safest seat

Margo Kingston reports, “The electorate of Mallee, until now, has been the safest seat in the nation.” Ray Kingston closes in on the nation’s safest seat.

It was revealed through a freedom of information request that Mr Morrison had considered similar changes to Labor on negative gearing. Dan Conifer reported, “Mr Morrison in February 2016 said there were “excesses” in negative gearing and that the government was considering changes.” Scott Morrison expressed interest in overhauling negative gearing, according to official documents.

“We looked at all those issues all those years ago and decided not to do it. I mean, that’s quite plain,” the PM told reporters.

The PM also used today’s housing blitz to champion the government’s first home buyers scheme which would allow people to pay five percent of a deposit on a home loan and the government picking up the difference on an industry standard twenty percent deposit. Opposition leader Bill Shorten pledged bipartisan support for the policy saying it was modest and would help up to ten thousand people.

News Corp has launched another attack on opposition leader Bill Shorten inferring that there was something suspicious after a worker was suspended for asking a taxation question in Gladstone last month. In the front page splash, Renee Viellaris falsely reported that the man was a “Gladstone Ports worker”. Sky News also falsely tweeted this after an interview with Ms Viellaris on Chris Kenny’s report.

Gladstone Ports Corporation (GPC) released a statement to clarify that the man was not their employee and was a sub-contractor.

Shannon Molloy also confirmed that the man worked for a company called Welcon Technologies and reported, “After The Courier-Mail began chasing the story on Friday, Welcon Technologies back flipped and reinstated the man’s employment.” Tradie dumped from job after bailing up Bill Shorten on tax cuts.

However, it wasn’t long before Queensland Liberal National Party (LNP) opposition leader, Deb Frecklington, launched an attack on Queensland Premier Annastacia Palaszczuk demanding answers on the state-owned GPC. It was clear Ms Frecklington had not read all of the reports or she had chosen to ignore the fact that the man was an employee of a private company.

The LNP’s shadow minister for education, Jarrod Bleijie, also piled in with false outrage and added to the conspiracy.

Noely wrote a good thread about the situation explaining why we should care about such misleading front pages.

After publishing the above, The Courier Mail’s Damien Tomlinson responded to the blog and defended the front page story. He alleged that the Queensland government had intervened in the matter.

Labeling NoFibs as “Murdoch haters” and “one-eyed News haters”, Mr Tomlinson supplied a link to a news clip featuring Queensland Minister for Transport and Main Roads, Mark Bailey, as evidence of the conspiracy. The 7News Brisbane journalist, Patrick Lion, is a former The Courier Mail reporter.