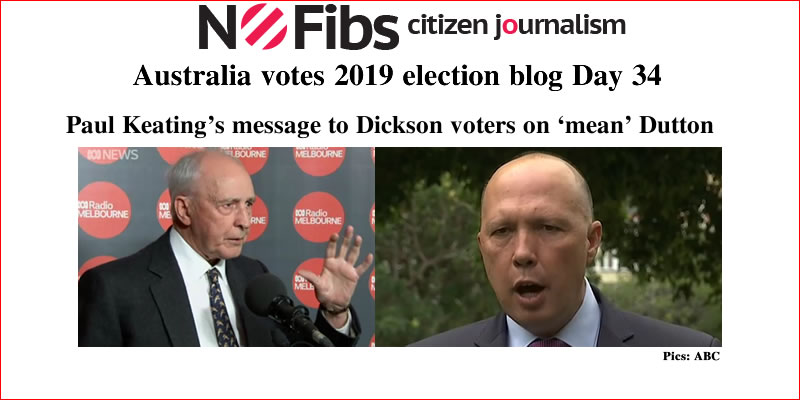 Scott Morrison campaigns in the marginal seat of Boothby

CSIRO was only given hours to approve Adani water plan

Margo Kingston reports, “A group of medical practitioners known as Border Doctors have made a direct call for funding to end metropolitan/regional health disparities in the communities of the NSW-Victorian border electorates of Farrer and Indi.” ‘Business as usual’ killing communities: Border Doctors’ letter to Indi and Farrer.

The political conflict between Home Affairs Minister Peter Dutton and former Prime Minister Paul Keating has escalated today. Mr Keating described Mr Dutton as “mean-spirited” and voters in Dickson now had “a chance to drive a political stake through his dark political heart.”

A the Labor campaign launch in Brisbane on May 5, Mr Keating had commented on Australia’s declining relationship with China and the scare campaign from Australia’s security agencies. He indicated that a Labor government would need to “clean them out”.

“When the security agencies are running foreign policy, the nutters are in charge,” he said.

Today Mr Keating fired back saying his “nutters” comment was code. “The foreign policy of Australia should be made in relation to the tectonic plates of power in our world and not some sort of university dormitory chit-chat, which intelligence agencies pick up in their signals intelligence and then that goes into the cabinet room informing foreign policy.”

Mr Dutton reacted shortly after using Twitter to blame Mr Keating for his father almost losing his small business and accused him of economic mismanagement.

Asked for his reaction to Mr Keating, Mr Shorten responded with, “Dutton is Dutton, and I think that everyone knows that.”

Prime Minister Scott Morrison said he did not wish to be distracted by Mr Keating today.

Opposition leader Bill Shorten says the current government submission on wages to the Fair Workplace Commission (FWC) would be removed under a Labor government and a new one submitted to tackle what he labeled as, “chronic wage stagnation.”

Scott Morrison campaigns in the marginal seat of Boothby

Prime Minister Scott Morrison has campaigned on housing again in the marginal seat of Boothby where he talked up the Coalition’s first home buyer’s scheme and talked down Labor’s negative gearing changes.

Treasurer Josh Frydenberg yesterday admitted that the first home buyers scheme had not been costed by treasury.

CSIRO was only given hours to approve Adani water plan

In the final days before the election date was called, the CSIRO was given an afternoon to give federal approval to the water plan for Adani’s Carmichael coal mine in Queensland.

Prime Minister Scott Morrison dismissed the report saying both the CSIRO and Geoscience had performed the work in an earlier report.

Footage has emerged of the incumbent Liberal Party MP for Swan in Western Australia bursting into an outrage after being repeatedly asked why he voted to cut penalty rates.

“Hey, I’ll tell you what. I didn’t vote for pedophiles, sex offenders and rapists like the Labor Party did!” he yelled in a slur against the Medivac Bill designed to allow refugees on Manus Island and Nauru to access medical treatment in Australia.