#AusVotes Day 5 – The clashing of One Nation and United Australia Party: @qldaah #qldpol 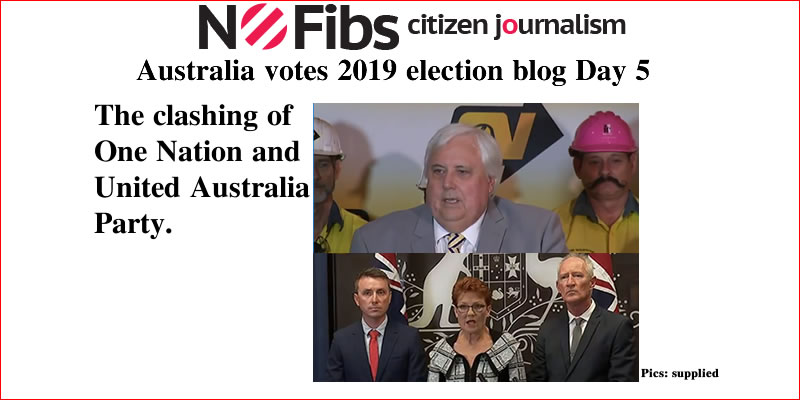 Scott Morrison has a go on the dozer in Deakin

Poll numbers for One Nation decline

Scott Morrison has a go on the dozer in Deakin

Prime Minister Scott Morrison felt relaxed today in Deakin as he twice hit the horn on a dozer and warned the media, “Key’s in it, look out!”

Present also was Michael Sukkar who was not as relaxed in responding to persistent questions over his role in the ousting of Malcolm Turnbull from the leadership last August.

Clive Palmer has suddenly agreed to pay Queensland Nickel workers but says the announcement has nothing to do with politics.

Josh Bavas reported that liquidators for Queensland Nickel had put the outstanding entitlements at approximately $7.16 million. Australian taxpayers had previously chipped in $66.86 million as part of the Commonwealth’s Fair Entitlements Guarantee for workers. It was unclear if Mr Palmer would be reimbursing the government fund. Clive Palmer promises to pay back workers’ entitlements while denying sacking anyone.

In mid 2018, member for Herbert, Cathy O’Toole, confronted Mr Palmer as he held a press conference at parliament in Canberra to announce that the former Pauline Hanson’s One Nation party senator Brian Burston had joined his United Australia Party after a falling out with Pauline Hanson.

“I don’t owe anyone, anything in north Queensland,” he declared.

Poll numbers for One Nation decline

Polling numbers for Pauline Hanson’s One Nation party have fallen away by two percentage points to four per cent, according to the latest Newspoll. The party were at 11 pc two years ago. It’s the first poll since the ABC screened Al Jazeera’s special investigation into the party on their attempt to secure donations from American gun lobbyists including the National Rifle Association. The documentary is, How to Sell A Massacre.

Pauline Hanson held a press conference in March declaring that the party was a victim of Qatar and the ABC.