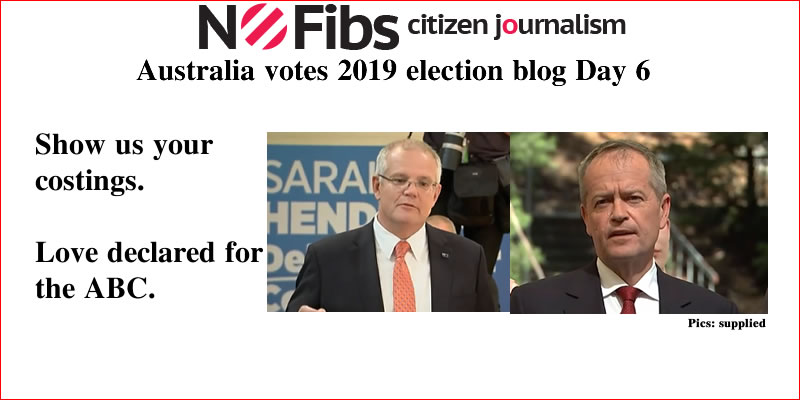 Love shown for the ABC

Margo Kingston has interviewed Rob Oakeshott on why he left the National Party and became independent. On the road with Rob Oakeshott in Cowper.

Love shown for the ABC

During a senior’s forum in Corangamite, which later turned out to be stacked with Liberal Party members, Prime Minister Scott Morrison was asked by an audience member about the ABC’s funding.

Member for Corangamite Sarah Henderson jumped in declaring her love for the ABC. Mr Morrison commended the ABC for their coverage of Australia’s recent natural disasters. He also spoke proudly about his suggestion of Ita Buttrose for the organisation’s Chair.

In stark contrast, the Liberal Party voted to privatise the ABC at their federal council last year.

Mr Morrison was also asked by an audience member what had happened to former leader, Malcolm Turnbull.

At a later press conference, Ms Henderson was asked about the high numbers of Liberal Party members at the senior’s forum.

It’s that time of the campaign when journalists start getting frustrated with the lack of costings for opposition policies. Oppositions tend to leave it to the last minute to reveal their costings to avoid attack ads being created by the government. The government, of course, makes mileage out of it portraying their opponents as being sneaky and hiding things.

Jonathan Lea described his interaction with Bill Shorten at a press conference this morning as ‘frustrating’ after he attempted to get the Labor leader to spill the beans on what the climate change policy would cost the economy.

In 2013, the situation was reversed. David Koch pleaded with the shadow treasurer Joe Hockey to release his policy costings.

It also happens at state elections. At the 2017 Queensland state election, Tim Nicholls wouldn’t give up any answers when the media asked.