Captain GetUp saving #IndiVotes from itself: @Jansant comments on #AusVotes 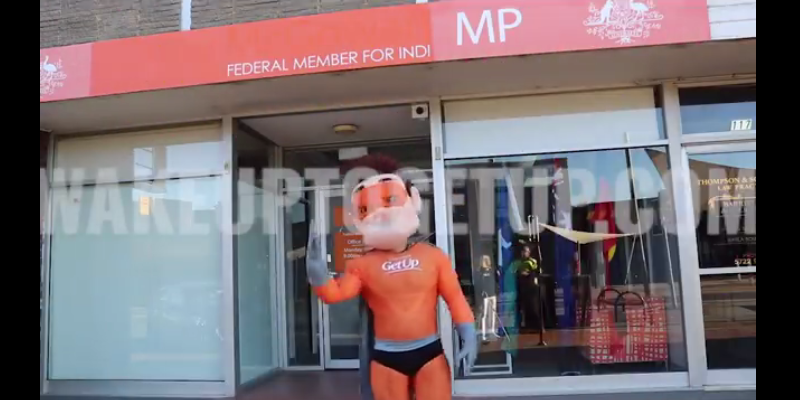 Prime Minister Scott Morrison dropped into Wangaratta on Wednesday this week for a quick press conference but did not take any questions from media — nothing to see here.

This follows Tuesday’s visit to the same Indi battleground by far-right climate change denial group Advance Australia’s Captain GetUp — and there was definitely something to see, but you had to be paying really close attention.

Since 2013, the Liberals have told anyone who’d listen that former Member for Indi Cathy McGowan is a Labor/Greens/GetUp! plant — the myth became an election perennial with an orange bloom.

Independent candidate for Indi Helen Haines has previously categorically denied any association between her and Get Up! — but have no fear Captain GetUp is here — able to spin tall tales in a single bound.

No amount of denial was going to stop Captain GetUp zipping into town to save the good people of Indi from themselves by telling us how to pronounce ‘Indi’ properly, right in front of Cathy McGowan’s former electorate office. Privileged locals got the heads up and gathered to watch, and during a break in filming, Captain Getup removed his full face covering to reveal a man bun.

The story so far…

Captain Getup, the inner-city, latte-sipping hipster who wants to tax your firstborn into oblivion, dons an orange, full-face covering that transforms him into a superhero who rushes in to save Indi from the economic Armageddon of renewable energy.

But hold on a moment! Someone ring the talent agency and find out who Hi-Vis Boy is — seen standing next to Advance Australia’s camera operator in the reflection of the window — and ask what the hell he’s doing on the Captain GetUp movie set? Maybe mild-mannered local reporter Clark Kent knows?

While savvy locals will be able to identify Hi-Vis Boy in the clip, No Fibs will keep his identity a secret; although we’ve been connecting the dots between Captain GetUp and local Liberal candidate Steve Martin for some time.

I’m not familiar with or involved with Advance Australia.

After being pressed on the issue:-

Although initially saying he was not familiar with Advance Australia, Martin then admits he is familiar with them and doesn’t think they’re hard-right.

Hi-Vis Boy will be able to clear the mystery up… if only he’d come out!