Cyclone Debbie off Queensland. Image by BOM from Himawari satellite

Tropical Cyclone Debbie is forecast to cross Central Queensland coast on Tuesday morning as a Category 4 Severe tropical cyclone. It will bring destructive winds greater than 200km per hour plus a storm surge with a king tide innundating low lying coastal properties, and torrential rain causing flooding. It is also cooling sections of the Great Barrier Reef reducing coral bleaching from an extensive and long lasting marine heatwave.

Tropical Cyclone Debbie draws heat from the unusually warm waters of the Coral Sea. This will help it increase in intensity to achieve possibly Category 4, and an outside chance as a Category 5 severe tropical cyclone before it strikes land.

It is the first tropical cyclone to strike the north Queensland coast since Cyclone Nathan in March 2015. Although it may not be as strong, it is being compared in size and extent to the Category 5 cyclone Yasi from 2011.

The destructive winds and storm surge may wreck havoc on low lying coastal areas when the cyclone comes ashore.

The cyclone brings substantial cloud cover to the region and helps to cool the general water temperature. It may thus help limit coral bleaching, which involves the expulsion of Zooxanthellae by the coral polyps when the waters get too warm. For those coral reefs in the southern reef system already suffering mild coral bleaching, it can help them recover more quickly. But for many corals the cyclone cooling the waters may already be too little, too late.

We needed the cyclone in February to make a real difference, but it may help mildly bleached corals in the south regain their colour faster https://t.co/LKLiExVjp1

Great Barrier Reef corals have again been subjected to extensive stress by elevated water temperatures in a marine heatwave. While the 2016 extensive coral bleaching was related to elevated temperatures from an El Nino event. Water temperatures have remained anomalously high this year while the El Nino Southern Oscillation (ENSO) was in a neutral phase.

At one stage tropical cyclones were seen as a primarily destructive force for coral reefs, but now they are seen as also bringing cloud cover and suppressing sea surface temperatures a little and preventing greater coral bleaching.

Higher atmospheric temperatures mean that more water vapour can be held aloft and therefore dumped causing high torrential rainfalls and local flash flooding and landslides. Indeed, the Bureau of Meteorology have issued a flood warning for Cyclone Debbie: “Heavy rainfall associated with Tropical Cyclone Debbie is expected to result in widespread daily totals of up to 200 mm from Monday. Isolated daily totals of up to 400 mm are possible particularly in the coastal catchments in the Flood Watch area.”

The 2011 Intergovernmental Panel on Climate Change (IPCC) Special Report on Managing the Risks of Extreme Events and Disasters to Advance Climate Change Adaptation (SREX) predicted that with Tropical Cyclones, Intensity may increase but frequency may stay the same or even decrease. Wind speeds are likely to increase, although perhaps not in all ocean basins. Medium confidence in a projected poleward shift of extra-tropical storm tracks, and a reduction in the average number of extra-tropical cyclones. (I blogged about this report here)

For Cyclone Debbie coastal warnings from St Lawrence to Cape Tribulation have been issued, but the cyclone path is presently forecast to impact between Hamilton Island and Cardwell with the city of Townsville also being in the impact zone.

Residents are being urged to put in place their emergency plans. The Premier has announced that 25 Schools in the affected area will be closed on Monday.

Already some supermarkets have seen their shelves of bottled water, bread and UHT milk denuded.

Bruce Gunn, Bureau of Meteorology (BoM) deputy regional director compared the storm with Cyclone Yasi from 2011, according to Channel 9 News, “Queensland hasn’t seen a coastal crossing for a couple of years now since Marcia or Nathan in 2015 but I think you could probably say that Debbie’s the most significant tropical cyclone since Yasi,” he said. “Not so much because of its intensity … mostly because of its size and extent. It’s quite a sizable system.”

Cyclone Debbie will bring a storm surge, which will be on top of the King tide about to happen. Many low level coastal areas will be impacted by this storm surge with the various Council’s publishing maps of affected areas and urging evacuation of those living in low lying coastal areas.

It’s a new moon on 28th March which accentuates ocean tides. These are forecast tidal figures from the Bureau of Meteorology website:

Here is the sea level anomaly projected for Monday 27 March for Queensland coast by the Bureau of Meteorology:

The European based Global Disaster and Co-ordination System (GDACS) has issued an orange alert for storm surge associated with Cyclone Debbie, with modelling showing a 1 metre to 1.2 metre storm surge. This will be above the usual high tide levels. At Mackay (outer harbour) the king tide high water mark is estimated at 5.93 metres at 10:54am on Tuesday.

The GDACS cyclone classification system is based on Saffir-Simpson Category scale (not used in Australia), which presently classifies Cyclone Debbie as a Category 3 storm in this system, with maximum sustained wind speed: 194 km/h (update 5).

#CycloneDebbie upgraded to Cat 4 with wind gusts up to 260kph, window closing for evacuations from low lying coastal areas via @ABCNews24 pic.twitter.com/lNCXo3XSyk

It is not possible to shelter from storm surge. If you're in a low-lying area, be prepared to evacuate. Plan today.@BOM_Qld #CycloneDebbie 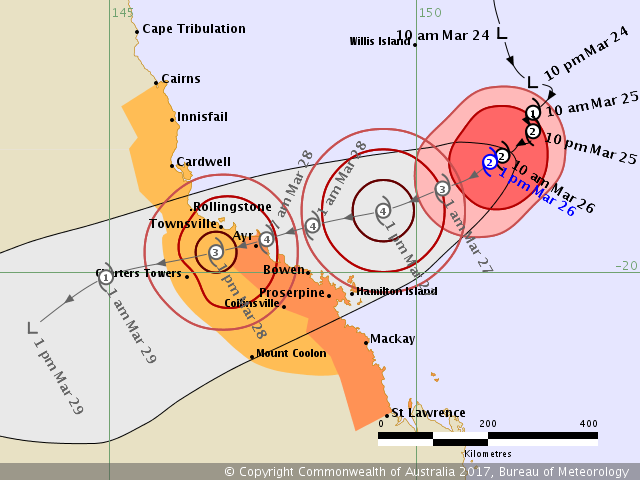 About 3500 people are reported to have left low-lying townships near Townsville.

Cyclone Debbie: Storm surge could be devastating for Bowen if she crosses mid-morning. #TCDebbie #7News https://t.co/TbrjU1z3Wf

Here is a full list of storm surge maps for those in the Burdekin region (Ayr and Home Hill). https://t.co/q6tojmhfK4 pic.twitter.com/Q6HRvkgkv6

Update Monday 27 March: The Premier, Annastacia Palaszczuk said on Monday afternoon that authorities are warning the window for people to move to safety is closing.

Up to 25,000 people in and around Mackay have been warned to evacuate to higher ground due to the storm surge. The Prtemier urged that people comply with evacuation orders.

It now seems that the cyclone is tracking further south and likely to make landfall over the Whitsinday Islands and south of Bowen. Much of the impact will be felt on the south side of the cyclone at landfall, which includes the low lying city of Mackay. The storm surge may be 2 metres to 4 metres which will inundate many houses around Mackay.

‘We are very concerned about the perspective tidal surge in MacKay. Many people know living in MacKay it is quite low lying,’ said the Premier as reported by Skynews.

“A harrowing night for a lot of families”

“Emergency Alerts for a storm surge have been issued by Mackay Regional Council for the areas of: North Pioneer; South Pioneer; Louisa Creek; Armstrong’s Beach; Dunrock; Ball Bay; Freshwater Point; Grasstree; Half Tide and Seaforth. Council has advised of a storm tide warning which may impact the Green, Red and Orange zones on Monday evening and Tuesday morning. Residents are advised to prepare and act for inundation of properties located in the evacuation zone.” says the Emergency Alert for Mackay as at 2.45pm Mon 27 Mar

Background: Read the current blog on Cyclone Debbie storm surge by Dr. Hal Needham, Founder and President of Marine Weather and Climate, based in Houston, Texas. Dr. Needham has been conducting data-driven storm surge research since 2008.

The Queensland government have ordered closed ports between Townsville and Abbot Point. Much further south outside the cyclone impact zone the Port of Gladstone, the largest coal export port in the state, remains open at the moment. The Rail freight company Aurizon, who have recently put in an application for funding the Adani rail link, have said that unloading of coal trains has ceased at the ports of Abbot Point, Dalrymple Bay and Hay Point due to the cyclone.

According to an SBS report, existing coal mines in the Bowen Basin and at least one gold mine may be temporarily closed down by the cyclone as it moves inland.

According to The Age report, BHP Billiton suspended operations at its South Walker Creek coal mine, in the Bowen basin just to the south of the cyclone’s expected path. Glencore also said it was stopping coal operations at the Collinsville and Newlands mines.

Cycline Debbie appears to be tracking for landfall just south of Bowen, and now forecast to make landfall about 11am Tuesday. Wave height Tuesday afternoon along the Bowen, Abbot Point, Airlie coast is predicted to be in the 5-8 metre range.

More concerning is that Adani’s Abbot Point coal terminal and rail line only include allowance for a 1 metre storm surge. Coal is already located at Abbot Point and a higher storm tide might threaten contamination of the area, including the Calley wetlands.

What risk does this pose moving forward with regard to increased coal traffic through Abbot Point if the Adani Carmichael coal mine and rail link is built? Increasing Sea level rise will only further undermine the risk management for the rail and coal terminal from severe cyclones.

#CycloneDebbie path as at 8pm when upgraded to a severe Category 4 cyclone with wind gusts up to 260kph #BOM pic.twitter.com/7KWoV2lTP3

And it looks like Cyclone Debbie is heading right at the Abbot Point #coal export terminal! #climate https://t.co/InwvKqsDJf

Using the Bureau of Meterology Meteye service, this map shows the 5 to 8 metre wave surge along the north facing coast from Airlie Beach to Bowen to Abbot Point at 2pm on Tuesday, a matter of a few hours after Debbie’s eye wall is expected to pass the area. The wave storm surge is projected to hit Airlie Beach just before 11am and perhaps last for several hours 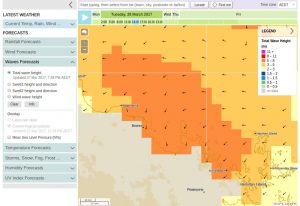 I wasn’t the only one to note this. Dr Hal Needham, who researches storm surges also noted and predicted this impact.