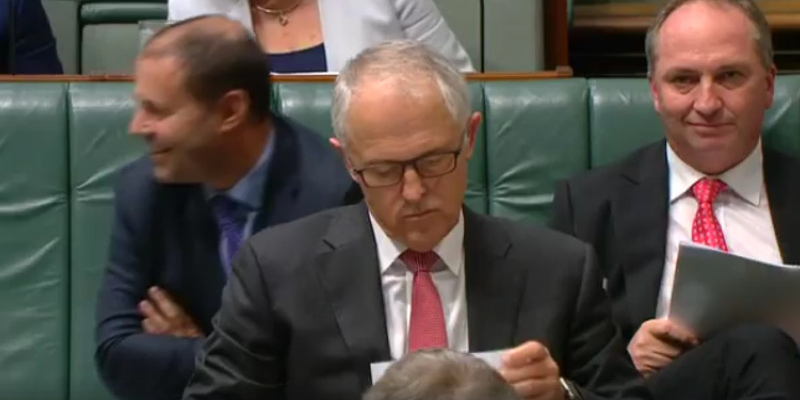 Those uppity Greens are daring to speak about climate change while severe Tropical Cyclone Debbie beat the shit out of the Whitsunday Islands (Read this report of Hamilton Island), Proserpine and Bowen, and now threatens extensive flooding from torrential rainfall for central and SE coastal Queensland.

The accusatory tone from Malcolm Turnbull and other Liberal government ministers is ‘How dare you try to politicise an extreme weather event, when we should all be pulling together.’, while they conveniently forget the South Australian storms in September 2016 which resulted in a system black which they conveniently and erroneously immediately blamed on the fault of the wind turbines in South Australia.

They have continued to prosecute an attack on wind energy and South Australia, despite a BOM report blaming the primary cause as the cyclonic storm with 260km per hour wind gusts. AEMO also put the primary cause as the destructive winds destroying transmission towers, but also identified in the final report that automatic wind generator protection settings (since updated) contributed to the System Black event.

No pulling together for South Australia, Queensland, or in fact all of Australia, in it’s time of need to resolve the lack of coherence in energy and climate policies.

Is there the taint of hypocrisy here? You bet. 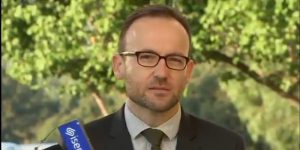 Adam Bandt, the Greens MP for Melbourne, had the audacity to ask a question of the Prime Minister in parliament today.
“My Question is to Prime Minister. He recently said that ‘keeping Australians safe was the highest priority and was the first duty of my government and every government’. We know burning more coal will make global warming worse. Scientists tell us it may mean fewer cyclones but they will be more intense when they hit. But on the very day Queenslanders were preparing for Cyclone Debbie, your Resources Minister dropped a front page story spruiking a new coal fired power station in that very state, and you backed him in. Given the destruction that cyclones reek upon our country, why do you push policies like burning more coal that will make cyclones more intense? Doesn’t your duty to keep Australians safe include everything you can to stop cyclones becoming more violent?”

You could see Turnbull’s internal fury on his face as Bandt asked the question, while in the background his Climate Change minister Josh Frydenberg appeared to be jovially communicating with someone stage right, and Deputy Prime Minister Barnaby Joyce smiled wryly.

Turnbull ponders reply to @AdamBandt climate question today on why he is pushing coal burning policies that will make cyclones more intense? pic.twitter.com/c0B8ba6B75

Turnbull’s response? A quick weather report on Cyclone Debbie, and talking up the contribution of Australian Defence Force personnel plus state emergency services workers who are starting the massive cleanup, before calling Bandt’s question as ‘contemptible’.

So, in other words, he has no answer on why he supports coal policies driving climate change which is driving fewer but more intense cyclones. Watch the full question and reply below:

The COALition jeering Adam Bandt question about global warming,
Turnbull turns on him for making "political point" after weather report

Biggest tell for the PM & the LNP is the yelling. Valid argument supports itself & has no need for volume. They're in trouble. #qt #auspol

The extreme reaction from Turnbull and others shows that Bandt hit a nerve. Well done Adam #auspol #climate

Of course some journalists are not also asking the hard question of Queensland’s Premier Annastacia Palaszczuk :

Yep, knew it: @RNBreakfast's Fran Kelly failed to ask Qld premier @AnnastaciaMP about the climate change link to #CycloneDebbie. Why not?

The Australian cartoonist John Kudelka was pretty spot on with the sign to this cyclone shelter:

But let’s backtrack a little.

Bandt has been needling the Prime Minister on Climate Change. Here is a question from last week asked in response to the ABC 4 Corners program of the Age of Consequences film on climate change and security.

The Resources Minister Matt Canavan has been a vocal advocate for building new coal plants in Queensland, and if necessary subsidising them through using the Northern Australian Infrastructure Fund. This is in addition to supporting the Adani coal mine development and supporting NAIF providing a subsidy to build a rail line to Abbot Point Coal Terminal.

On Monday morning while Cyclone Debbie was approaching the coast as a severe Category 4 cyclone, Adam Bandt started this discussion with a press conference and media release:

“Building a new coal fired power station now is like knowing cigarettes cause cancer but starting your kids on a pack a day, or knowing asbestos kills but building your family home with it anyway,” Mr. Bandt said.

“The more coal we burn, the more intense extreme weather events like Cyclone Debbie will be. People will suffer.

“Matt Canavan, who hails from the state that this cyclone is hitting, is calling this ‘an investment’ when it’s just a straight-out subsidy for aging and dangerous technology. This is a reprehensible move that takes money from schools and hospitals to prop up a declining industry that’s threatening our way of life.”

A federal minister says it is disgraceful the Greens have linked potential deaths from #CycloneDebbie to coal-fired power. #auspol @abcnews pic.twitter.com/nZjdDt6wSh

Turnbull and Frydenberg attacked renewables immediately after SA storms event, without waiting for the factual evidence. Read more on this at The Conversation: ‘We must keep the lights on’: how a cyclone was used to attack renewables.

For 6 months Turnbull has attacked renewable energy. Time he stood up to the hard-right of his party & dealt with his energy crisis. #auspol pic.twitter.com/WQpc9OzMdn

Opposition Leader Bill Shorten was critical of the language of Bandt’s comments, while not criticising the substance, according to this report.

Adam Bandt has the support of his parliamentary colleagues in his comments that Turnbull has “blood on his hands’ if he continues his support for coal over a stronger climate action policy, according to this Sydney Morning Herald report.

.@JoshFrydenberg Why is it "unconscionable" to point out the link between #fossilfuel combustion & extreme weather? It's science 101 #auspol

On Wednesday Adam Bandt was standing by his “blood on his hands” comments on coal, climate change and Cyclone Debbie, according to this Skynews interview.

.@AdamBandt stands by his comments that the PM will have 'blood on his hands' if he continues to burn coal. MORE https://t.co/FoVjbRpnjL pic.twitter.com/WFuAJtT0d9

And right wing climate denialist comentator Andrew Bolt? He says it is time to fight the Green scares with science.

LIVE NOW: It must be time to fight back. Fight the green scares with science. Live on @SkyNewsAust right now pic.twitter.com/nffk1WRrLg

So let’s look at the science regarding frequency and intensity of cyclones in the South Pacific. The Conversation did a factcheck article on this in March 2015: FactCheck: is global warming intensifying cyclones in the Pacific?. We know that coal when burnt produces carbon dioxide, a strong greenhouse gas that accumulates in the atmosphere. It is the major cause of global warming that we see (despite Senator Malcolm Roberts protests) Warming atmospheric temperatures, and warming ocean temperatures is affecting the long term frequency and intensity trend of tropical cyclones. Bandt’s comments would appear to be aligned with this science.

In February 2017 The Climate Council released the report ‘Cranking Up The Intensity: Climate Change and Extreme Weather Events’ which argued that the evidence linking climate change to storms and heavy rainfall is growing.

“It’s no longer a question of if climate change is influencing an extreme weather event but to what extent,” climate scientist Professor Will Steffen said. “All extreme weather events are now occurring in an atmosphere that is hotter and wetter than it was sixty years ago. There is more energy in the system to drive more extreme weather.”

What #CycloneDebbie means for the Great Barrier Reef – and it doesn't look good: https://t.co/lX8Zs2sEZ0 via @smh #gbr #Debbie #TCdebbie

The Climate Council’s Dr Martin Rice told the ABC in January 2017 that global warming temperature rises could have devastating consequences for humanity. “It’s hugely concerning, most of the heat goes into the oceans.”

He explained that the impact of global warming was already being felt in Queensland. “We’ve already seen that with the coral bleaching on the Great Barrier Reef,” he said. “We can expect and we are already seeing more intense heatwaves. What’s worrying is the overnight temperatures, we are not having that cool reprieve that we should in the evening, so that’s when we start to get in trouble.”

“Simply it’s our burning of fossil fuels, coal, oil and gas,” he said. “We could be looking at [an increase] of up to 4 or 5 degrees Celsius by 2100. That has huge implications for ecosystems.”

Climate change impact in Queensland coastal areas is likely to be particularly severe, where it is prone to storm surges. “The storm surges are riding on elevated sea levels and so we’re going to see much more destructive storms and perhaps more intense cyclone activity in Queensland,” he said. “We have an option, we simply must reduce drastically and rapidly our emissions.”

Read Peter Hannam’s report on the threat of storm surges with Cyclone Debbie at the Sydney Morning Herald: Biggest threat may come from ‘storm tide’ as tempest builds. The storm surge was up to 2.75 metres at Laguna Quays, with many places recording above 1 metre. While many recent buildings have been built to cyclone standards, storm surge is just not considered yet can be the most damaging impact. As it eventuated higher storm surge as anticipated did not eventuate.

So millions of tons of #coal at existing Abbot Point terminal will be hit by #CycloneDebbie storm surge, big contamination disaster? https://t.co/RMQDXEewLw

Abbot Point #coal export loader would not be a happy place with a 3-metre storm surge. #cyclonedebbie #climate pic.twitter.com/7qXRco5XF8

Hal Needham is a climate scientist based in Texas who runs a blog on storm surges. You can read his initial assessment of the storm surge associated with Cyclone Debbie: Tropical Cyclone Debbie Pounds Queensland with Powerful Storm Surge

For the SA storms event being blamed on renewables and specifically wind turbines tripping out, read about this at The Conversation: ‘We must keep the lights on’: how a cyclone was used to attack renewables.

There was an interesting comment from the Science Media Centre. Professor Barbara Norman, Foundation Chair, Urban & Regional Planning and Director, Canberra Urban & Regional Futures (CURF) at the University of Canberra outlined that Australia has no national coastal strategy to manage sea level rise or extreme weather event impacts on coasts. This is despite the large proportion of our population and infrastructure at coastal sites. Something to ponder.

“We have no national coastal strategy despite over 25 national inquires/reports recommending that we do.

“We have no plan to minimise the impacts of extreme events and climate change on coastal communities despite a comprehensive parliamentary inquiry recommending that we do.

“We now face billions of dollars of costs that will only continue to escalate in the future in the face of no action.

“We will grow from 24 million people to 40 million people by 2050 with the vast majority living in urban coastal centres. We need a plan of action to be climate ready.”

Coal mine disruption in the Bowen Basin might be a small temporary silver lining for climate activists concerned about coal emissions and climate change. It seems #Cyclone Debbie will disrupt several million tonnes of coal production from the Bowen basin coal mines due to mine flooding. Debbie is dropping an awful amount of rain in the area that will disrupt production for some time.