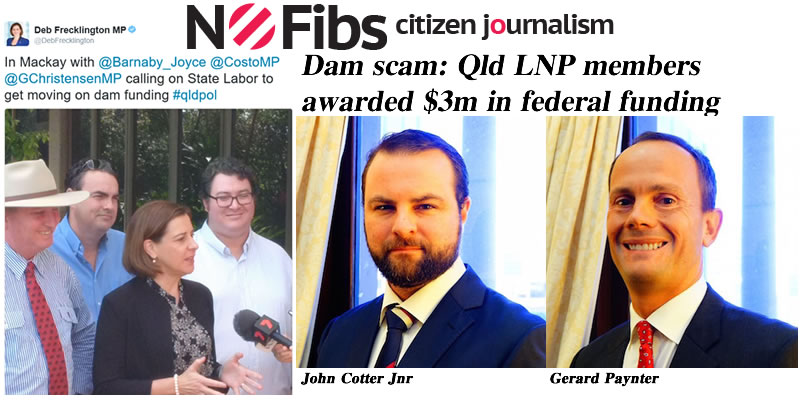 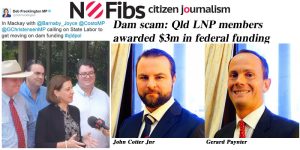 Another $12 million in federal government grants has found its way to the Queensland Liberal National Party (LNP) linked company, Bowen River Utilities, for the feasability into the latest version of the Urannah dam scheme.

Ben Smee reports, “The new project’s proponent and the recipient of the federal grants – Bowen River Utilities – is worth $100 on paper and run by John Cotter Jr, a former member of the LNP executive.”

In June 2020, we learnt that Queensland Opposition Leader Deb Frecklington had links to Bowen River Utilities through her husband, Jason.

Ms Frecklington denied there was any conflict of interest in the arrangement.

"Not a glamorous job". Deb Frecklington asked about the potential COI in the Urannah Dam project that her husband Jason is working on with traditional owners & landholders. #qldpol pic.twitter.com/co4KG7EiB9

Read more on the 2016 funding grants below.

ABC investigative journalist, Mark Willacy, has revealed a controversial allotment of federal funding to a consortium which involves high ranking members of the Queensland Liberal National Party. The project is to provide a feasibility study for the building of a dam at Urannah.

Brisbane based Initiative Capital was awarded the funds to complete the task. It was founded by Managing Director, John Cotter jnr. The company describes itself as a, “global leader in public private partnerships”. Mr Cotter jnr is also a member of the Qld LNP, a key fundraiser and part of the powerful state executive.

The Cotter family, John snr and jnr, is familiar to Queensland. In April 2012, John snr was named chairman of Queensland’s Gasfields Commission. His son was running FlindersGroup, a mining sector project management company.

IC Executive Director, Gerard Paynter, is also a LNP member and managing director of lobbying firm Barton Deakin which says on its website, “Barton Deakin is here to help business work more effectively with Liberal / National Governments and Oppositions across Australia and New Zealand.” He was also a former Young Liberal president.

Acting Prime Minister and Nationals leader, Barnaby Joyce, toured north Queensland this week to promote up to fifteen dam building projects. A spokesman told the ABC that the bid had been submitted by the Queensland Government.

Not so, said Water Supply Minister Mark Bailey. Mr Joyce had been previously told in a letter that the Urannah Dam project was not a priority of the State Government for funding from the Commonwealth.

“Would like to emphasise that whilst the Queensland Government will be forwarding all applications it receives this does not indicate any formal endorsement or support for particular projects,” he wrote.

With Mr Joyce this week was Queensland Deputy Opposition Leader, Deb Frecklington, who confirmed to the local Daily Mercury that $3 million of a federally sponsored $20 million pool had been given for the Urannah Dam feasibility study. She went on to complain that the Queensland Government was inactive on the project.

“They are refusing to work with the federal government and refusing to do anything,” she claimed.

Ms Frecklington also released a statement outlining where the $20 million had been allocated for all of the feasibility studies across Queensland. It is not clear to which companies these projects have been allocated to date.

“Queensland received the largest share of any State for feasibility studies. The list of Queensland projects funded is below:

In the lead up to the 2016 federal election, two journalists from the Betoota Advocate asked Barnaby Joyce who his mentor was. His reply involved dams and the most famous of Queensland premiers, Sir Joh Bjelke-Petersen.

“Joh Bjelke-Petersen I always liked because he was a doer. Made things happen, sealed the roads, built the dams, got the universities in, got the international airports going. So, like most things in life, we like people who are doers. And – and he got ridiculed too. He was another person; everyone was always getting stuck into him,” he said.

Kingaroy based Deb Frecklington is also the downstream successor to Sir Joh Bjelke-Petersen’s old seat of Barambah. In 2001, after a redistribution, it became known as Nanango.

Also during the election, millions of dollars were promised by Prime Minister Malcolm Turnbull and Nationals leader Barnaby Joyce for dams across marginal Queensland Coalition seats without any feasibility studies having been completed.

“The commitment to the Rookwood weir here in Rockhampton is going to result in millions of dollars in extra agricultural production,” Prime Minister Malcolm Turnbull told the media.

“We’re committing to feasability studies right across Queensland,” he said.

The Wiri and Birri people have expressed concern about the Urannah Dam project. At their website they write, “The proposed Urannah Dam project does not warrant the environmental destruction and risks to the land and rivers of Urannah, an area of highly sensitive Cultural and Environmental value of Eungella Hinterlands and surrounding areas of ecological importance. This project has always been a great concern for the First Nations people, locals, farmers, environmentalists and scientists.”