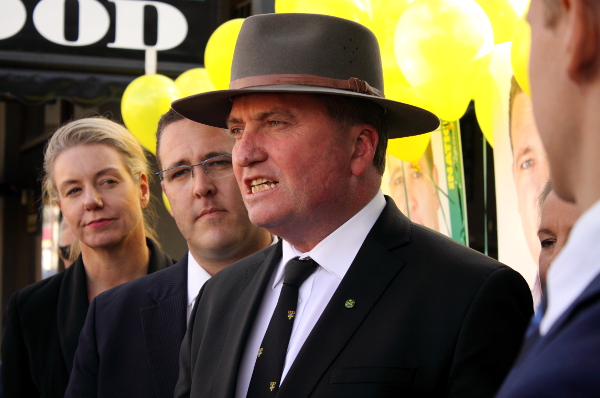 As expected, #Indivotes got a whole lot more interesting with pre-polling, the Deputy Prime Minister Barnaby Joyce (@Barnaby_Joyce) even parachuted Mark Latham into the marginal seat.

On the Sunday before pre-polling, Cathy McGowan MP (@IndigoCathy), Marty Corboy (@martycorboynats) and former Nationals member for Murray Valley Ken Jasper, put on a very public display of (and I select my word carefully) unity.

That’s unity in stopping Indi from falling back into the hands of Sophie Mirabella and the Liberals. 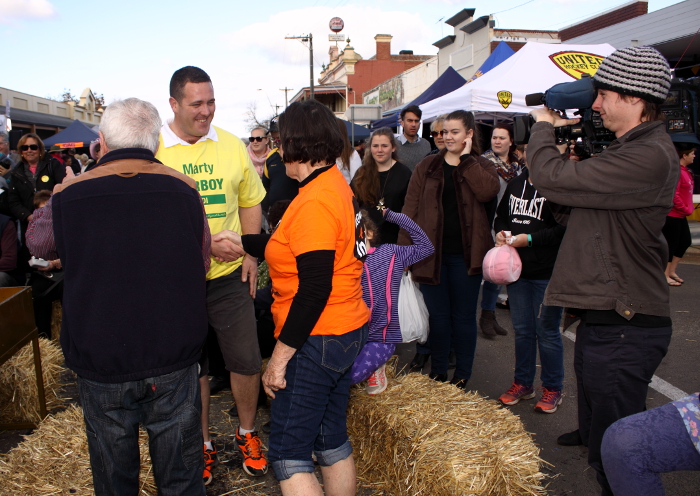 Corboy on his fluoro shoes:

On Wednesday The Border Mail (TBM) ran a story that led with:

NATIONALS’ candidate Marty Corboy has distanced himself from party veteran Ken Jasper who will weigh into the battle for Indi on Thursday.

The lead photo for TBM piece shows Jasper, Corboy and McGowan, smiles all round at Winery Walkabout, Rutherglen – Jasper’s is part smirk.

The Border Mail piece went on to say:

Mr Corboy won’t be joining Mr Jasper in Rutherglen when the former state parliamentarian is expected to reaffirm his support for the National Party candidate in the July 2 election. 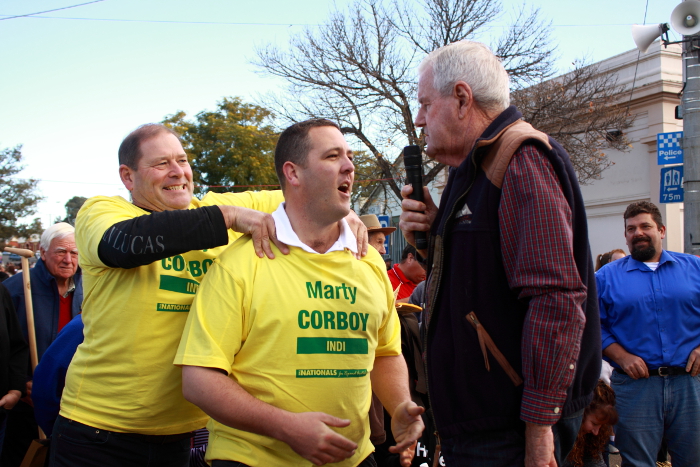 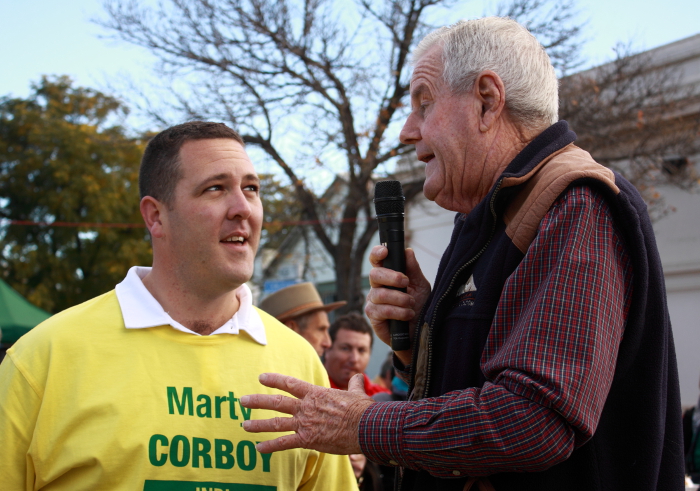 Corboy and Jasper talk to the crowd at Rutherglen. Photo: @jansant

More photos of Corboy distancing himself from Ken Jasper.

On Thursday Jasper urged voters to give McGowan their 2nd preference saying:

I’m an individual, I’m a National Party member, yes, the Coalition has a recommendation, but I don’t have to stand by that recommendation

Jasper is asking National voters to give their 2nd preference to McGowan.

At last years Winery Walkabout, Jasper told No Fibs he was hoping the party wouldn’t run a candidate against McGowan – that was always wishful thinking.

There was never any doubt Jasper would support McGowan over Mirabella. The question was always would he work from inside or outside party.

His decision to stay in the party and publicly declare his hand rather than running a covert whisper campaign is reflective of his straight shooter reputation.

Jasper’s support was critical to McGowan’s 2013 win, Corboy will hope for some of that.

Beyond the core aim of stopping Mirabella, if Corboy is to impress party leaders  he needs to finish over the top of the Liberal.

Why would Corboy distance himself from the one man who can help him win real influence in the party machine?

There’s much more to lose by standing next to Jasper at anything other than light hearted photo opportunities than can possibly be gained.

The risk of being challenged in front of media by voters over his extreme religous right wing views is real –  linking Jasper to these views must be avoided.

Yeah, for me a really weird TBM lead.

Proud to be at the opening of the Wahgunyah recreation reserve upgrade tonight with Bridget McKenzie #indivotes pic.twitter.com/svlnKSKdYA

There’s never been a more exciting time for a photo op with a Nationals Senator.

During the 2013 campaign, No Fibs asked McGowan if she had been talking with former Deputy Prime Minister Tim Fischer about her campaign. Her reply: “Not this week.”

On Friday, TBM again repeated the claim Corboy was distancing himself from Jasper, offering as evidence:

What else could he say? It’s pretty clear the Victorian Nationals are all working together to ensure Indi doesn’t fall back into Liberal hands.

Which brings us back to Joyce likening Jasper to former Labor Leader, Mark Latham.

We all (including many conservatives) take the piss out of Joyce, but for my part, I’ve never assumed that meant he was stupid – far from it.

It’s hard to imagine Joyce is not aware the Victorian National Party are running an ‘anyone but Sophie’ campaign.

It’s also hard to believe Joyce is unaware of Jasper’s reputation in the community, and that his comment would be taken any way other than more newsworthy hyperbole.

Media in Indi can be described as patchy in that many sources don’t get into some of the smaller towns.

Where I am it can be hard to get your hands on a copy of The Border Mail, Wangaratta Chronicle and The Benalla Ensign without going to one of the those towns.

There are valleys in the electorate you can only get half the free to air television stations, where I am on any given day we can lose reception on ABC TV, SBS, WIN and Ten.

Some areas of the electorate get their TV and Newspapers from sources not based in Indi.

Joyce’s comments would not have damaged Jasper’s campaign in the slightest, but they certainly would’ve substantially increased awareness in the electorate that Jasper is asking people to preference McGowan over Mirabella.

Even for Independents, sometimes politics is a team sport.