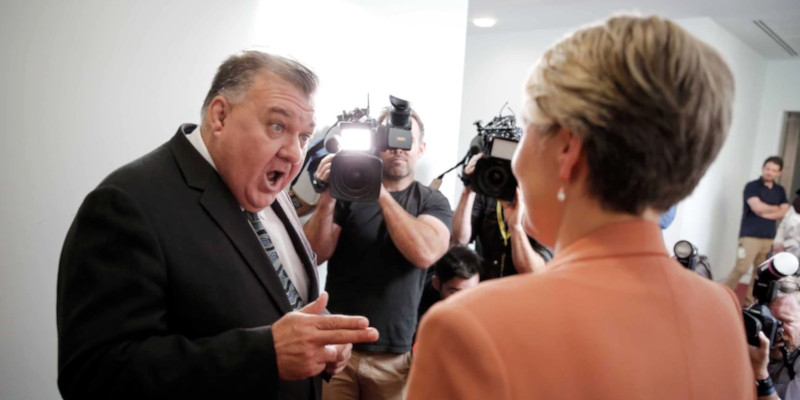 Linda is the founder of Voices for Hughes in that outer-metro southern Sydney electorate. She is interested in cultural shifts, political landscape and subtle (and not so subtle) policy impacts on the population.

Margo: I met Linda Seymour (@hughesrenews), the founder of Voices for Hughes (@humansofhughes), in March at a #march4justice after party in Canberra. Back then Craig Kelly had just moved to the crossbench and said he’d stand as a Clive Palmer-backed independent after refusing to pull his head in as a purveyor of anti-vaccination material and fake COVID-19 cures. This week he announced he’d joined Palmer’s United Australia Party (UAP) as leader and would spend big to keep the seat.

So there’ll be big money politics on steroids in this safe outer-metro southern Sydney seat this election, and up against the Libs and Clive’s UAP will be a community candidate chosen by a group founded and led by an architectural communications expert who’s travelled the world advising on several Olympic Games and International Convention Centres. Since COVID ended her work when it struck early last year, Linda has transformed herself into a full-time volunteer community organiser on instinct and a determination to alchemise rage at Mr Kelly’s ‘representation’ of the place she calls home.

I attended the launch of Voices for Hughes by Dr Kerryn Phelps in May (my Twitter report below) and interviewed her for the #transitzone podcast. Here’s her response to my request for a post to Hughes Voters on their choices this election.

436. Introducing @HughesRenews who’s in @HumansOfHughes, a ‘Voices for’ group to elect a community independent at #HughesVotes.

Watching the COVID press conferences, we are instinctively aware when we are being spoken at, down to, admonished or given a pat on the head. We can determine when the messages are directed at “others” or “us”. We are told we are all in this together, and yet we can’t even feel as though we are spoken to. There are clear problems, and hindsight shows that different decisions made on timing and lockdown rules would have had a better outcome. Instead of any acknowledgement that a different path would have had better outcomes, there are just words and slogans that are increasingly incredulous. Honesty and authenticity in words have been lost, instead they’ve been sent to the marketing department for a massage of nothingness.

You know how Facebook throws memories at you? Well, this one from August last year popped up for me a year on before I was out of bed and had my first coffee.

It’s been hilarious getting to know you over the past years. Your comedy routine on climate change denial is classic stand up! And fact checking the BOM, comic genius! Those listening to scientific consensus are “leftist Marxist fascists”, no regular comic would even consider stringing those labels together. I’m in awe.

I think one of my favourite gags of yours is congratulating the integrity of Azerbaijani elections. You know, the electoral system that announces the winner before the vote. Brilliant.

Defending Pell before trial, after trial, when convicted and gloating when acquitted without so much as referring to the heinous subject matter, I thought this was a strange detachment from humanity but clearly it was all for the laughs.

Oh, the one about how Russia should be “slightly overlooked” on the downing of MH17. What was it you said about the three children of Anthony Maslin who died? Oh that’s right, nothing will bring them back so we should “overlook” the things Russia have gotten away with. “That is the price we have to pay, sometimes, to have good relations going forward.” I recall your party being pretty pissed off about that. Julie Bishop especially wasn’t too happy, I guess when you meet the families of the dead it’s hard to have a laugh. But hey, she’s female, they’re too soft to play ball, right?

Gosh Craig, so much material to get through!

Bushfires! Wow. Just Wow. Posting about temperatures in Siberia as your country burns. I never really quite understood that, but I’ll leave that masterstroke to you. Lots of your readers seem to enjoy it. I guess they weren’t fighting fires, being evacuated or living through losing everything including loved ones.

I suspect most weren’t even in Australia. Where are your followers from Craig, do you have many from Hughes? Sorry… I digress.

Where was I, that’s right, bushfires. I’m pretty sure you and your sunburnt country with flooding plains really got down and dirty back then (was it really only a few months ago?). Why spend time showing concern when you could light your own fire under your base. Happy days hey Craig? I could talk fires all night with you, but hang on, look here comes a pandemic!

Wow the material a pandemic generates. What should you do first? I know – yell at the states! Not our state of course, but whoa check out Victoria would you! Victoriastan – such a clever play on words. I bet you just wowed your English teachers, not to mention history teachers. What was it you said about Dan Andrews? Oh, that’s right, he was totalitarian in his contact curbing measures.

Bloody hell – look over there, it’s one of the greatest social movements BLM (Black Lives Matter).

What to do? Of course, get on your stats and race bait. Aboriginal deaths in custody, what fun to play with those numbers. Why unite when you can divide?! Nice one – no one should ever hope for good outcomes for those that face inbuilt systemic racial inequality.

Hey, check out your new Captain Cook statue!! What is it you said “up yours to the Year-Zero neo-Marxist vandals” I am sorry, but WTF does that even mean?  I guess the 1800 Aboriginal and or Torres Strait Islander constituents might understand your meaning. Great work Craig, we’re all feeling the love.

And now whoa second pandemic outbreak worse than the first! “Poor Victoria”, some might say. But not you, sensitivity is for mere mortals. While snowflakes stand with Victoria and pathetically hope that all our best brains and some social cohesion and responsibility might just work to stop the spread, you have much better ideas.

Lock up the Victorian Premier Dan Andrews for murder! Claim he has blood on his hands! Go from scientist to doctor – Therapeutic Goods Administration be damned. You have the inside goods on how hydroxychloroquine the anti-malaria drug will solve the ills of a pandemic.

Why on Earth are the world’s greatest minds not turning to you on everything? The burden this must present you with, to know so much and have no one listen.

But we listen Craig. We have to. You are our voice in parliament. You “represent” us.

I thought you were a comedian, turns out you are just plain dangerous.

We may be wearing masks to counter smoke and pandemics, but we are not gagged. We are going to get louder and louder.

Our MP had crossed so many lines by this point he was beyond troubling. And yet no-one in the Liberal party called him out.

Our MP made constant Trumpian references, but he didn’t “follow” Trump, they were always cut from the same cloth. Former President Trump just seemed to embolden him. It did not matter that his base was from overseas or from the corners of our country, so long as the likes on Facebook rolled in and his followers increased, Craig Kelly’s peddling of outrage continued. Unabated.

There were repeated calls for the Prime Minister to censure him over his scaremongering of vaccines and his promotion of the insurrection at Capitol Hill. But there was no admonishment, just silence, until this in February: “He’s not my doctor and he’s not yours. But he does a great job in Hughes.”

Sorry, what? Our electorate was just sloganeered into the history books.

It was apparent that we were cast as an electorate that thought our MP was more than acceptable, he was good. By extension, Hughes became a bit of a laughing stock.

The anger in conversations in my own circles was most palpable from traditional Liberal voters. Like everyone, we have friends of all voting persuasions, and unlike what is on display in Parliament, we often find common ground.

Craig Kelly aside, that commonality is most often played out as frustration at the way action on climate change is used as a political football. We shake our heads in dismay that there is no code of conduct, zero accountability and no integrity commission. Sure, we’ll bat the ball around over many aspects of policy and society, and that’s healthy. A good conversation will see people change their minds or be open to change.

One thing we all categorically agree on is that a good independent is what’s needed in Hughes. For over a decade our electorate had been taken for granted, used to give fringe views a home. It’s time for dignity and intelligent nonpartisan representation. That excludes the type of independent Craig Kelly is. He is dependent on outrage and he is also dependent on Clive Palmer and his billions.

At the next election, we guarantee you, you’ll have a choice. But it’ll be an easy choice.

If you’ve made it this far, you’ve busted through the marketing rules that says we don’t stop and think.

If I’m wrong, and we don’t have the capacity to engage, tomorrow it’ll be a photo of a cat playing bingo.

19. Drove to Sydney for the launch of the @HumansOfHughes quest to replace Craig Kelly with a quality independent at #HughesVotes. Wattle Grove Community Centre is the launch spot, next to a busy Shopping centre in the Western Sydney part of the seat.

21. Tina Rendell-Thornton, @WeAreHughes volunteer, hands out fliers – first time intervention in federal politics.
“I’m a grandmother now & I’m here as much for my grandchildren as me. I’m concerned about climate, it affects us broadly and locally. Time to step up.”
#HughesVotes

22. @WeAreHughes volunteer @eleanor_ruby – love voters’ kitchen table response to the question: What do you consider to be good representation?

“I’m tired of politicians who don’t represent voters. I thought, why not! And it’s good fun!”

23. @WeAreHughes listened to Hughes voters in kitchen table conversations and here’s the result.

24. @drkerrynphelps: “Like most of you I’d never run a campaign before. I didn’t know what a corflute was. You don’t have to be an expert, you just have to care. Door knocks, fliers – people were prepared to do something out of their comfort zone. “