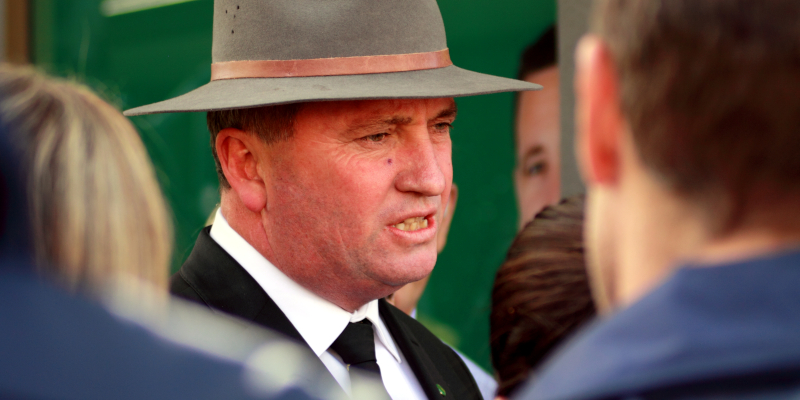 Former Minister for Agriculture and Water Resources Barnaby Joyce has been called to face the public — particularly his constituents in the NSW rural electorate of New England — over a staggering record payment of $79 million for water buy-backs in 2017.

Independent candidate for New England Adam Blakester spoke to No Fibs and said there are growing concerns in the community that Mr Joyce is hiding to avoid scrutiny over the scandal.

To Barnaby I would say he needs to be in public to respond to valid questions about incompetence, conflicted interests and potential corruption of his actions in the last two terms of government.

There are numerous reports Mr Joyce has confirmed attendance at only one or two candidates’ forums, and these will be late in the federal election campaign.

With pre-polling growing in popularity, by the time Mr Joyce does front the public the result could already be decided, Mr Blakester said.

TENTERFIELD chamber of commerce offered three alternative dates to Joyce’s office. Declined all three. Election once every 3 years and this is the best we can expect. Where are you Barnaby ?

In a recorded phone conversation with No Fibs Mr Blakester said:-

They [farmers] know Joyce has thrown the Murray-Darling under the bus.

Mr Blakester told No Fibs of the hundreds of farmers he knows none are supporters of Mr Joyce, and that most of his support is in the two major centres of Tamworth and Armidale.

We’ve got towns and urban areas without water supply, we’ve got farmers on their knees.

Mr Blakester joined calls for an inquiry into the Murray-Darling Basin Plan and said a Royal Commission may be required. Although some New England voters he spoke to were concerned about the financial burden, the overwhelming view in farming communities was an inquiry is needed, according to Mr Blakester.

The ones [farmers] I am speaking with — and I’ve spoken with a couple of dozen in the last few days — they’re outraged and they’re appalled.

This puts evidence to what they know is probably the tip of the iceberg.

Blakester has been holding Indi-style kitchen table conversations with voters which have identified a need for a real-time water monitoring system across the Basin.

There needs to be a million eyes — so to speak — on the Basin, using modern technology in an ‘internet of things’ style to have real-time monitoring of water levels, pumping, dams, off-river storage, soil-moisture levels and water movement through the landscape, as well as the Bureau of Meteorology data that we already have.