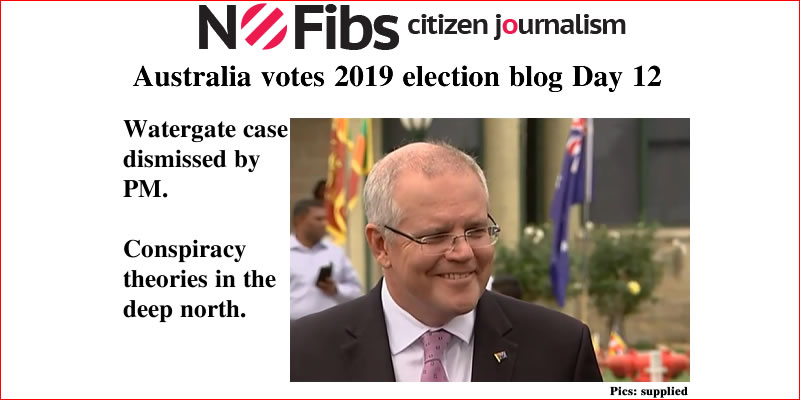 Bob Brown singles out The Courier Mail for disgraceful coverage

Conspiracy theories in the deep north

Bob Brown singles out The Courier Mail for disgraceful coverage

As Bob Brown’s stop Adani convoy rolled into Brisbane, an accusation centering around a social media comment was waiting on The Courier Mail’s front page.

Prime Minister Scott Morrison used the story to attack the Greens and Labor, “The great Australian people are much bigger than them and I expected the Greens to completely denounce those comments and if they don’t, I can’t understand why Bill Shorten could possibly preference the Greens above the Liberal Party.” Scott Morrison lashes ‘keyboard warrior’ anti-Adani protesters over Nazi comments.

However, Mr Brown said he had spoken to the The Courier Mail the previous night to repudiate the comments and advise that they had been taken down from the social media page.

Ben Smee reported, “Brown said the comments on social media “had no place in civil debate” but that they were now being used to tar activists and create hostility.” Bob Brown accuses News Corp of ‘disgraceful’ coverage of Stop Adani convoy.

Wayne Jansson reports, “Former Minister for Health Sussan Ley is under siege in her ultra-safe Liberal seat of Farrer in rural NSW, where Independent candidate Kevin Mack is putting in a strong challenge.” Kevin Mack’s push to pause Basin plan.

Shadow Treasurer Chris Bowen continued to maintain that the documents that were provided to the senate on the issue of water buy-backs were heavily redacted and missing key details.

Margo Kingston and Michael West continued to insist that there were more questions to answer.

Shadow Environment Minister, Tony Burke, has released the letter sent to the Department of Agriculture and Water Resources over their press statement on water purchases.

Barnaby Joyce has also spoke to The Northern Daily Leader to state that everything was conducted at arms length to him.

Jamieson Murphy reported, “On Monday, Mr Joyce told the Leader he followed departmental advice in 2017 when signing off as minister on the negotiations for the water licences from two properties, but had no role in determining either the price or the vendor.” Barnaby Joyce says he was at arms length from $80m water buy back.

Mr Joyce has also spoken to Patricia Karvelas about the water buy-backs. He began by blaming the Queensland Labor government.

“I didn’t want to buy it! It was recommended to me by the Queensland Labor government!” he yelled down a crackly line. Barnaby Joyce questioned over Australia’s ‘watergate scandal’.

Mr Joyce reacted angrily during the interview and appeared to infer he was initially against the water buy-backs. He named a current Queensland Labor minister and former federal ministers in his rant.

However, as Van Badham pointed out, the Office of the Premier of Queensland and Minister for the Arts had previously responded in 2017 to Mrs Kylie Kilroy questioning of the buybacks by saying that the “State Government was not a party” to the negotiations.

Conspiracy theories in the deep north

Never short of controversy, the Queensland political system has produced a new conspiracy theorist in the ranks of the Queensland Liberal National Party. Third on the senate ticket, Gerard Rennick, believes Labor’s plan for early childhood education policy is a conspiracy to maximise government control.

Mr Rennick also believes Australia should arm itself with missiles against China, that the company tax rate should be lowered to 12 per cent with a withholding tax rate of 15pc and closer ties should be forged with Russia as they are “Caucasian” and “part of the West”.

Another Queensland hopeful for the House of Representatives has posted his conspiracy theory over the Notre Dame fire. Pauline Hanson’s One Nation candidate for Fairfax, Paul Henselin, warned, ‘This Country better wake up fast”.

He has also posted negative comments about Labor’s Anne Aly and Senator Penny Wong, accusing them of wanting to impose Sharia Law.

Alice Workman reported, “A One Nation candidate has been caught sharing fake news that claims the Notre Dame cathedral fire is linked to jihadi terrorism and that, if elected, Labor will introduce Islamic law. Paul Henselin, One Nation’s candidate in the seat of Fairfax in Queensland, posted a digitally-altered image of a fake news story to his official campaign page on Wednesday. ” One Nation contender spruiks ‘fake news’ on jihadis and Labor.

ABC journalist Helen Frost went to Victor Harbor in the seat of Mayoto hear from some of the locals where incumbent Rebekha Sharkie is hoping to win her third election.