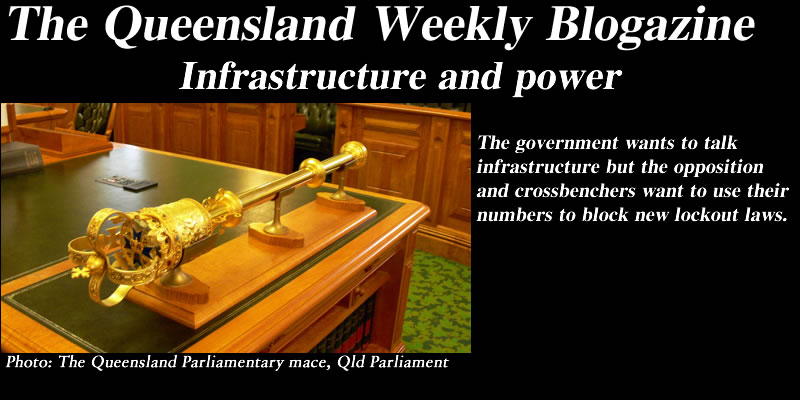 Blog along with us as we cover the week in Queensland politics. 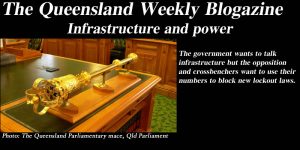 Book sales through the floor

Hey @gavking I’m not sure how 348 book sales constitutes a sold out first order.. Did Hockey do your numbers? pic.twitter.com/YXcC0zntxY 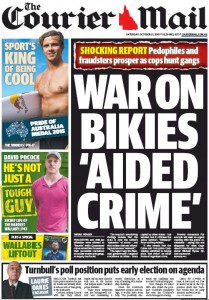 Newman accuses Labor of being dishonest

Peter Doherty reported: Former Premier Campbell Newman has hit back after an inquiry found his governments obsession with bikies, allowed child exploitation and fraud to flourish.

Police resources diverted away from child exploitation and financial crime

#BREAKING bikies only 0.5% of organised crime in Qld says Commission of Inquiry pic.twitter.com/dNT432nKOh

“Frightening news”: Bruce Morcombe comments on the findings of the Byrne Inquiry.

Max Futcher reported: Child exploitation has been allowed to flourish in Queensland while police focus on the war on bikies.

Un-vaccinated can be excluded from childcare centres

Sativex to be legalised

MP for Mt Isa, Rob Katter explains to the House the problem Queensland has with its large regional electorates. (Click to enlarge),

Rob Katter explaining to the House the problem Queensland has with its large regional electorates.

Speaker Peter Wellington’s ruling on the MP for Callide Jeff Seeney referred to the Ethics Committee. (Click to enlarge.) 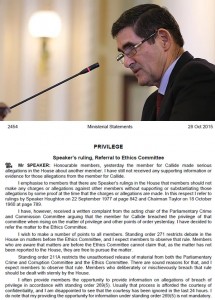 Bob Katter is waiting for you to tell him Bundy isn't rum @heldavidson pic.twitter.com/37YrIrMfQi

'We in the LNP think it's time for a look at a fair redistribution' @IanWalker_MP argues for more Pollies #9News pic.twitter.com/Ujeep2BzoX

Bit of inside baseball stuff for you on Qld Parliament. In Question Time the oppn was pursuing the premier over her COS receiving a..#qldpol

confidential document relating to @JoAnnMillerMP and the PCCC. But it's backfired. The Speaker @pwellingtonmp says it was.. #qldpol

@MattWordsworth with a brief on why Speaker @pwellingtonmp referred 5 LNP MPs to the Ethics Committee. #qldpol pic.twitter.com/O5zEZ6Oos2

At 8:32am, the Member for Callide Jeff Seeney used privilege to inform the House of a phone call with a media operative. (click to enlarge). 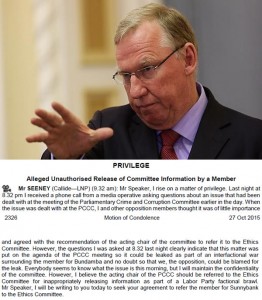 Jeff Seeney used privilege to inform the House of a phone call from a media operative.

Later during question time, there were multiple points of order and an exchange between Speaker Peter Wellington and Jeff Seeney. (click to enlarge).

Speaker Peter Wellington reviewed the morning’s transcript and in consultation with the clerk of parliament referred 5 LNP MPs to the Ethics Committee for breach of standing order 271. 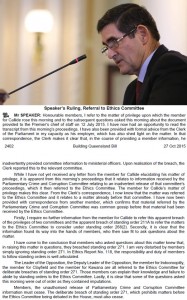 Health Minister to inject $70m into hospital over three years

Politicking aside, the most important thing is to get the Lady Cilento Children’s Hospital fully funded & fully staffed so it can function at one hundred percent capacity. It has never been been at that level of efficiency. 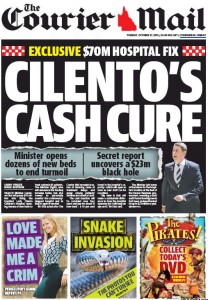 Kim Skubris reported: A 70-million dollar rescue package has been unveiled to bail out the Lady Cilento Children’s Hospital promising more beds, staff and equipment. AMA Queensland is backing the State Government strategy with a message to parents to have confidence in the hospital.

LNP blames everyone for LCCH woes

On LCCH problems, @SpringborgMP says he takes responsibility for not winning the 2009 Qld election. #qldpol pic.twitter.com/BZqUKLeW6a

Premier @AnnastaciaMP full speech to parliament on acceptance of 3,500 refugees from the Syrian conflict. #qldpol pic.twitter.com/m2LJlehf6i

Ghosts of Newman’s VLAD still with us

[email protected] try reading it first before you knock it. Or, release LNP Infrastructure Plan… that's right, you didn't have one #qldpol

Katrina Bowers reports: More problems at the Lady Cilento Children’s hospital have been the focus of crisis talks with doctors warning of potentially fatal consequences.

Journalist Amy Remeikis looks at the seat of power