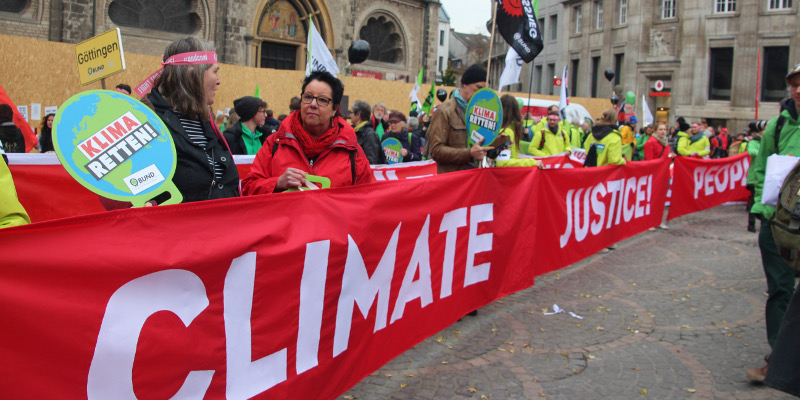 In the immediate vicinity of the latest UN climate change conference COP23 and the largest lignite mining area of Europe, twenty five thousand people demonstrated for the immediate implementation of the Paris Climate Agreement in the city of Bonn, Germany, calling for climate justice and an end to coal.

Just ahead of the 23rd World UN Climate Conference (COP23) a broad alliance of civil society groups made clear that the Paris climate agreement needs to be followed by further action to phase out fossil fuels such as coal.

More than 100 climate, environmental and development organisations, citizen initiatives and churches from all over world supported the march and the call to action.

The regulars were at the march: including young communists from Belgium who were a very vocal and colourful group calling for system change. Die Grunen, Greenpeace, and Friends of the Earth were also there in abundance. I saw a banner for Germanwatch NGO (they do some powerful climate policy research and writing much in English) But there were also thousands of ordinary folk from Bonn and further afield who came to say it’s long past time for action on climate change.

Somewhere between 800 and 1000 people participated in a cycling critical mass to attend the protest. I spoke to a person, originally from Manchester but currently living in Belgium, who had cycled to the event.

Though predominantly German and European, it had a fair share of internationals like myself attending, and speeches from the stage were in Deutsch and English. There were some powerful speakers in both languages.

Marshallese poet Kathy Jetnil-Kijiner recited one of her famous poems from the stage at the end rally. There were also activists with a soup kitchen feeding people hot food.

The Climate March sends a strong signal to the world’s leaders to take rapid action on fossil fuels and to step out of coal.