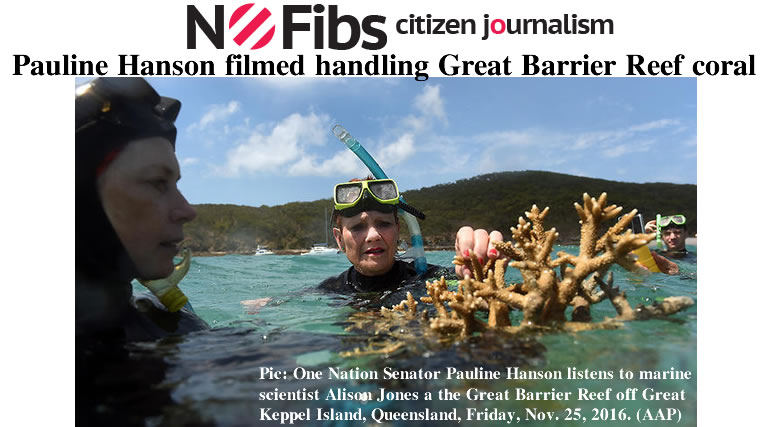 One Nation Senator Pauline Hanson has been filmed handling coral on a visit to the Great Barrier Reef. 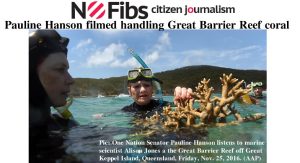 Use the table of contents menu to jump to relevant sections.

(November 29, 2016) – Professor Terry Hughes with updates on the reef condition.

Queensland Senator Pauline Hanson has been filmed with a “coral expert” Alison Jones handling Great Barrier Reef coral on a trip to Yeppoon on the southern Great Barrier Reef. The dive was organised to dispel the findings of scientists who say coral bleaching is occurring due to high sea surface temperatures brought about by global warming and an El Nino weather event.

One nation chartered Freedom Fast Cats for the tour. Skipper of the vessel, Max Allen Jr, identified the dive location as Monkey’s Bay, which is out from the company’s base at Rosslyn Bay Harbour, Yeppoon.

“Today we will be going to Monkey’s Bay, also the reef edge, one of their largest, and also one of the strong corals,” he said.

After a frolick in snorkeling gear and wetsuits, both One Nation senators Pauline Hanson and Malcolm Roberts declared the Great Barrier Reef alive and well.

“If you actually go deeper from twelve to twenty metres deeper into the ocean then you have the reefs there – they’re in pristine condition and they’re growing all the time,” Senator Hanson told the media.

“We can’t have these lies put across and by people with their own agendas.”

“We are being controlled by the UN and these agreements that have been done for people’s self-interest.”

“The reef is flourishing. A bleaching event is due to temporary, extremes in weather and they’re entirely natural,” he said.

Today @OneNationAus is checking on health of the #GBR. The reef is alive & well and we need you to tell the world to come visit #Queensland pic.twitter.com/mwMTOQXIX7

He also declared the entire reef “open for business” based on One Nation’s tour of the one location.

60% of the reef we visited had suffered bleaching and has now full recovered. Let's tell the world that the #GBR is open for business. pic.twitter.com/29ZAR8zgTP

However, when the group was probed further about the claims by Nine News journalist Ebony Cavallaro, a woman later identified as “coral expert” Alison Jones, admitted that she had “no scientific evidence” to support the One Nation’s assessment that the reef was not dying.

Senator Roberts later labeled the media’s coverage of their visit as “disgusting”.

Media coverage of visit to #GBR today was disgusting

Inconvenient truth was scientists who accompanied us rejected alarmist predictions

One Nation have been lampooned for diving thousands of kilometres from the troubled coral bleaching zone north of Port Douglas.

Professor of Biology and Climate Council’s Lesley Hughes said she would be happy to take the One Nation senators to the troubled northern sector.

“We invite the One Nation senators to come with us, and other marine scientists, to where the coral bleaching has actually occurred. They would see the devastating impacts with their own eyes,” she offered.

“If One Nation is worried about the Reef they are visiting the wrong spot. They are 1000km away from where the action is.”

“The trip is like taking journalists reporting on a conflict to a five-star holiday resort miles away from the actual war zone,” she added.

As far back as April, 2016, Professor Terry Hughes from the ARC Centre of Excellence for Coral Reef Studies has been publishing detailed data on the impact of the coral bleaching event. He divides the problem into three  main sectors in the following graphic. The zone visited by One Nation would only have suffered a 1 percent severe bleaching as opposed to the northern sector where it is 81 percent.

I showed the results of aerial surveys of #bleaching on the #GreatBarrierReef to my students, And then we wept. pic.twitter.com/bry5cMmzdn

Scientists monitoring the spawning rate of bleached corals like Professor Andrew Baird from James Cook University say it is a question now of how the reef recovers.

“The question will be how quickly it comes back and given that there are so few corals left to breed that might well affect the rates of recovery,” he said.

“You would expect rates of fertilisation to be lower just because there’s much fewer colonies.”

Professor Terry Hughes also noted that during the dive coral was brought up to the surface and handled by the group.

It is illegal to rip up a coral from the #GreatBarrierReef Marine Park and expose it to air pic.twitter.com/c1sn6OnF4W

On its website, Great Barrier Reef Marine Park Authority states that permits must be granted before collecting any specimens.

“You must not damage, collect or otherwise take coral, including dead coral, and protected shell species (that is giant triton shell, helmet shell, giant clam) in the Great Barrier Reef Marine Park unless you have a Marine Parks permit.” More can be read here.

Penalties for harming the Great Barrier Reef were upgraded in 2014 by the Newman Government. 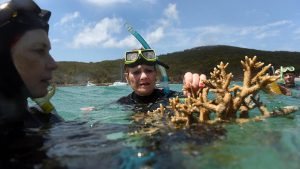 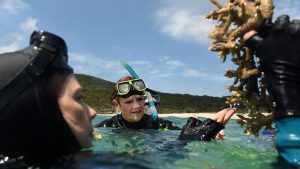 NoFibs has contacted One Nation Senator Pauline Hanson for comment.

NoFibs has lodged an incident report with the Great Barrier Reef Marine Park Authority for analysis and comment.

I have lodged an incident report on Pauline Hanson interfering with coral on the Great Barrier Reef. #qldpol #auspol pic.twitter.com/shPbptgmCN 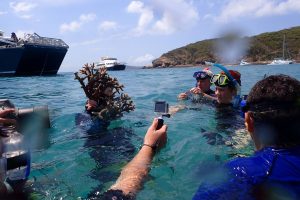 Associate editor of Mashable, Ariel Bogle, also contacted Alison Jones who was also filmed with the coral and claimed she had a permit.

“Alison Jones, who escorted Hanson on the trip, told Mashable the reef she handled was already “broken off.” Jones claimed she had the necessary permits for the dive,” it was reported.

NoFibs has also requested a review of the ABC 730  program which screened nationally on Friday night.

The screening of ABC 730 “One Nation attempts show of unity at Great Barrier Reef” by Peter McCutcheon did not show any alternative views to the claims made by the participants of the program. No scientists working on the coral bleaching problem were interviewed for their opinion on the claims made. Comments from One Nation media advisor James Ashby screened during the program indicate that the media event had been planned well ahead of time.

In the interests of transparency, comment should have been sought from alternative sources before the program was screened to a national audience.

Some respite for the #GreatBarrierReef – normal sea temperatures forecast by #BOM pic.twitter.com/jh4NbS55VU

A spokesperson from the Great Barrier Reef Marine Park Authority said it believes one of the parties did hold a permit but was reviewing the conditions.

“We understand one of the parties involved has an existing research permit, which outlines conditions for coral collecting, including species, size, location and equipment.

We are seeking further information on the activities — and reviewing the conditions of the permit — to determine what follow up action, if any, is required.”

(November 29, 2016) – Professor Terry Hughes with updates on the reef condition

Professor Terry Hughes, Britta Schaffelke and James Kerry have published a piece in The Conversation regarding their assessment of coral deaths in 2016, “How much coral has died in the Great Barrier Reef’s worst bleaching event?”

Thanks to our colleagues @GBRMPA and @AIMS for pulling together to produce this map. @jcu @CoralCoE pic.twitter.com/i8iwcwVVLE

Queensland television networks, 9 News Brisbane and Ten News Queensland,  have covered the investigation into Pauline Hanson’s interference with coral in their nightly reports.

In a statement, ABC Corporate Affairs told NoFibs that there was no imbalance in the presentation of their coverage of Pauline Hanson visiting the non-coral bleached area of the Great Barrier Reef because they consider coverage of the problem over the life of 7.30.

“7.30 has presented comprehensive coverage of climate change and related issues, such as the bleaching of the Great Barrier Reef, over a very extensive period of time. No news or current affairs program in Australia has come close to the vast breadth of coverage the program has presented, and continues to present, on climate issues on a newsworthy basis over time. The program has presented the informed perspectives of a very broad range of scientists, policy makers, environmentalists over time, making it unmistakably clear to the program’s audience that climate change is very real, poses a significant threat to humanity and that the Great Barrier Reef is under an existential threat from coral bleaching,” it said.

“This approach to achieving balanced coverage, over time, is in keeping with the following relevant ABC editorial standard for impartiality, which states –

4.2 Present a diversity of perspectives so that, over time, no significant strand of thought or belief within the community is knowingly excluded or disproportionately represented.

There was no editorial requirement, within the context of this report, to present a scientist to counter the comments of Senator Roberts, who’s views on climate change have already been examined in detail on 7.30 and were subject to criticism and ridicule. We are satisfied the 7.30 audience would have readily understood that Senator Roberts’ views are in the extreme margins of any serious discussion on climate change and are taken seriously by almost nobody. The program is not required to present the views of a reputable scientist every time an eccentric politician makes an unsubstantiated claim.

One Nation is a political party which has the potential to influence important legislation in the Australian Parliament that could impact the country. The views, motivations and actions of One Nation members is therefore considered highly newsworthy and a matter of significant public interest worthy of coverage by a national current affairs program.

Having reviewed the broadcast, we are satisfied it is in keeping with the recognised standards of objective journalism set out in the Corporation’s Code of Practice.”

The full statement can be read here: 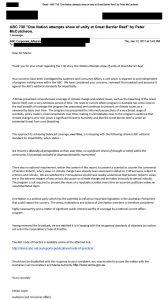 Fairfax journalist Adam Gartrell has revealed that Pauline Hanson and her companions received a gifted cruise to Yeppoon from Freedom Fast Cats but failed to declare it. Initially, she told the paper that there was no need to declare the cruise as it was under the $300 threshold. When Mr Gartrell followed up with Freedom Fast Cats, he found that it was worth $4,500.

“Now Fairfax Media can reveal that the cruise was actually an expensive gift that Senator Hanson failed to declare, potentially putting her in breach of parliamentary rules and at risk of being found in contempt of the Senate,” he writes.

“Parliamentary records show that all three One Nation politicians charged taxpayers for a return flight to Rockhampton – which was within their travel entitlements – and Senator Hanson and Mr Roberts also claimed travel allowance. But none of them used their charter entitlements to pay for the cruise.”