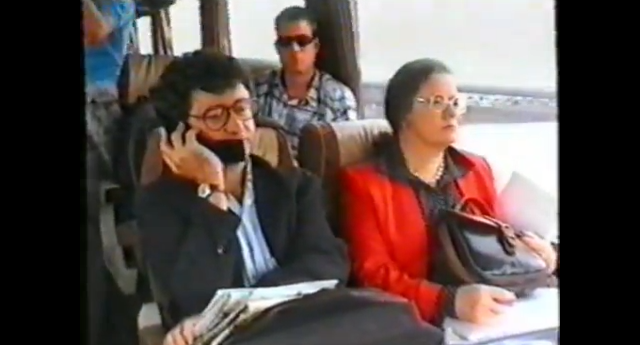 Tom Burton and Michelle Grattan on the Press Bus

AS AUSTRALIA gears up for another federal election, I let my mind return to the 1996 election campaign bus.

The caught-in-a-trap feeling returns, as does the strength of my determination when it was over to never, ever get on another election campaign media bus.

Little wonder that the public has come to distrust us, the media, as much as the politicians

We had great big mobile phones then, and no laptops. As the Sydney Morning Herald’s person on the Paul Keating and John Howard circus for a week each, I’d phone in stories to the copy takers, converting scribbled notes to news or colour stories on the fly.

I relied on calls from head office or the reporter on the other bus, to find out what was happening outside my bubble.

Oh, and I was followed by a video camera held by Andy Nehl or Liz Jakubowski, who were making a documentary watching the watchers.

The result was Media Rules which laid bare the impotence of the press gallery and emptiness of our role. The nature of the bus bubble hasn’t changed much over the years, from what I’ve read, and the old media has done little or nothing to disrupt its rules.

Media companies supplied the names and the money and the political parties arranged transport, accommodation.

You didn’t know where you’d go until a note passed under your hotel door each morning, or what policy you’d report until a document was thrust into your hands moments before a picture-perfect announcement.

You may or may not have a chance to ask questions.

“…There seems to be much more pressure on the media from the candidate’s officers not to do the shots they don’t want, not to get them at angles they don’t think are flattering, not to ask questions they don’t want to answer. So it does seem to be quite different.”

And yet how could you blame the parties? The media were wholly complicit in their stage management, yet kept an eagle eye for the stumble to blow it up at the expense of news.

[Then PM John] Howard stumbled on the way to a podium, and that was the news

Late in the campaign, Howard stumbled on the way to a podium, and that was the news.

Most members of the bus pack were juniors providing vision, audio and words to the senior people back in Canberra to shape and construct into the day’s narrative.

A lucky few, including me, could actually report what we saw and heard.

A few of us had a go at exposing the great big lie of the campaign perpetuated by Howard and Keating because it was in both their interests to do so – that there was no deep budget black hole.

Yet we too had no idea about the real world ‘backdrop’ to our stories.

Oh yes, there were us Sydney Morning Herald political journos sneering at Pauline Hanson over coffee, arrogant in our bubble, ready to be shocked at her election to Parliament.

We knew nothing, but we thought we knew it all. I realised this truth when I followed Hanson’s 1998 campaign to win the seat of Blair.

No campaign bus there – we organised our own travel and place to sleep. We chased her by car and even plane when she wanted to escape us, and a Daily Telegraph reporter and I even slept at Hanson’s home when we realised that where she lived taxis didn’t operate 24 hours a day.

In Off the Rails: The Pauline Hanson Trip (Allen & Unwin, 1999), I summarised my opinion of the 1996 campaign bus thus: “Any honest look at the disillusion in the Australian political landscape has to face up to the media’s complicity — inadvertent and otherwise — in the gamesmanship of the electoral process.

“The leaders and journalists are actors in a play, bound by intricate codes of etiquette and self-interest. We pick their spin, they pick ours, and both sides look only at each other, as journalists present our theatre reviews to an ever more disconnected public. Little wonder that the public has come to distrust us, the media, as much as the politicians.”

I have a feeling that this time, at last, it may be different. Social media has a chance to disrupt the empty play and allow real people in. Good luck, people.