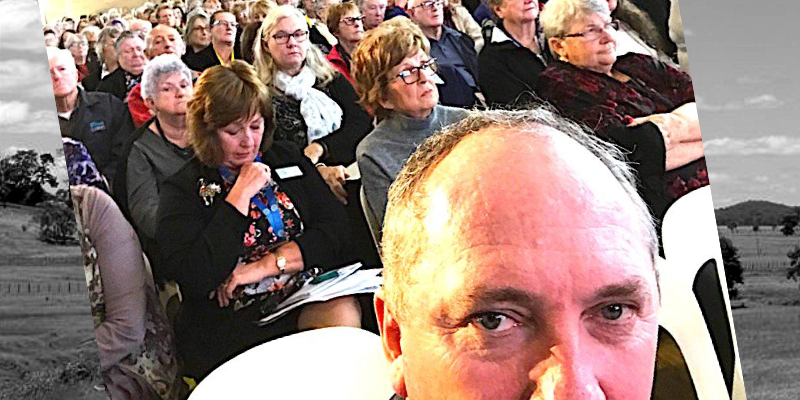 Robyn's father was born at Uralla in 1914. His family lived there until his parents moved to Tamworth in the 1920s. "I have lived in many different locations around Australia and overseas," she says. "My somewhat nomadic life has seen me living in large cosmopolitan cities both in Australia and overseas, as well as small rural towns of less than 30 people. In 2017, my husband and I decided to move 'home' and have settled at Tamworth. Twitter is a passion and one of the best sources for unbiased news and information. As we approach the upcoming federal election, I find myself reflecting on the New England by-election, politicians in general and the media."

During a speech to mark International Women’s Day (IWD) 2019, Scott Morrison suggested that womens’ advancement should not come at the expense of men. For the Prime Minister to be openly saying this points to significant obstacles for womens’ voices being heard in this country, not only in parliament but at the ballot box.

Australian politics has traditionally been a male domain. In 1996, the Liberal Party was elected with a record number of female parliamentarians. In 1994, the Labor Party made a decision to introduce quotas for female MPs, starting with 30 per cent. In 2019, Labor has 44 females out of a total of 95 parliamentarians, or just under 50pc.

Some would find the Liberal Party numbers surprising given that in 2017 there were 12.4 million females, or just over 50pc of the Australian population. Non-Aboriginal and Torres Strait Islander Australian women have had the right to stand for parliament since 1923. However, in 2019, the overall number of female parliamentarians in Australia is still below 50pc.

What is behind the lack of representation? Some would argue that it’s difficult to juggle motherhood and politics; other blame the combative and occasionally nasty nature of politics. Neither of these factors are any different to what women experience in the business and other arenas, where data on womens’ participation reveals far more equal representation.

So is there an element of male chauvinism and misogyny within politics, and does it impact how women vote?

Male chauvinism (noun) male prejudice against women; the belief that men are superior in terms of ability, intelligence.

The term male chauvinism isn’t new, it’s been used for decades. According to Wikipedia the first documented use of the phrase ‘male chauvinism’ was in the 1935 Clifford Odets play Till the Day I Die. However, it emerged during the 1960s with feminist movement.

According to an article by Mel Konner MD, PhD: “Call it sexism, male chauvinism, or any other name, it adds up to the same thing: ideologies and methods for controlling, restricting, suppressing, denigrating, and when necessary physically harming women so that men can be in charge of their reproductive capacities, limit them mainly to reproductive and other subservient roles, and avoid competing with them in an open market of human effort, talent, and skill.”

Misogyny (noun) dislike of, contempt for, or ingrained prejudice against women.

According to an article from Industrial Psychiatry Journal “…misogyny has taken shape in multiple forms such as male privilege, patriarchy, gender discrimination, sexual harassment, belittling of women, violence against women, and sexual objectification.”

While the word misogyny isn’t new, it was famously highlighted by Julia Gillard in her 2012 ‘misogyny speech’. Australian politics hasn’t improved since 2012, it continues to be male-dominated, moreso in conservative parties with women under-represented in both the Liberal Party and National Party.

Male chauvinism and misogyny aren’t confined to political parties, there are many male-dominated industries; but parliament is a ‘fish bowl’ and allows people to observe male politician’s behaviour towards females.

After the 2017 New England by-election, Barnaby Joyce was forced to confirm that he’d had an affair and his girlfriend was pregnant. Since then it has been widely reported that Joyce admitted he spent years in Canberra “wandering and getting closer to other women”.

In February, 2018 Catherine Marriott, rural advocate, 2012 WA Rural Woman of the Year and businesswoman, lodged a confidential sexual harassment complaint against the then Nationals leader Barnaby Joyce. Within days, details of the complaint and Catherine’s name were released. After an eight-month investigation the Nationals were unable to make a finding on the claim.

In September, 2018 under parliamentary privilege, Ann Sudmalis accused a NSW MP of “bullying, betrayal and backstabbing”. When she announced she was leaving politics and wouldn’t re-contest the seat of Gilmore, she blamed branch stacking and unethical behaviour by Liberal colleagues. Julia Banks quit the Liberal Party due to the “appalling” behaviour in the federal parliament including bullying, intimidation and harassment.

People often associate the Country Women’s Association (CWA) with tea and scones but the organisation does more than swap recipes. The CWA is a non-sectarian, non-party-political and not-for-profit association that aims to improve conditions for country women and children. Since it was first formed in 1929 it has maintained a conservative approach with ethical and moral standards.

Some were surprised when the CWA publicly criticised misogynistic behaviour in federal politics. CWA president Tanya Cameron was reported as saying: “Most of our members are very disappointed”.

“As president of a long-standing organisation that has maintained its credibility because of its conservative approach and ethical and moral standards, we are quite appalled at some of the behaviour within politics.”

The track record of conservative parties and parliamentarians in recent years around the misogynist approach to women is frustrating, and it’s hard to gauge how it will impact at the ballot in key rural seats.

But there is a significant trust issue felt in these communities.

In January, 2019 a report was released on research undertaken by James Cook University PhD candidate, Raphaella Kathryn Crosby into voter sentiments in her home electorate of New England.

That research found: “…many [people] didn’t care about the [Barnaby Joyce] affair, what they didn’t like was the cover up, or issues around misuse of power and entitlements.”

We have seen a conservative organisation like the CWA express its displeasure with level of misogyny within Australian politics. Voters have lost trust in Barnaby Joyce due to the coverup of his affair. They’re also frustrated with the National Party over how Barnaby Joyce’s affair and sexual harassment claims were handled.

There needs to be a change so that misogyny is removed from Australian politics. We need politicians who are trustworthy, who respect all Australians, both male and female.

That is why I am supporting Adam Blakester, the Independent candidate for New England.