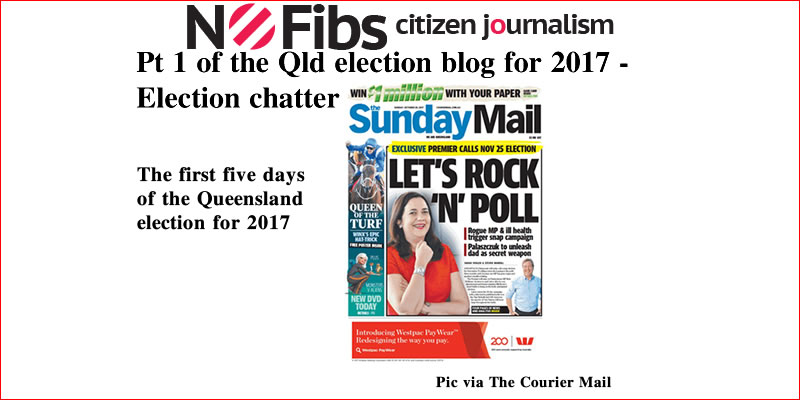 Ongoing coverage of the Queensland election campaign for 2017. 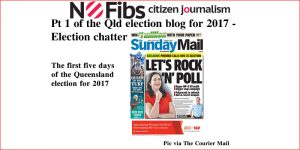 Get to the chopper

.@TimNichollsMP has just touched down in a chopper to make an announcement about tackling crime in North Queensland #qldvotes #qldpol pic.twitter.com/WscApGAy6I

Once off the helicopter @TimNichollsMP announced $10M over four years to launch a police helicopter for North QLD, based in Townsville.

Tim Nicholls has announced a policy whereby children would need to be home by 10pm. This policy gained some momentum in 2013 under the Newman Government but ultimately disappeared off the radar. October 8, 2013 – Anti-crime group keen for youth curfew commitment.

We have lift off! The LNP Campaign finally flying the coup & heading to Nth Qld. We're off to Townsville to announce a plan to lock-up kids! pic.twitter.com/nKKdf65bSH

On the #qldvotes bus in Townsville. No smart comments please. @abcnews #qldpol pic.twitter.com/lf33zoozuC

Two tracks for the Sunshine Coast

Robert Dow has corrected me on my Tweet regarding the Sunshine Coast dual tracks promises.

The Premier's campaign has moved to Rockhampton on day four #qldvotes pic.twitter.com/pBBUUag7Au

He's gunning for the state's top job but if @TimNichollsMP isn't successful he's got career options..learning to flip burgers on Sunny Coast pic.twitter.com/3E0M6FYz9h

The Greens will stop Adani by 1) Vetoing the $1bn loan to Adani under the federal NAIF Act, 2) Scraping the $300m State based royalty tax break, 3) Cancel Adani's license to operate in Qld based on their shocking OS track record under Qld law 1/2

Annastacia extends Back To Work program

In 2012, the Skilling Queenslanders for Work program was axed by the Newman Government.  Premier Palaszczuk has restored it, renaming to ‘Back To Work’ and now announcing she’ll extend it into 2021.

“When you drill down, there’s nothing much in Labor policies,” boom tish @TimNichollsMP @abcnews #qldvotes #qldpol pic.twitter.com/Xf2h5NRzWA

Halloween theme at QCU campaign launch claiming an LNP One Nation coalition would be a horror show @ABCNewsBrisbane pic.twitter.com/VwtwZ3vSla

One William, one bus, and we’re off on Day 3 #qldvotes Day 3. @abcnews #qldpol pic.twitter.com/cUbJPR80Ld

“On the buses”. Issues with sourcing aircraft means the LNP leader is forced to focus on the south east. He assures the regions, he’ll get there. @7NewsBrisbane pic.twitter.com/df4lcBeYGr

Going for a walk is a pretty popular event for political leaders during election campaign. Former Queensland Premier Newman chose to run, he was that sort of guy. It’s good for photo opportunities and it doesn’t cost the campaign too much in finances. There’s always the risk of running into an Adani protester though.

#qldvotes JJ Richards & Sons may pick up your rubbish. They support the LNP with $34,429 in donations. More at https://t.co/W5ygCqRZDF pic.twitter.com/XJRoOhMJbg

Karl Stefanovic accuses Annastacia of lying to him

Labor’s incumbent for Pumicestone Rick Williams has had a troubled term. There are 37 complaints against him regarding verbal altercations. The latest was with a local journalist who said she feared for her life. The incident prompted Premier Palaszczuk to disendorse him as the candidate for the seat. Williams said he would resign from the Labor Party and run as an independent. He claims to have a recording of the incident.

Williams said he would not support Tim Nicholls for premier but the situation would have reduced Palaszczuk’s numbers on the floor of parliament to 41, matching the LNP’s 41. Williams would have moved to the cross-bench with two other independents (former Labor members), the two Katter’s Australia Party MPs and a One Nation MP (former LNP member). Speaker Peter Wellington did have a casting vote giving Labor the edge at 42 votes but chasing up the crossbench for support on legislation would have been difficult. Premier Palaszczuk decided to call the election instead.

I didn't know if I was going to tackled @AnnastaciaMP on Adani protestor #qldpol @9NewsQueensland pic.twitter.com/wjQJ7Skcqg

"Adani protests are part of the hurly burly of #qldvotes. Labor should take it on the chin," says @TimNichollsMP @abcnews #qldpol pic.twitter.com/9mU2HNCvpz

Prem @AnnastaciaMP concerned she was going to be tackled during an anti-Adani protest during live TV. Calls for respect. @tennewsqld pic.twitter.com/TehIm0wnyt

Let's not have a "fear and smear and no idea" campaign, says @TimNichollsMP @abcnews #qldpol #qldvotes pic.twitter.com/XWgNXBKzL7

Campaigning for Queensland's state election is already well underway. Here's why @AnnastaciaMP wants Queenslanders to give her a majority. pic.twitter.com/lzGo1wKlj8

Changes to the electorate

Update your details, enrol to vote

Details on enrolling to vote or updating your details can be found at the ECQ 2017 State General Election website.

How would the NAIF loan be vetoed and Adani stopped?

An issue swirling in the Queensland election maelstrom is the notion that the Queensland Government can veto the Federal Government’s Northern Australia Infrastructure Facility (NAIF) loan to Adani to build a railway to the Carmichael coal mine. The Greens have latched onto this as a key election issue. The states have a constitutional order to administer loans from the federal government. However, by what specific mechanism could the loan be stopped?

I don't think so. It's a federal fund. State govt is committed to Adani isn't it? It would lose Townsville seats if it changes its mind

Can't constitutionally stop the feds. It could revoke the go-ahead of course: but that would contradict its desire for mine ti proceed.

A lot of people have entrusted the Greens to veto the NAIF loan & stop Adani. How specifically would this be achieved? #qldvotes https://t.co/1W2JzIYyel

Tim Nicholls has ruled out asset sales. However at the last election, the LNP also ruled that out. The 2015 election asked Queenslanders to decide on ‘asset leasing’.

Tim Nicholls has avoided the question over voluntary redundancies in the Queensland public service.

In February 2012 ahead of the March Queensland election, Campbell Newman promised there would be no forced redundancies in the Queensland public service.

Anti-Adani & LNP campaigners jostling to get in shot for @JohannaMarie_ cross. Don’t even try it with me. 🙅 #qldpol @tennewsqld pic.twitter.com/cVLVjMxzTt

Landed in Proserpine tonight. Day one of the campaign trail. #qldvotes pic.twitter.com/zmWmBDLFm2

7 News at 6pm: The Premier's first stop on the election campaign will be in regional Queensland. @PatrickCondren #qldvotes #qldpol #7News pic.twitter.com/6AGbmH9AOG

This morning the Acting Governor, advised by Executive Council, issued writ for election of 93 Members of Qld Parliament for 25 November '17 pic.twitter.com/vBEtEuBWXF

The Qld State Election will be held on 25 November 2017.
Make sure you're enrolled to vote https://t.co/kHYE0Ej6Tn

Campbell Newman says Tim Nicholls can't win govt without ON support. A vote for LNP is a vote for Hanson #qldpol https://t.co/B7uLFDpiZA

Always happy to be proven wrong. 4 weeks to do so #qldvotes #qldpol https://t.co/EMewbIo6di

Former Qld Premier @CampbellNewman says he has no doubt that One Nation will win 5-10 seats in the Qld election https://t.co/3MSlVDAVkY pic.twitter.com/AZl2V71Cov

We will deliver a campaign of optimism & hope. Our plan will create jobs, act on cost of living & build the roads, bridges & dams we need pic.twitter.com/41NDu0QzNV

.@TimNichollsMP: 'Let me be clear. We will not sell assets & there will be no forced redundancies in public service' https://t.co/p3rIhPlEB7 pic.twitter.com/6fQIlIQi94

"There will be no deal with One Nation. No Coalition and no shared Ministry" says @TimNichollsMP #qldvotes @abcbrisbane

I want to Build a Better Queensland for you and your family. #BetterQld #qldpol #qldvotes pic.twitter.com/f3NZQggpXR

Opposition Leader Tim Nicholls faces a challenge for the seat of Clayfield from Labor’s Philip Anthony.

Greens aiming for balance of power

Federal MP Adam Bandt questioned the Prime Minister Malcolm Turnbull last week over Adani and indicated that the Greens are looking to hold the balance of power with three crossbench seats in South-East Queensland.

One Nation aiming for balance of power

The Premier has arrived at a bowls club in Darra #qldpol pic.twitter.com/CyzACx0dmM

Down through the gears, the big Holden crackling and snarling as @AnnastaciaMP takes the last apex into Fernberg… #qldpol #qldvotes pic.twitter.com/0wNWp5YSgE

I’m on my way to Government House, to ask Queenslanders to renew their trust in government. Queensland’s best days are ahead of us. pic.twitter.com/dw8o1YpDkN

With His Excellency the Honourable Paul de Jersey traveling to Singapore & Israel, the Acting Governor is the Honourable Chief Justice Catherine Holmes.

Great to meet Commonwealth Alliance of Youth Entrepreneurs in Singapore, look forward to welcoming a delegation to #Qld during @GC2018 pic.twitter.com/tyypknxfCQ

His Excellency was also absent in 2015 when former Queensland Premier Campbell Newman called a snap election in January, 2015.

Anti-Adani & LNP campaigners jostling to get in shot for @JohannaMarie_ cross. Don’t even try it with me. 🙅 #qldpol @tennewsqld pic.twitter.com/cVLVjMxzTt

As promised on Friday, I’ve dropped in to visit my Nanna – she’s very important to me! Happy Grandparent’s Day to all QLD grandparents. pic.twitter.com/NaVwxXz6mj

One Nation not on same page

Pauline Hanson has taken to Twitter to complain about the election call while she is out of the country. However Malcolm Roberts, who is running for the seat of Ipswich, yesterday demanded Annastacia Palaszczuk call the election.

The Courier Mail has “confirmed” the election date.