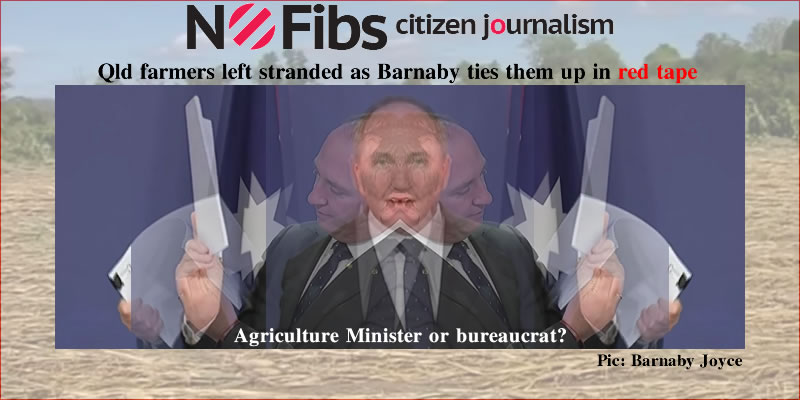 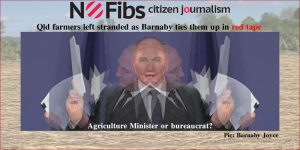 Fresh from the debacle over the Shoalwater Bay defence base expansion, Agriculture Minister Barnaby Joyce has again raised the ire of Queensland farmers. Waving papers wildly in the air at a press conference, he lambasted the Queensland Government for not ticking all the boxes to secure class ‘C’ disaster funding in the wake of Tropical Cyclone Debbie. Like a school teacher assessing his students, the Acting Prime Minister fanned through the forty-five page document from NSW Premier Gladys Berejiklian for the cameras. A moment later, he thumbed his nose at a two page letter from Queensland Premier Annastacia Palaszczuk.

“Imagine how we’d go with the Auditor-General, they’d say but what you’d based that on (sic)? So, oh well, we got a letter said (sic), ‘Dear Barnaby’,” he voiced in high pitched tones.

With Prime Minister Malcolm Turnbull overseas, Mr Joyce sat up front on a tinnie and had Rockhampton locals take him on a tour of the flood zone.

On Thursday, Mr Joyce rubbed further salt into the wound by boasting on Twitter and Facebook that NSW had received funding while documents from Queensland were ‘completely insufficient’.

We signed off on the NSW application for disaster relief funding within 34 hours, and there will be staff on… https://t.co/fVlPYSrSWI

However, Queensland Premier Palaszczuk said she was responding to a Joyce commitment made in the flood fields to fast track funding.

“Barnaby Joyce said that he wanted me to write to him to cut the red tape to get the money out the door. I’ve done that,” she said, standing in the flattened corn fields of the Scenic Rim.

“I can not underestimate, or overstate perhaps, how hard this has hit parts of our region and parts of Queensland.”

“He’s acting like a child on this matter,” she said.

What we need is for them to assess the information we put forward, to recognise in the first instance that primary producers and many small businesses in the disaster affected areas have been significantly impacted.

That was the purpose of the letter from the Premier to the Prime Minister. Number one, acknowledge it.

Queensland is doing the work and we will be submitting the comprehensive business case and application form required in order to allow all of these disaster-affected primary producers, not-for-profit and small business operators to access grants.

I stand ready to accept your support @MichaelKeenanMP All you need to do is activate Category C. https://t.co/0o6y9GLu8o https://t.co/VjvGOoqIuh

In 2016, Mr Keenan denied Queensland more than a billion dollars in disaster relief after Tropical Cyclone Marcia, choosing instead to score political points against Labor.

The Australian Government will always have a role in supporting those affected by natural disasters—we stand ready to assist Australian communities in need. We always have and always will.
That’s why last year we listened to the concerns of local communities and local governments and extended ‘day labour’ arrangements to councils in QLD to enable them to be reimbursed for reconstruction works undertaken by their own employees (where they can demonstrate this is at a lower costs than contracting out).
Since 2011, $7.9 billion has been provided to QLD by the Commonwealth to assist in recovery from its natural disasters.
The NDRRA recovery money is still Budgeted for; we have placed the funds over the next two financial years to ensure the funds are still available to QLD—but we need to ensure the claims are eligible before they can be reimbursed.
That’s because the framework we inherited from Labor was a disaster—both the Productivity Commission and ANAO released reports critical of Labor’s framework and highlighting systemic issues where ineligible payments were made.
Queensland’s own Audit Office found that over $115 million ineligible claims were paid against the QLD Governments 2009-2012 NDRRA claims.
Labor has no respect for taxpayer’s dollars—it’s all part of their higher taxing, higher spending, debt and deficit agenda, which will stop our nation’s transition to the new economy dead in its tracks.
Our plans are fully costed, and fully funded—and QLD’s NDRRA funding is no exception.