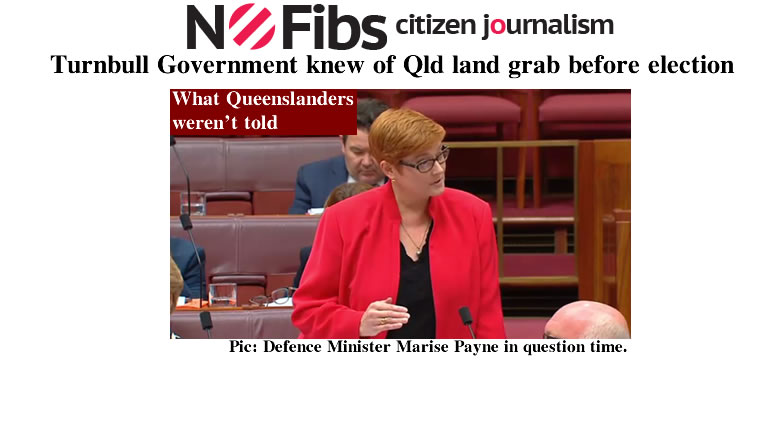 The Singapore deal to acquire land around the existing defence bases at Shoalwater Bay & Townsville may have been kept from Queensland voters at the 2016 federal election. 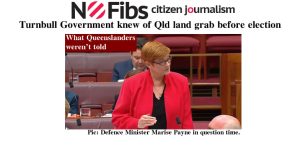 Federal Defence Minister Marise Payne has admitted in the Senate she knew of the Shoalwater Bay defence force base expansion in Queensland before the federal election in 2016. Ms Payne informed the Senate on Monday that she had been ‘preliminarily advised  in June’ of that year.

Expansion of the defence bases at Shoalwater Bay and Townsville to accommodate visiting Singapore defence forces reached peak anxiety this month. More than sixty generational landholders had been sent letters late last year by the Department of Defence informing them of compulsory acquisitions.

The issue forced Deputy Prime Minister Barnaby Joyce to fly to the region to speak to graziers but he did little to allay their fears. During an ABC radio interview on the morning of Friday, February 3, 2017, Mr Joyce appeared to dismiss claims that there would be any forced acquisitions.

However, Prime Minister Malcolm Turnbull later gazumped him in on a rival radio station by stating that compulsory acquisitions would only be a ‘last resort’.

Arriving that afternoon in central Queensland, Mr Joyce changed position saying that the government preferred acquisitions to be between willing sellers and willing buyers. He told graziers that hoped to be able to convince colleagues to call off the plan.

The division prompted exasperation from Queensland Premier Annastacia Palaszczuk. Having just returned herself from speaking to locals she accused the federal government of not knowing where the proposal was at.

“The federal government does not know from one day to one week what’s going on,” she said.

By the following Wednesday, the Coalition had called off the land grab sending a wave of relief throughout Central Queensland. Local federal MPs Michelle Landry for Capricornia and Flynn’s Ken O’Dowd joined Mr Joyce before the cameras. Both had narrowly retained their seats against a swing at the 2016 election by 1,111 votes and 1,814 respectively. Mr Joyce sung the praises of the Defence Minister who he said should be ‘commended for listening’ to the people.

However on Monday, Queensland Labor Senator Murray Watt used senate question time to ask Ms Paye when she was first informed of the Singapore plan. Ms Payne attempted to brush off the question and run down the clock by labeling the question “puerile local politics” and an attack by Labor on “national security”.

“I was preliminarily advised about the potential requirements for training area expansion in June 2016. That goes to all aspect of the processes under the Land Acquisitions  Act,” she finally confessed.

Having narrowly won Capricornia, Professor Clive Bean from the Queensland University of Technology suggested to journalist Kerri-Anne Mesner from The Morning Bulletin that Ms Landry would not have retained the seat for the Liberal National Party.

“He said generally local issues don’t play a huge role in voting behaviours, but something as big as the $2.25 billion deal with Singapore to expand Queensland military training bases at Shoalwater Bay Military Training Area and Townsville Field Training Area was expected to give a huge economic boost to the region and would have made a lot of difference to people’s voting behaviours.”

A petition has since been raised at change.org requesting her resignation to force a by-election; Michelle Landry Must Resign and Force a By-Election.

Labor’s candidate for Capricornia Leisa Neaton said she was disappointed Ms Landry didn’t use the July 2 ballot to stand with the people of the electorate and demand her government rule out forced acquisitions.

“It seems to me she had a powerful lever at her disposal, which could have brought an end to the suffering of the people impacted on by the Shoalwater Bay proposal, but she did not use it. She could have threatened to resign from the Parliament if compulsory land acquisitions weren’t taken off the table,” she told The Morning Bulletin.

“I scored an outcome for the community,” she said.

“No land owner will be forced to sell their property – because I fought for the farmers of Capricornia and took their concerns directly to the Prime Minister.

“While Labor were politically grandstanding I was meeting with the Prime Minister and arguing the case for my constituents. I took this matter to the highest office in the land and got the desired outcome for the community.

“The Prime Minister listened to my concerns, as well as those of the Deputy Prime Minister, and acted decisively – and as a result, nobody will be forced to sell their property.”

On Tuesday, Shadow Agriculture Minister Joel Fitzgibbon attempted to ask Deputy Prime Minister  Barnaby Joyce in the House of Representatives when had be been informed of the proposal. However, the question was ruled out of order by the Speaker.

We need answers to whether the Parliament & community were intentionally misled over Defence land acquisitions: https://t.co/6D7tvInTzL