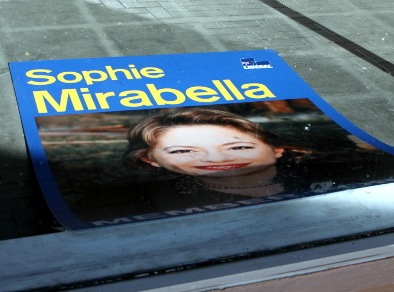 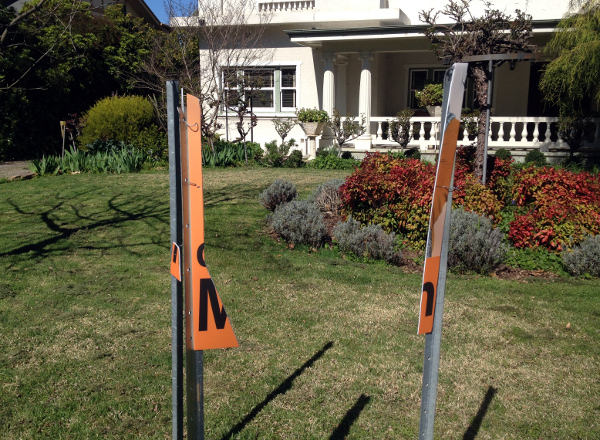 Reports started emerging on Saturday that sitting Liberal MP Sophie Mirabella, fighting to retain the seat of Indi, had shipped in over 20 Young Liberals from her alma mater, the University of Melbourne.

On Monday, her chief rival, independent Cathy McGowan reported dozens of her signs around Indi had been vandalised and stolen in the previous 24 hours. The vandals had entered private property and in one case they would have needed a ladder.

Reports coming in of dozens of Cathy yard signs being stolen or vandalized over the past 24hrs. Watch out as opponents get nasty #indivotes

ABC Goulburn Murray reported on Tuesday morning that McGowan signs had been placed in annoying and illegal locations around the Indi electorate on Sunday night. Cambell Klose, McGowan’s media manager, doubted the signs had been put up by supporters but undertook to remove them.

Sophie Mirabella may yet hold onto Indi, but there is no doubt she’s been knocked for six by the orange-clad hordes of the McGowan campaign.

As of Tuesday the McGowan camp had 500 volunteers. They’re everywhere. If Mirabella prevails, she can thank Kevin Rudd for calling the election for September 7 rather than September 14. Every day that passes, the independent’s camp seems to gather strength and people.

On Wednesday, McGowan took a well-aimed swipe at the Liberals’ broadband policy, after a report that cities and regional towns around Australia will not see an upgrade to their broadband until 2017 if the coalition wins the election, on the judgment that there is “pretty good service now”.

McGowan, a strong proponent of fast broadband boosting regional businesses, said it was “ridiculous to think that infrastructure meant for the 90s is deemed acceptable for 2013 by the Coalition”. Read her full press release here.

Meanwhile, Mirabella is engaged in a massive advertising blitz in local newspapers, and McGowan’s campaigners have been taking time to run cash mobs for local businesses.

Team McGowan cash mob at the Rutherglen florist today. Does it get any more vibrant? #indivotes pic.twitter.com/a74caPp9c4

In a massive blow for Mirabella’s campaign, National party member Ken Jasper came out in support of McGowan late last week. Jasper was the Victorian MP for Murray Valley for more than 30 years.

A Yundool resident who has lived in the electorate for more than 40 years commented: “If Jasper’s supporting McGowan, then she’ll win.” He described Jasper as the most highly respected politician of any level of government in the state’s northeast in his lifetime. “Jasper was always willing to listen to and help anyone … it didn’t mater who you were.”

Jasper wasted no time getting involved in McGowan’s campaign, recording a radio commercial on Monday and later working in her campaign office.

@Indigocathy @margokingston1 Interesting. Independents who win in safe conservative seats, tend to have more notice taken of them by govts. 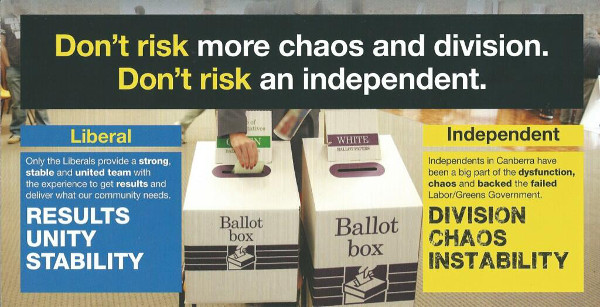 Coalition ad warning of the danger of votes for independents

A voter from the NSW seat of Lyne last week went on record about the benefits of having had independent Rob Oakeshott as their local member:

#indivotes, as a Lyne voter, i recommend ind MPs, had yrs of being taken 4 granted by @The_Nationals @RobOakeshott1 was the best thing 4us

@Jansant @CathieCoaster thanks,+good luck to all candidates this weekend. It is the courageous path to actually have a go. Good luck to all.

The Labor Party started making automated calls to households last Thursday, prompting Mirabella to claim there was a conspiracy against her. But over the weekend a Tungamah resident reported receiving a Liberal Party message on her mobile, saying the service kept calling until she let the message run to the end.

The Liberals are running an anti-independent campaign in Indi, warning independents bring chaos and instability. Their push coincided with a campaign to draw out opposition to marriage equality through flyers naming candidates who support same-sex marriage and telling voters not to vote for them. The flyer in Indi is authorised by J McCormack of Beechworth.

Same-sex marriage is supported by all the main candidates in Indi except Sophie Mirabella. At the recent candidates’ forum hosted by the Victorian Farmers Federation in Wangaratta, Mirabella said: “I unashamedly support the traditional family model. I think the foundation unit in society is a healthy family where a child knows their mother and knows their father.”

Meanwhile, letters of support are flying into local newspapers. Patricia McCormack of Beechworth said in a letter to The Border Mail: “Sophie Mirabella will provide a voice for the good of Indi and Australia.” Garry Bruce of Greta West wrote: “She had many years to get things done under previous Liberal governments, nothing got done.”

Late last week and over the weekend the Coalition indicated their commitment to reducing carbon emissions was not a solid promise, saying essentially the costings behind their Direct Action policy will not change, even if it does not cut emissions as promised.

Asked about climate change at a Mansfield forum, Mirabella indicated her belief that the problem was largely caused by natural warming, but she conceded people were also having an impact.

Climate change is a hot topic in rural areas, so I sought comment from Cathy McGowan regarding her favoured method of tackling climate change. I also wanted to know if she considered Direct Action to be a market mechanism as Mirabella seemed to indicate at Mansfield. Her policy spokesperson Ben McGowan replied:

“The Coalition’s Direct Action policy isn’t a market-based mechanism. Rather, it relies on state intervention to address issues associated with climate change. Market-based mechanisms rely on the state to construct and define a market, in this case for carbon, within which businesses are required to operate. The market-based approach is favoured in our case as it encourages large polluters to reduce carbon emissions in a creative and context specific manner. However, it seems likely that the Coalition will win this election and that Cathy will have to work within the Direct Action approach if elected.”

Lee Luvara, the original candidate for Katter’s Australian Party and an active campaigner for the future of SPC Ardmona, attended the Murray candidates’ forum on Tuesday night. People were live tweeting, and you can catch up on the action by using the hashtag #MurrayDebate.

The Coalition has managed to keep industrial relations (IR) out of the mainstream election debate, but many workers and union officials have grave concerns about the Coalition’s unspoken IR agenda.

I had a chat with the Secretary of the North East Border Trades and Labor Council Chip Eling last Thursday and asked him about Abbott’s recent comments about IR and swinging the pendulum back to the centre. “I find it an utterly deceptive piece of terminology,” he said. He wondered if anyone could indicate a point in time when the pendulum was at the mythic centre.

He said penalty rates were a “real worry”. On the table already were further restrictions on the right of entry and a denial of the right to strike until there had been consultation. That “begs the question what happens when the boss refuses to talk to the union,” Eling said. He claimed most strikes embarked on without discussions were intended to force the boss into talks.

Eling doesn’t think another package like Work Choices will be seen again, but over time all those elements would be reintroduced. He believes Abbott learnt from Howard’s mistake of giving unions a big target like Work Choices, which led them to mobilise the entire movement into action. He believes Abbott’s plan is sophisticated and will attack small groups of workers rather than the entire workforce, limiting their ability to respond.