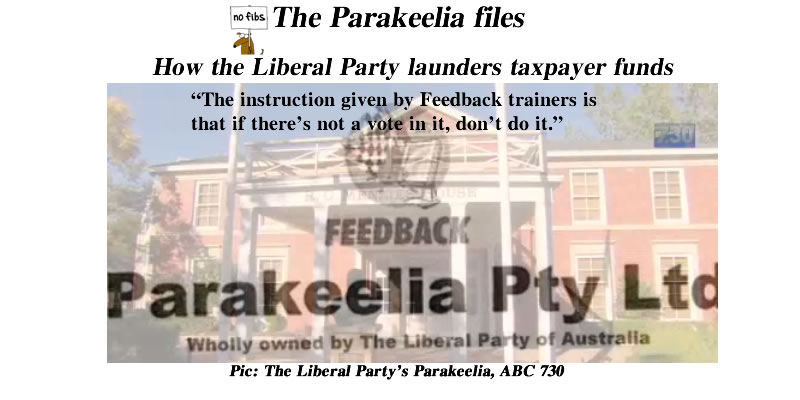 Sky News – Liberal Party associated Parakeelia has as its directors Liberal Party federal director Tony Nutt and president Richard Alston. The company makes large donations back to the Liberal Party. Cabinet Secretary Arthur Sinodinos says it is a legitimate use of taxpayer funds for his office.

Parakeelia Pty Ltd is a wholly owned entity of the Liberal Party with federal party director Tony Nutt and party president Richard Alston as directors. The company was established in 1989 by the then Liberal Party treasurer, Ron Walker and shares the same address in Canberra as the headquarters of the federal Liberal party.

It makes & sells a piece of software called Feedback which MPs and senators purchase for $2,500 using their taxpayer funded office allowance. This allows the party to collate constituent details, requests, issues, etc.

The company makes large yearly donations back to the Liberal Party, effectively laundering taxpayer money. A search of the Australian Electoral Commission shows donor records dating back to 1998-99.

On ABC 730, former Liberal MP for Tangney, Dennis Jensen said, “There was a very clear understanding there’s Feedback training provided to staff members and basically the training is to use it as a database politically rather than to assist constituents. Indeed the instruction given by Feedback trainers is that if there’s not a vote in it, don’t do it.”

ABC 730 – Parakeelia and the shocking abuse of taxpayer money by the Liberal Party.

#Parakeelia I wonder if the Libs misspelt it when they initially set up the company? Or is it unrelated? #ausvotes pic.twitter.com/sBn0e63X99

It has been revealed that taxpayer funded parliamentary staff worked on the Liberal Party’s Parakeelia software, Feedback.

Today it has been clarified that the funds transferred to the Liberal Party from wholly owned Parakeelia are classed as “other receipts” for Australian Electoral Commission purposes and not as “donations”.

There are no donations from #Parakeelia to the Liberal Party, claims CHQ #ausvotes https://t.co/vEtfm1ThEc pic.twitter.com/84QWuFuVA4

@vanOnselenP Here is a handy map which explains the double dip pic.twitter.com/qwTl57qeB5

Malcolm Turnbull and Mathias Corrman have both referred questions over the Parakeelia scheme back to the Liberal Party management. Turnbull commented that the practise of supplying software to Liberal MPs has been going on for many years.

ABC News 24 – Malcolm Turnbull says Parakeelia a matter for the party but has been in place many years.

I asked Mathias Cormann 4 questions about #Parakeelia this morning. Here they are, and his responses. pic.twitter.com/3qGwQhjp2r

Shorten on #parakeelia: I've asked my SMOS to write to the Auditor-General today to investigate this scam as a matter of urgency.

Shorten on #parakeelia: Mr Turnbull needs to get off the fence and stop being in denial about the scam.

Meanwhile, Malcolm Turnbull, Mathias Cormann and Tony Nutt have continued to deny there is anything unlawful about the scheme.

Also, records provided by the initiator of the scheme, former Liberal Party treasurer Ron Walker, show Malcolm Turnbull would have been aware of the scheme when he took over the treasury role in 2002.

Malcolm Turnbull was responsible for #Parakeelia from 2002. #ausvotes #qldpol pic.twitter.com/bpRwbvLU9g

ABC The Drum – What do controversies like #Parakeelia do to voter trust?

ABC Insiders – Bill Shorten has referred the Parakeelia scheme to the auditor-general. Meanwhile, Malcolm Turnbull continues to distance himself from the entity.

ABC News 24 – Bill Shorten says Malcolm Turnbull needs to clean up his party on donations and the Parakeelia saga.