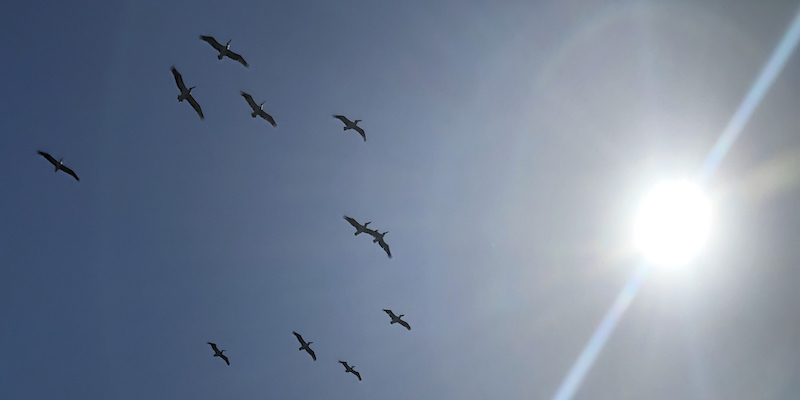 It was a funny old week during which not a lot happened publicly, apart from preparations continuing behind the scenes for that moment Scomo says go!

The big difference was that unlike last week — when it took a 6am start to allow time to drive over to Kerang and Pyramid Hill — this time the campaigning was as local as it could possibly get.

I left home at precisely 9.53am and was at my destination, parked and on-site, before 10.00am, because Ray Kingston the Independent for Mallee (@malleeray) was doing a meet-and-greet at the Jung Market.

The markets are held once a month and attract hundreds of people from Horsham and surrounds to one of the prettiest settings you’ll find anywhere. The Yarriambiack Creek flows around it, trains roll past it, the footy scenes in The Dressmaker were shot there and as you can see from the photo the trees are magnificent. But enough of the tourist pitch… there was work to be done.

This is also Ray’s patch. He lives not far away and as you’d expect people knew him and were up for a chat. What was different — and I have no explanation as to why — is that it looks like people have started tuning in to the election.

For the first time, some drivers honked when they saw Ray’s signs on our trailer. Others noticed the ‘Vote 1 Ray Kingston’ badge that I’d been wearing without attracting any comment for the past couple of weeks. At the market most of the talk was around water.

Water is a dominant issue for this campaign, but while the debate in the north of the electorate centres around the Murray-Darling Basin system and the many vexed issues still be resolved there, in the Wimmera the talk is more of drought, floods and flood mitigation. The bottom line, however, remains the same: without water agriculture and horticulture are both stuffed. People want certainty.

For someone who wasn’t born in the Wimmera, the ties that bind here are incredible. For example, the Jung Market is run by the impressive Pam Baker; the main street of Jung is Baker Street, and I bought my house from… a baker.

Part of one conversation was about events that happened close to 100 kilometres away but still well within the boundaries of Mallee. I quipped that care was needed because the partner of one of the people we were talking about is a local journo.

About a minute later, out came: “You mean ……. it took me a moment to place them”, then Ray chimed in with: “I went to school with them”.

Cue a chat about whether they were a year ahead or behind, and where the other siblings fitted in.

There is a complex pattern of family and personal relationships weaving through the western half of Mallee that will swing votes. If there’s a bored political scientist out there, this would be worth your time.

The above conversation took place not far from a wheelie bin and while it was going on two men in hi-vis gear walked up. One grabbed the lid of the bin and started opening and closing it like a mouth, and said: “This week the National Party said”, and continued: “This week the Labor Party said”.

They said a quick g’day and having made their point walked away smiling. I assumed they were more of Ray’s mates; but no, he didn’t know them either… but I reckon he’s got their votes.

A candidate does not live by bread alone and before leaving the markets Ray had a Florrie Horsham ’s signature dish.

If you want to sample a Florrie — and you should — then you need to head for Horsham. But for me there is no finer Florrie to be had in all the world than at the Jung Market because only there will your Florrie have been prepared with love by the women and men of the mighty Minyip Murtoa Kookaburras Football Netball club, @theBurras.

Yes I’m finishing the phoney war part of this election with a gratuitous plug for my local team. Come the next instalment I suspect the starting gun will have been fired and it will be on for young and old.