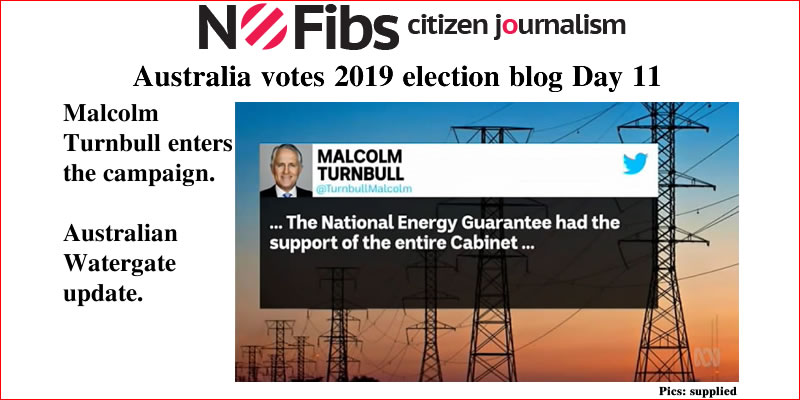 Malcolm Turnbull has entered the campaign to defend the National Energy Guarantee (NEG) from becoming attributed solely to him.

Mr Turnbull posted a series of seven Tweets explaining what the NEG was and what it was not.

Michael West reported, “It is extraordinary that the profit from Barnaby Joyce’s record payment for Australian water rights — a $80 million payment of taxpayers’ money — found its way to a company in the Cayman Islands which had been set up by Angus Taylor, a company at which Taylor had been a director for six years.” Barnaby Joyce, Angus Taylor, Australia and the Caribbean.

Barnaby Joyce has not been seen in public for many days. His staff had told journalists that he was out mobile phone range and couldn’t be reached. However, during the ABC Insiders program this morning he texted panelist Patricia Karvelas live on the show to say he was not involved in the negotiations around the water buy-back deal with Eastern Australia Irrigation.

Katharine Murphy and Anne Davies reported, “Labor has given Scott Morrison a deadline of Monday to address questions about the 2017 water buybacks, and has not ruled out establishing a royal commission probing the various transactions in the event Bill Shorten wins the 18 May contest.” Calls mount for royal commission into controversial Murray-Darling water buybacks.

Anne Davies was also interviewed by The Project. Having reported on the Murray-Darling river system for a number of years, she felt that this latest saga did warrant a full inquiry into the entire system which spans four states.

Barnaby Joyce’s office also released a statement to The Project criticising their report.

“In regard to the report on The Project by Hamish Macdonald on Thursday 18 April, 2019 the details conveyed, both in inference and fact, were reckless and may be deemed vexatious as the correct information could easily have been obtained by contacting the Department of Agriculture and Water Resources.” More at their Watergate webpage, Hamish Investigates: Did the Government Just Waste $80-Million Buying Water?