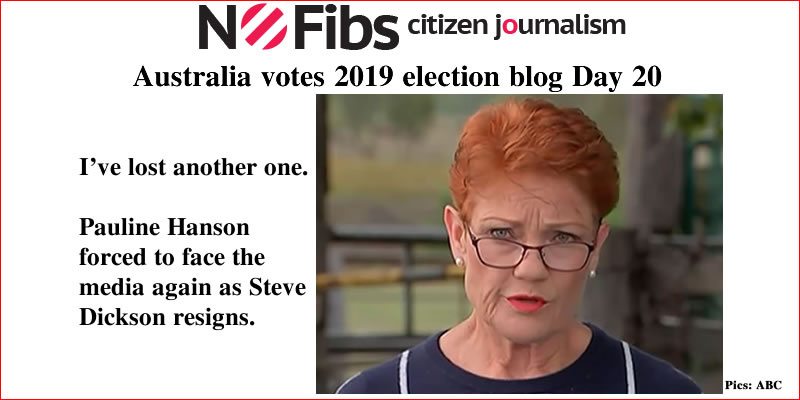 The Nationals and One Nation closely aligned, says Michael McCormack

Clermont horseman breaks down in court

Pauline Hanson has lost her Queensland state leader and senate candidate, Steve Dickson, after footage emerged on A Current Affair (ACA) of him making sexist and racist comments inside an adult entertainment club. It’s her first candidate loss of the campaign. In previous state and federal elections around the country she generally loses two or three candidates due to a range of indiscretions.

This morning Ms Hanson said she had accepted Mr Dixon’s resignation from her party, Pauline Hanson’s One Nation (PHON), and labelled his language and behaviour unacceptable.

The video had been recorded last year during a trip to the United States in which Mr Dickson and Ms Hanson’s chief-of-staff, James Ashby, were filmed speaking to gun lobbyists about how to raise donations for PHON. They were also filmed discussing strategies with the National Rifle Association on how to change Australia’s gun laws. How to sell a massacre.

Ms Hanson denied in March that PHON had traveled to the US to deliberately seek donations from gun lobbyists. She accused the media of a conspiracy to bring down PHON, namely the Qatar-owned Al Jazeera network for running the sting and the ABC for screening the report across Australia. She demanded that the full, raw footage of the US trip be released by Al Jazeera.

Asked today if she was worried about more raw footage being released on top of that involving Mr Dickson, she replied no. She went on to reject that any donations were ever sought by PHON from the NRA.

Al Jazeera released a statement saying they did not authorise the footage of Mr Dickson to be screened on by ACA. They had not included it as part of their story because it was not related to the issue of gun law changes.

Prime Minister Scott Morrison distanced himself from the scandal and the preference deal between PHON and the Queensland LNP in some seats.

“They are their own party. I don’t tell the Nationals how to run their political campaign,” he said.

However, the problem in Queensland is that the Nationals and the Liberal Party are one party.

Lastly, very punny, Amber Austin-Wright who concluded tonight’s 10 News with, “Just how many (may be offended) will be revealed when voters bare all on May 18.”

The Nationals and One Nation closely aligned, says Michael McCormack

Michael Koziol and Fergus Hunter reported, “The fact is [Pauline Hanson] acknowledges that our policies are more closely aligned with the interests and wants of her voters than the Greens or Labor,” he told The Sydney Morning Herald and The Age in Mackay on Monday.” ‘It just makes sense’: Nationals leader Michael McCormack spruiks ‘deal’ with One Nation.﻿

At the National Press Club in Canberra today he backed this up by stating he would do ‘what it takes’ to get votes and win the election.

The remarks echo Qld LNP MP for Dawson, George Christensen, who stated in 2016 that the two parties were ‘birds of a feather’.

In contrast, former Qld Nationals senator, Ron Boswell, has long spoken out against doing any deals with Pauline Hanson. He maintains that the Nationals and the Qld LNP need to challenge the rise of One Nation on policy. Former Senator Ron Boswell hits out at One Nation preference deals.

Clermont horseman breaks down in court

The Clermont horseman who rode through the camp of an anti-Adani group on Sunday has cried in a Mackay court. Clinton Morris McDonald was charged by Queensland police with “dangerous operation of a vehicle [namely a horse] causing grievous bodily harm”, common assault, trespass and obstructing police.” Horse rider accused of injuring anti-Adani protester receives warning from magistrate.

A woman remains in hospital after being injured when Mr McDonald collided with the showground gate. It was revealed in court that he works as a truck driver in the coal industry. Queensland LNP Senator Matthew Canavan, who had spent Sunday with the pro-Adani campaigners, said Mr McDonald had no connection with the group.