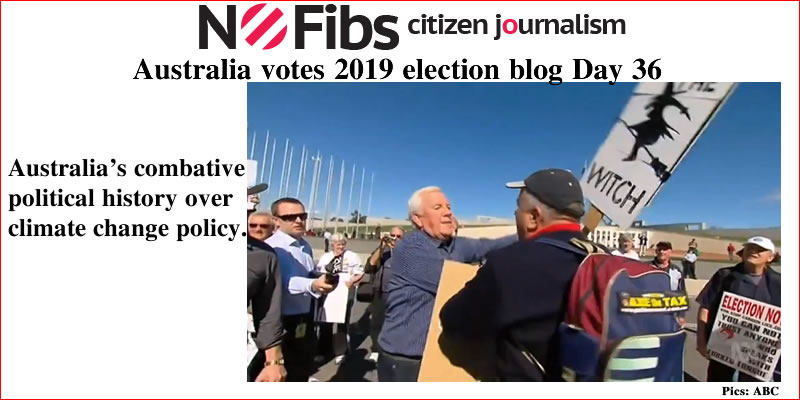 A student and first time voter in Higgins

Standing with a nervous nation that still believes

Bill Shorten rallies with a “vote for change” speech

In the latest episode of the No Fibs podcast Margo Kingston meets Jeremy Miller in person to catch up on how his campaign as an Independent candidate for Lyne has progressed.” Jeremy Miller is running to win Lyne.

A student and first time voter in Higgins

Lesley Howard reports, “Imi is 18 and a first-time federal election voter. She is currently completing Year 12 and is studying Australian Politics for VCE. She will be voting in the inner metropolitan seat of Higgins, in Melbourne.” A student and first time voter in Higgins.

One of Clive Palmer’s advertisements that has bombarded Australians from the start of this year was a rework of the Twisted Sister song, “We’re not gonna take it”, the band has claimed.

Michaela Whitbourn reported today that, “Clive Palmer has refused to admit he exerts “palpable control” over the political party he founded, as he defends a copyright infringement case brought against him by US metal band Twisted Sister over its hit We’re Not Gonna Take It.” Clive Palmer insists he’s in the clear in copyright spat with Twisted Sister.

Standing with a nervous nation that still believes

Margo Kingston comments, “We await the people’s verdict on May 18, but I’m panicking.” Standing with a nervous nation that still believes.

Yesterday, there was a disagreement over the impact of Labor’s negative gearing policy on the property market. It had been implied that journalist, Samantha Maiden, had “taken out of context” a response from SQM Research on a negative gearing report. You can skip back to that here, Scott Morrison campaigns in Corangamite on housing.

Today, Ms Maiden was at the National Press Club (NPC) to ask Prime Minister Scott Morrison if he had made any changes to negative gearing himself when he was treasurer and if he costed those.

It comes as home loaner Yellow Brick Road founder and Celebrity Apprentice Australia host, Mark Bouris, used robocall to campaign against Labor’s changes to negative gearing. However, he appears to have breached regulations by not authorising them.

After promising their jobs were safe before the election, Queensland premier Campbell Newman famously cut 14,000 workers from the Queensland public service. 14,000 jobs to go but no sackings: Newman.

Wayne Jansson reported, “At pre-poll in Wangaratta on Saturday, Senator Bridget McKenzie refused to provide the cost to our economy of not taking swift and decisive action against climate change.” Nat senator sees ‘great hoax’ in climate action.

PM Morrison empowered voters with an important choice on Saturday.

Bill Shorten rallies with a “vote for change” speech

Opposition leader Bill Shorten spent the morning in the Liberal-held seat of Reid before traveling to Blacktown in Sydney’s west.

Data suggests that action on the environment has reached its highest ever level as an election issue, with 68 per cent of respondents to ABC Vote Compass agreeing with the government putting a price on carbon, up from 46pc in 2013.

While the Coalition continues to fully support new coal mines, the Greens want a ban on new thermal ones and Labor is happy to sit in the middle lane. The latter two parties have developed a ‘Just Transition’ policy which aims to help workers and communities migrate to the renewable energy industry.

Meanwhile in the South Pacific, some leaders of nations at threat of rising sea levels want the Coalition out of government so that proper climate change policies from Australia can be implemented.

Senator Jim Molan is campaigning for senate re-election with a below-the-line how-to-vote (HTV) card which is against the official Liberal Party HTV. Barnaby Joyce claims this breaches the Coalition agreement between the Nationals and the Liberal Party. Mr Joyce said it was not a personal attack on Mr Molan but the National Party needed to stand up for its end of the agreement. He warned the rebels, “Your result will be ashes in your mouth.”

Malcolm Farr, “Liberals are bitterly divided over a rebel conservatives’ bid to claim a Senate spot in NSW and today the Nationals joined the unrest by warning the Coalition vote was being fractured.” Barnaby Joyce weighs into Liberal Party Senate stoush.